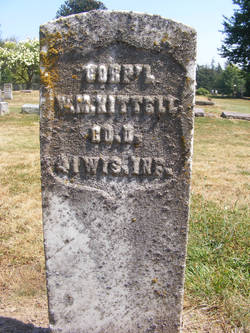 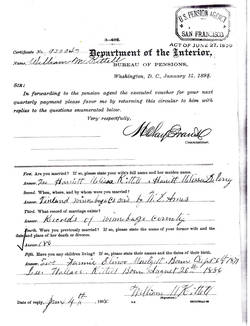 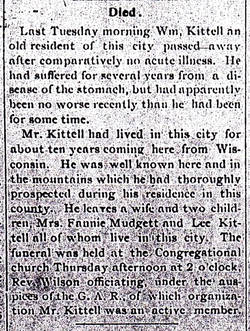 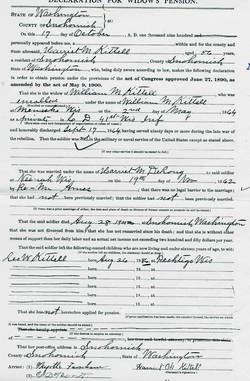 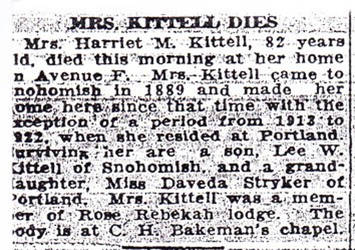 In the spring of 1864 Union Gen. U.S. Grant’s armies opened the final chapter in America’s War of The Rebellion. In an effort to free up seasoned soldiers for actions in the field each state was requested to raise a number of “100 day” regiments to primarily perform garrison and railroad guard duties.

The 41st was the third, and final, such regiment formed in Wisconsin.  On 6/15/64 the 41st left Wisconsin for Memphis, TN.  As the unit had only 576 recruits it was not considered a complete regiment and therefore not allowed to elect a colonel.

The 41st only exposure to combat was in support of the 39th and 40th Wisconsin during a confrontation with Gen. Nathan Bedford Forrest’s Confederate cavalry. In common with sister regiments, the 41st suffered greatly from disease.

NOTE: The original birth – to – death biographical profile on William Kittell was written during the early years of the Civil War Veterans Buried In Washington State project. As a result it was limited in both size and the availability of research resources. The biography which follows was created in March, 2019. While it is more extensive than the original, it still lacks the depth of detail found in more recent entries to the website which draw heavily upon veteran-related documents housed in the National Archives located in Washington, D.C.

* ED. NOTE: Alternate spellings of William’s surname include Kitell and Kittel.  For our purposes the spelling presented in military records and in the veteran’s obituary is used herein.

Corporal Kittell’s wartime service tenure was apparently benign.  There are no records of illnesses, wounding, attendance or behavioral problems.

In 1875 the Kittells were residing in or near the community of Peshtigo located in Oconto Co., WI. In the 1880 U.S. census found them again in Peshtigo, but that that year the community was part of Marinette County.

In 1889 William, three of his army buddies – Dewitt Parker, Christopher Winehart and Enoch Hayes - and their families moved from Marinette Co., Wisconsin to Snohomish County located in the Puget Sound area of Washington Territory/State.  Why the move?  Available documents do not provide a direct answer. For some it may have been the availability of new farm land. For others, perhaps, like William, it was the lure of gold and other minable riches. The Kittells made the move westward by rail.

The 1900 U.S. Census for Snohomish, WA noted William’s occupation to be “mining prospector.” He died the same year and his obituary noted: “He was well known here and in the mountains which he had thoroughly prospected.”

William died 8/28/00 after having “suffered for several years from” disease of the stomach.”  Still, his obituary noted that his illness was not acute and did not appear to have gotten any worse prior to his demise.

At the time of his death veteran William Kittell was receiving a $6 per month government pension  based on physical conditions or ailments which traced back to his days of Civil War soldiering. . Burial was/is in the Grand Army Of The Republic (G.A.R.) Cemetery in Snohomish, Snohomish Co., WA which he and his Wisconsin army friends helped found.

William and Christopher Winehart are buried in the G.A.R. Cemetery. Dewitt Parker and Enoch Hayes ultimately moved to Cowlitz County. Both died in Kelso, WA. Sadly, their families were too poor to have their remains transported back to Snohomish where G.A.R. Cemetery plots awaited their earthly remains.

Harriet died 12/9/26.  At the time of her passing she was receiving $50 per month based on her late husband’s Civil War pension.  Harriet was/is buried beside William.