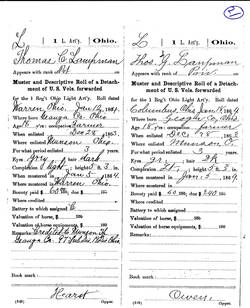 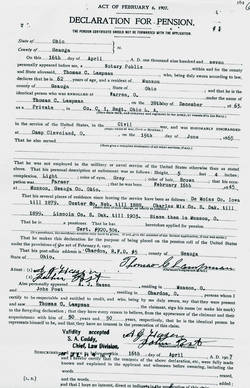 Note: During the American Civil War an infantry or cavalry regiment could generally expect to serve together as an entity.
Such was not the case for artillery regiments. These seldom, if ever, served as a cohesive unit. Instead, individual “batteries”
"(companies)"  usually 6 or 4 guns- were assigned where needed. As such, there we are not focusing on the history of the "entire" 1st Ohio L.A., but on that of Battery "C".

Part of a two year regiment, Battery "C" left Ohio almost immediately after Federal muster and seemingly never slowed down in terms of being combat active until the end of the war. A “western theater unit,” the battery served in a “who’s who” series of engagements throughout Kentucky, Mississippi, Tennessee and Georgia during its initial enlistment.

After re-enlisting in 1/1/64 the "1st " went on to march with Fed. Gen. Sherman to Atlanta and, then, on to Savannah and the sea. It then continued with Sherman as his army tramped northward through the Carolinas. Participation in the Washington D.C. Grand Review preceded final muster.

NOTE: The original birth – to – death biographical profile on Thomas Lampman was written during the first years of the Civil War Veterans Buried In Washington State project. As a result it was limited in terms of both size and research resources. The biography which follows was created in April, 2019. While it contains many more details than the original it still lacks the depth of more recent additions to this website which draw heavily upon veteran-related documents housed in the National Archives located in Washington, D.C.

In the latter days of December, 1863 Thomas, a young farm laborer, enlisted in the U.S. Army.  However, his Federal muster date was not until the following month, thus making him a “recruit of 1864” and eligible for an enlistment bonus or “bounty” payment of, perhaps, $300, a portion of which was generally paid up front with the balance coming in later increments.  Available documents contain no other significant notations on Private Lampman’s military tenure.

The War behind him, Thomas returned to Munson, Ohio. It was there the U.S. Census for 1870 found him working on his parents’ farm.

Not only did the child, Ralph, die, but so did Jane - most likely from childbirth complications. Her death date was 12/25/83.  Thomas never remarried.

As noted by the birth states of Thomas’ and Jane’s children, the couple first began growing their family in Iowa. By the time of the death of both their last child and Jane, the family was in in Precinct 6 of Custer Co., NB. What had prompted the Nebraska move and exactly when it occurred is not known.

Following his wife’s death it is not clear if Thomas continued to raise his children as a single parent or left that task to others because his life history, from this point onward, points toward his gradually moving west working as a hired hand on one farm after another.

By 1897 the 41-year-old Union veteran was living in South Dakota.  There he first applied for a  U.S. Government disability pension based on  ailments and physical problems which traced back to his days of Civil War soldiering. In Thomas’ case these included rheumatism, ankle and knee problems as well as liver/kidney ailments and stomach upset.  He was also regularly plagued by “La Grippe”, a serious chest cough.  The ankle problem would later be traced to a childhood accident while the stomach upset would be attributed to having been kicked by a horse in 1872.

By 1907, after a return to Ohio, and, apparently, some time in Colorado, John Lampman was living in Washington State.  Why he came to the Puget Sound region of the Pacific Northwest is not clear.  However, he stayed.

On 6/30/26 at the “Lake Roesiger district”, Snohomish, Snohomish Co, WA.  home of his grandson, with whom he had resided for the previous two years 80.6 year old former artilleryman Private Thomas C. Lampman died.  The obituary noted that he was survived by a son, John of Ohio and a daughter, Mrs. Carrie Callar of Lake Roesiger.

Burial was/is in the Grand Army Of The Republic (G.A.R.) Cemetery in Snohomish, Snohomish Co., WA.