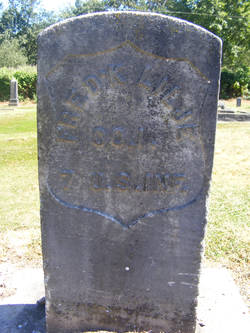 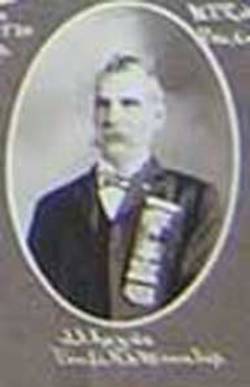 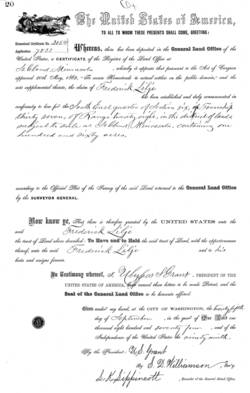 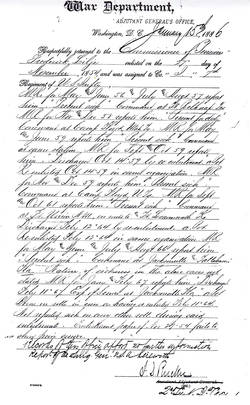 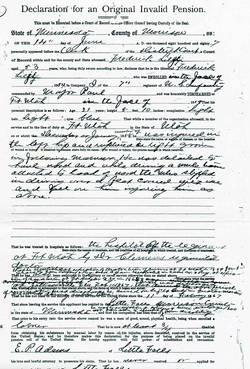 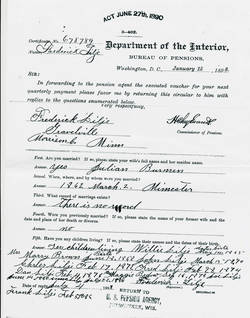 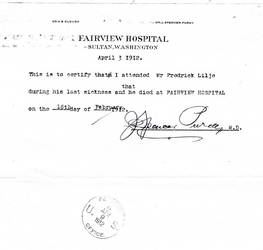 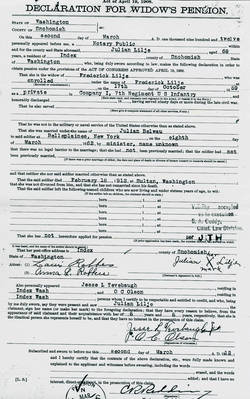 The 7th was one of only 19 infantry regiments in the U.S. Army at the beginning of the War of The Rebellion.  Stationed at Ft. Fillmore New Mexico, in mid 1861 it had the dubious distinction of having itself surrendered to a numerically inferior rebel force without ever firing a shot.

Paroled and exchanged, the 7th joined the Army of the Potomac with whom it participated in the battle of Fredericksburg, VA, December, ’62, the “Mud March” January, 1863, the Chancellorsville Campaign April/May ’63 and the Gettysburg Campaign/Battle, June and July, 1863.

NOTE: The original birth – to – death biographical profile on Frederick Lilje was created during the early years of the Civil War Veterans Buried In Washington State project. As a result it was limited in both size and the availability of research resources.

The biography which follows was written in April, 2019. Although it contains many more details than the original, it still suffers from a lack of depth when compared to more recent additions to this website which draw heavily on veteran-related military, pension and other documents housed in the National Archives located in Washington, D.C.

Frederick Lilje was born during 1835 in Prussia/Germany.  No birth month or date has been located in available documentation. Further, no details are available on his parents, possible siblings or his formative years.

While no documentation has been found indicating when Frederick arrived in America, in 1854 at the age of 21 the 5’10”, blue-eyed laborer entered the U.S. Army.

In early1857 Private Lilje was stationed at Ft. Belknap, TX. By mid- year he was at Camp Floyd, UT.  It was there in December, 1857 or January, 1858 that Private Lilje was reportedly injured while on a wood hauling detail.  Driving a mule team the mules slipped on ice and fell on him thereby injuring his left hip and rupturing his left groin.  As a result of the accident it appears Frederick was, throughout the remainder of his army tenure, assigned to “light duty” with the quartermaster.

Aside from this injury (of which no military records could later be located) and suffering “unspecified illnesses” from time to time, Frederick’s career in the Army was uneventful.  One documental notation raises the possibility that Frederick was forced to leave the military because, with America’s civil war having ended, his “light duty” status prevented him from reenlisting.

As noted by the states in which the Lille children were born, it appears that after their marriage Frederick and Julia likely initially settled in New York. By 1867, however, they had removed to MN  where they first resided in  Stearns Co., before moving onto homestead land in Maywood, Benton Co. Interestingly, .Frederick received the patent [deed] to the homestead tract in 1874, but the following year their address shows as Gilmanton, MN. Further, In 1885, their address was Belle Prairie Morrison Co., MN while in 1895 it was Little Falls Morrison Co, MN. Did they really move that many times? Finally, how does one explain Charles being born in Arkansas in 1872?

Although Frederick spent a great portion of his post-army life working as a farmer, he still had difficulty performing manual labor because of his army-related injuries. On 6/2/93 perhaps these handicaps helped him acquire the position of postmaster of the community of Gravelville located in Morrison Co., MN.

In 1905 Frederick, Julia and son Frank were living in Little Falls Morrison Co., MN. Frederick was not employed.

Sometime after 1905 the Liljes packed up and moved from Minnesota to Washington State.  Exactly when the move was made is not known. As for why it was made, perhaps it was to be near the families of one or more of their adult children. Their initial place of settlement was in the small town of Index located in the foothills of the Cascade Mountains in Snohomish County.

At the time of his death the 78/79-year-old veteran was receiving a $24 per month U.S. Government disability pension stipend based on ailments or other conditions which traced back to his days of Civil War soldering. .  Applying for widow benefits from her late husband’s policy, Julia, aided by daughter Anna, made “her X mark” on the pension papers.

At the time of her death on 4/18/13 Julia was receiving a pension of $12 per month. She was/is buried beside Frederick in Snohomish.