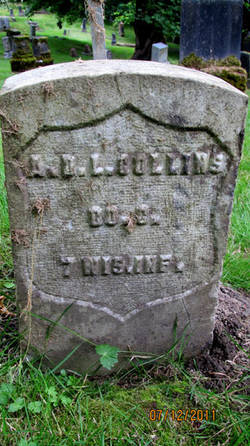 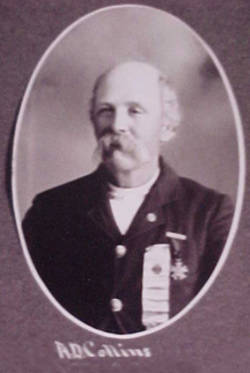 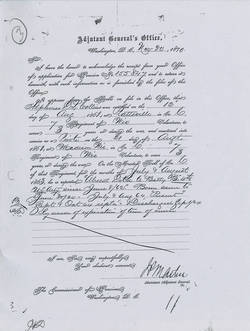 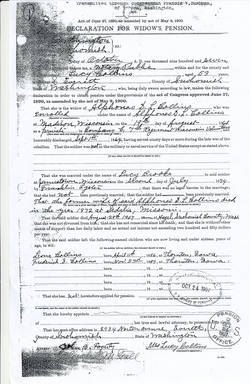 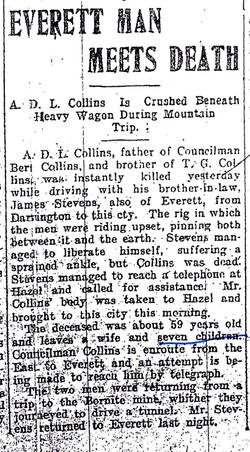 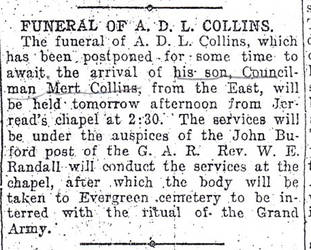 The 7th, a three year eastern theater regiment that compromised 1/5  of the famous “Iron Brigade,” participated in all the major campaigns of the Army of The Potomac from Union Gen. Pope’s 8/62 retreat from 2nd Bull Run through the surrender of Confed. Gen. R.E. Lee’s Army of Northern Virginia at Appomattox Ct. House, VA on 4/9/65.

The wide brimmed black hats worn by the 7th and other regiments of the Iron Brigade became a visual symbol of hard, courageous fighters.  Regimental losses: 385 deaths, 12 missing, 44 desertions, 106 transfers and 413 discharged.

Alphonso D.L. Collins was born 4/6/42 in Allegany Co., NY to Timothy Gilbert (b. ca. 1813) and Rachel Rebecca (nee Wilson b. 1818) Collins.  His birth family included at least one brother (T.G.) and one sister (later Mrs. James Spicer).  No information is available pertaining to his childhood, formative, or early teen years.

In the summer of ’61 the 5’7”, light complexioned teenaged farmer answered his country’s call to arms and enlisted in the U.S. Army.  While his regiment, the 7th WI participated in a “who’s who” list of battles fought by the Army of the Potomac, Alphonso, saw a majority of those battles not as an infantryman, but from the point of view of an artilleryman.

On 6/8/62 Private Collins was detached from the 7th and assigned to Battery B, 4th U.S. Regular Artillery.  Likely the assignment was a voluntary one.  Alphonso remained an artillerist until returned to the 7th on 8/8/64, a short time before being discharged from the service.  During his time with the artillery Private Collins was reportedly wounded on 7/1/63 during the first day of fighting at Gettysburg, PA.  Available records do not reflect the nature of the wound, so it was probably not serious.  In later years, however, the wounding likely contributed to Alphonso seeking and being granted a U.S. Government invalid pension based on his years of Civil War soldiering.  At death his stipend was $8 per month.

With the war behind him, Alphonso returned to Grant Co., WI where, on 11/12/65 he married Roxey Jane Works (b. 1843 Paris, Grant Co., WI).  While in pension records Alphonso would claim only three post-war states of residence- Wisconsin, Iowa and Washington- the couples’ only child Asa (or Aca b. 1868) was born in Missouri.  Also, it was in 1872 in Sedalia, MO that Roxey died.

The next, approximately 17 years were spent living in three locations within that state before, circa 1903, they moved to Everett, WA.  Why the latter move was made is not documented, but likely it was to be near the family/families of adult children.

On 8/29/07 while Alphonso and his brother-in-law James Stevens were returning from Darrington to Everett via horse and wagon, the wagon turned over near the community of Hazel pinning both men between it and the earth.  James, suffering from only a sprained ankle, was able to extract himself from the wreck and summon help.  65.4 year old Alphonso, however, was killed.  The subsequent fate and passing date of Lucy are not known.