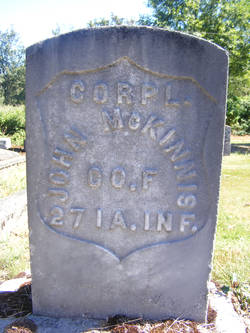 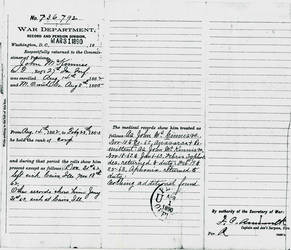 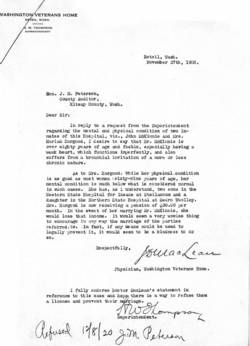 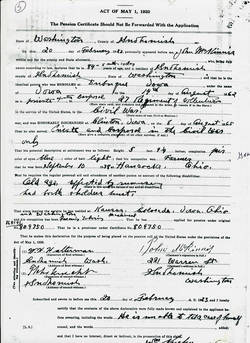 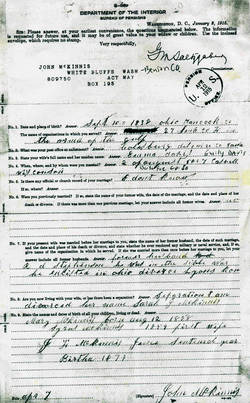 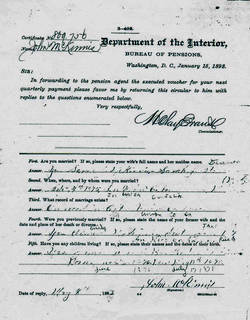 The 27th, a three-year unit, was active throughout the “western theater” almost from the day it was mustered into Federal service.  Its initial 1862 assignment involved elements of the 27th taking part in the campaign against Indians waging war on Minnesota settlers.

The entire regiment then assembled at Cairo, IL. From Cairo it moved into Mississippi where it ultimately spent the winter suffering greatly from sickness because previous campaigning had been without blankets or rations.

1863 found the 27th clashing with guerillas and performing railroad guard duty in Tennessee and Arkansas.  1864 saw the unit at Vicksburg, MS, involved in the Red River Expedition, and under fire in Louisiana locations such as Pleasant Hill, Grand Encore, Marksville, and Yellow Bayou.

February, 1865 found the Iowans embroiled in operations around Mobile, Alabama, including the final assault on Ft. Blakely.  Garrison duty and a stay at Montgomery capped off the regiment’s career.

NOTE: The original birth – to – death biographical profile on John McKinnis was written during the early years of the Civil War Veterans Buried In Washington State project. As a result, it was limited in terms of size and the availability of research resources.

The biography which follows was created in April, 2019. While it is more detailed than its predecessor, it still lacks the depth of more recent additions to this website which draw heavily upon veteran-related documents housed in the National Archives in Washington, D.C.

By the time of the 1850 U.S. Census tally the McKinnis family was living and farming in Dubuque District 7 Dubuque Co., IA.

In September, 1862 John, 5’ 9 ¼” farmer/laborer, entered the U.S. Army as a corporal.  By November, while at Cairo, IL Corporal McKinnis had contracted typhoid fever which resulted in his remaining there in the hospital while his regiment moved on.  Returning to duty at the end of February, 1863. Corporal McKinnis requested- perhaps because he had been away from the 27th for an extended period of time and unable to perform necessary duties - and was granted a demotion to the rank of private.  On 4/15/64 he regained his corporal stripes.

Available documents are not clear as to whether or not Mr. McKinnis immediately returned to Iowa and his family following his separation from the military.  However by early 1870 the McKinnis’s were farming in or near Franklin located in Allamakee Co., IA.

Now things become somewhat murky in John’s time line. According to one documental source, in the early 1870s the Mckinnis’s moved to Rice Co., KS where Emily died.  Based on recent documental findings, however, in 1880 Emily was residing in Honey Creek Delaware Co., IA. In her home were her adult children Mary and Cyrus. She did not die until 12/15/00. She was/is buried in Grant View Cemetery in Delaware Co., IA. The only conclusion that can be drawn from this series of events is that John and Emily separated and divorced………………….

In 1880 John and Sarah were living in Des Moines Polk Co., IA. There his occupation was listed as “laborer.” They were still in Des Moines as of 1885.

In 1889 at the age of 51 years, John applied for a U.S. Government disability pension claiming that he had never fully recovered from typhoid fever contracted while in the army. The disease had since lead to him having problems with his eyes and kidneys.

1900. A new century, a new decade and a new census. Interestingly, population tallies of 1900 found John and Sarah in two locations. One was Des Moines. The other was Sugar Loaf Boulder Co., CO where they were under the roof of married daughter, Bertha, and her husband, Luther Yockey. Sarah was with the Yockey’s in 1910, too. Of interest is the fact that she noted she was widowed. Who had widowed her? Her first husband? John McKinnis?

We don’t know if Sarah’s first husband had passed on by 1910, but we do know that John McKinnis had not. Still, it appears he and she had separated and, perhaps by that date, divorced.

While we do not know where John was residing in 1910 we do know that he was still alive. In 1915 he was living in White Bluffs Benton Co., WA. Further, in 1920 he was a resident of the Washington State Veterans’ Home located in Retsil Kitsap County.

1915 found John in White Bluffs, Benton Co., WA.  No details are available on this period of his life.

As of 1920 the aging Civil War vet was Washington Soldiers’ Home in located in Retsil, Skagit Co., WA While there he apparently met Marian Eargood, a resident of Snohomish, WA and widow of ACW veteran John Eargood (Grand Army Of The Republic (G.A.R.) Cemetery Snohomish, Snohomish Co., WA Row 23 Site 6). The two married on 9/7/21 and set up household in Snohomish

After his marriage to Marian and their move to Snohomish Mr. McKinnis’s health declined markedly. On 5/4/23 at the age of 84.7 years of age, he died.  At the time of his death, based on his days of Civil War soldiering and his 1889 pension application, he was receiving a $50 per month disability stipend from the U.S. Government.

Later, in 1923, the third Mrs. McKinnis was reportedly back living in Retsil, WA.  Marian died 11/18/1940 in Seattle, WA. The location of her final resting place is not known.