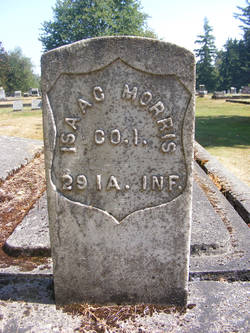 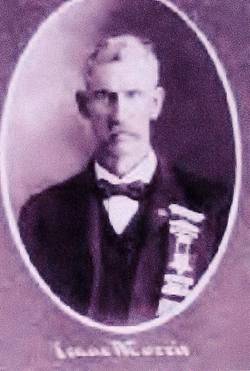 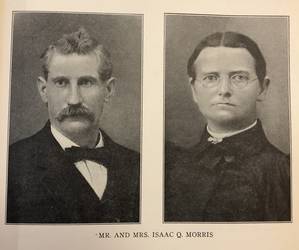 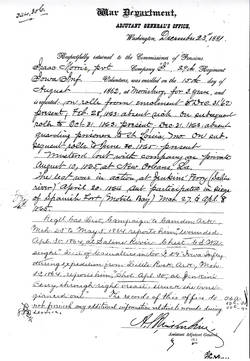 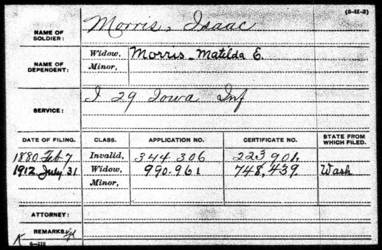 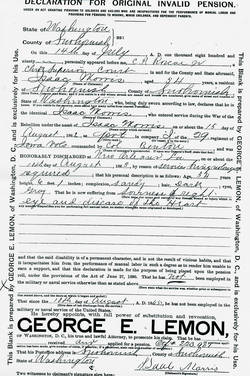 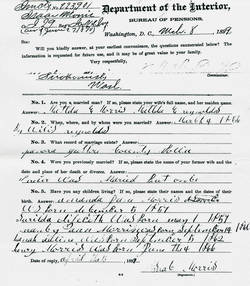 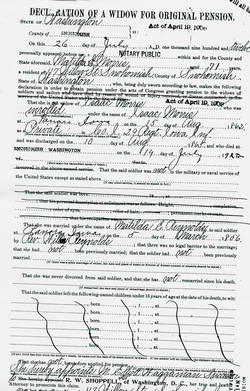 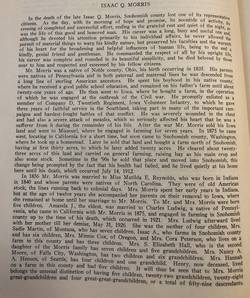 Following its organization the 29th served prison guard duty in Missouri before moving to Arkansas and Kentucky. It returned from the 1863 White River expedition with 400 sick. Nearly 300 of those were lost by death and disability.

Next came the Yazoo Pass expedition, garrison duty, scouting and the battle of Helena, AR. In the spring of 1864 combat sites included Camden, Terre Noir Creek and Jenkins Ferry. The regiment lost 142 killed, wounded and missing that spring. In early 1865 the unit moved into Alabama.

In June of the same year it sailed to Texas, but was retuned to Mobile where it ceased to exist on 9/10/1865.

NOTE: The original birth-to-death biographical profile on Robert Ackley was created in the early days of the Civil War Vets Buried in Washington State project. As such, it suffered from limitations in size and resources to be drawn upon for its writing. What follows is an up dated profile written in May, 2018. While it provides many details not available in the original, it still does not reflect the depth and degree of research resources from the National Archives in Washington, D.C. utilized in recent biographies.

In 1862 the 6’1” Isaac then residing in Guthrie Co. Iowa, enlisted in the Union Army.  During his three-year enlistment Private Morris was severely wounded in the chest during the battle of Jenkins Ferry, Arkansas (8/30/64) and suffered from an attack of the measles.  Although the wounding was serious, it was actually the latter that affected him the remainder of his life.

Following the end of the War Isaac returned to farming in Iowa but by 1870 he and his family had quitted that state for new prospects in Monegaw, St Clair, Missouri.  As is often the case, what had drawn the Morris’ there and when they made change of states is not known.

By 1879 Isaac had again moved his family this time to Washington Territory.  Here they appear to have first settled in King County located near Puget Sound in the western portion of the territory.

A year later, however, they were homesteading north of there in Snohomish, Snohomish County, Washington. It was there that farmer Morris would live out the remainder of his life. Due to health problems Isaac sold his farm and moved into the city of Snohomish.

Isaac Q Morris died on 7/14/12.  He was survived by his wife and four of his children. He was/is buried in the Grand Army Of The Republic Cemetery located on the outskirts of Snohomish. He was a member of Grand Army of the Republic and a Republican in his political beliefs.

Isaac Q Morris had a brother Shamgar Morris born 8/5/1842 in Guernsey Co. OH. He also served in the Civil War in the 42nd OH Infantry Co. D and also received a Civil War pension for heart and lung problems from his military service. He came to Washington Territory by 1890 and resided there till his death in 1914. He is buried at Carnation Cemetery in King Co. Washington.

After Isaac’s passing Matilda continued to live in Snohomish. She died on 5/31/1926 and was/is buried beside Isaac. Mrs. Morris was a member, along with her daughter Amanda Ludwig of the Woman’s Relief Corp. at the time of her death.