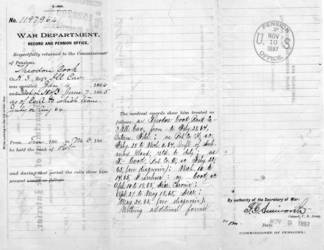 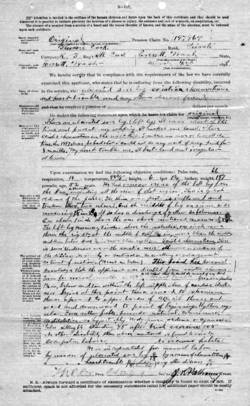 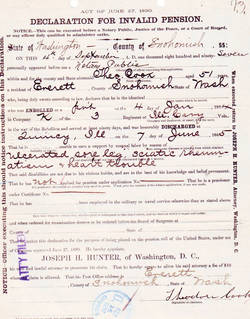 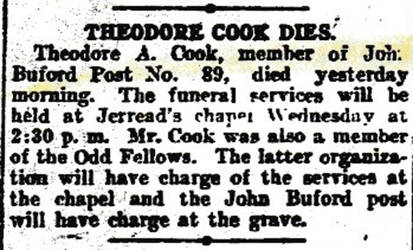 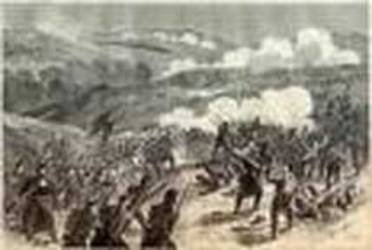 As initially formulated, this three-year 'western theater" regiment was composed of 12 one-hundred-man companies, each recruited in a localized geographic region of Illinois. Following Federal muster the 3rd remained in and around Springfield, IL.

In February, 1862 elements of the 3rd saw their first action. Shortly thereafter, on 3/6-8/1862 the entire regiment was engaged at the battle of Pea Ridge, Arkansas.

Early 1863 found the 3rd with Union Gen. Wm. T. Sherman at the ill-fated Chickasaw Bayou and Haynes' Bluff actions during Union Gen. U.S. Grant's early efforts to capture Vicksburg, MS.  Portions of the 3rd then remained with Grant's forces for the battles Port Gibson, Champion's Hill, Black River Bridge plus the siege of Vicksburg which ended on 7/4 when, after 47 days, the city fell to Union forces.  After Vicksburg came a devastating ten days of marching and fighting in Arkansas while famished for food, water and other supplies.

In 7/64 a large portion of the 3rd re-enlisted as veterans.  The regiment then took part in the repulse of Confed. Gen. Nathan B. Forrest's daring 8/24 cavalry raid on Memphis, TN before being consolidated into a six company battalion    On 9/27/64 the consolidated 3rd departed Memphis, TN, crossed the Tennessee River and confronted Confed. Gen. John Bell Hood's Confederate army. It then fell back and took part in he battles of Lawrenceburg, Spring Hill, Campbellsville and Franklin, TN. In December, the regiment was present during the battle of Nashville and was first to enter the enemy's works following the rebel left being turned.

In January, 1865, the Confederates having been driven across the Tennessee River, the 3rd encamped at Gravelly Springs, AL before, in February, moving back into Mississippi. From there, in May, with the War of the Rebellion ended, the unit travelled to St. Louis, MO and thence to St. Paul, MN where, on 7/4, it embarked on an Indian expedition over the plains of MN and the Dakota Territory, going north to the British possessions before returning to Ft. Snelling, MN. From there the 3rd traveled to Springfield, IL for final muster.

Theodore Cook was born in September, 1846 in the State of New York. His birth community was either Auburn or Aurelious. His father was James D. Cook; his mother was likely Deborah (no nee b. 1830 NY) Cook. If such was the case, Deborah appears to have been James' second wife.

The 1840 U.S. Census for Scipio Cayuga Co., NY listed the Cook residence as consisting of James, aged 20/30, his unnamed wife aged 20/30, one son, William (b. 1836) and one daughter, Mary (b.1838). Also in the household was an unidentified and unnamed male child between five and ten years of age. Likely, this was Theodore.

By 1850 James, a blacksmith by trade was living in Aurelious, Cayuga Co., NY with wife Deborah. Also in the household were children William, Mary, James (b. 1840), Charles (b. 1843 NY) and Theodore. If born in 1830, Deborah was too young to have been the mother of William, Mary and, likely, Charles, but could have been Theodore's mother. We may never know for sure.

The census for 1860 found Theodore living in Oswego, Livingston County, IL with his sister Mary, Mary's husband and their two small children. Why he was not with his father is not known.

In early 1864, the 5' 9" teenaged farm boy, Theodore Cook enlisted in the U.S. cavalry. Other vital statistics listed at the time were complexion: dark and eyes: dark.

From enlistment to final muster private Cook’s military service record  was characterized by brushes with illness, the most serious being  chronic diarrhea contracted during the late 1864 campaign against the forces of Confed. Gen. John Bell Hood. The diarrhea resulted in his being unfit for duty during most of 1865. As a consequence, with the war over, on 5/23/65 trooper Cook was declared unfit for active duty or service in the Veterans Reserve Corps, - a group composed of soldiers who, because of illness or injury, could no longer serve in the field, but still perform rear echelon duties. He was granted a medical discharge on 6/7/65.

Military records note Private Cook's address after leaving the service was to be Pontiac, IL. However, he cannot be found in the U.S. census for that town in 1870 or 1880. For that matter, from 1865 to 1884 his whereabouts are completely unknown. In the latter year he married a woman named Minnie. All that is known about Minnie is that her middle initial was A and she was born in Illinois in either late 1861 or '63.

The next brief glimpse one catches of Theodore is in 1893 when he and Minnie may have been in the Tacoma, Pierce County, and area of western Washington State. Why the two came west is not documented.

By 1897 the Cooks had moved northward from Tacoma to Everett, Snohomish County, WA. In early September of that year former trooper Cook, in applying for a U.S. Government disability pension based on his Civil War soldiering, reported that he was unable to work because of an ulcerated leg, sciatic rheumatism and heart trouble which tended to lay him up for several days at a time. The pension was granted as, at death, Theodore was receiving an $8 per month stipend.

1900. The census for Everett, WA showed Theodore and Minnie still together. By that time the former Civil War trooper was once again employed. His job at the time was listed as "sawmill foreman."

Theodore Cook died 4/5/08 in Everett, WA. He was buried in that City's Evergreen Cemetery. Minnie died in 1913 and is buried beside her husband. The couple left no children.