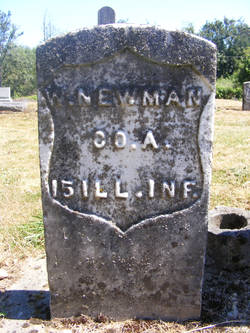 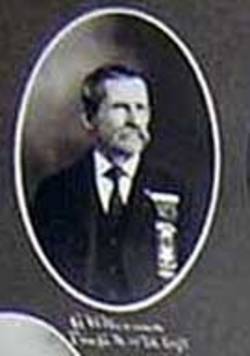 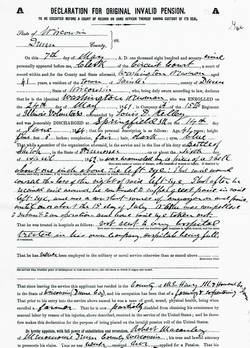 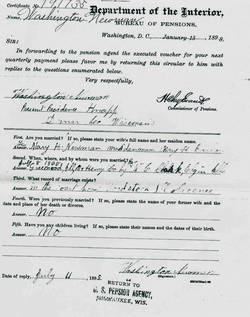 The 15th, a three year unit, was one of the first from Illinois to be sworn into Federal service.  After six weeks of training the regiment moved to Mexico, MO where, for a time, it kept company with the 21st Illinois Infantry commanded by Col. U.S. Grant before covering Union Gen. Franz Siegal’s retreat from the battle of Wilson’s Creek, AR.  Attachment to Union Gen. John C. Fremont’s army preceded quartering for the winter.

In February, 1862 the 15th traveled into Tennessee to take part in the surrender of Ft. Donelson.  It then moved to Pittsburg Landing/Shiloh where it was in the front lines of the first day’s battle and, for more than an hour, fought gallantly in an area the Rebels dubbed “The Hornet’s Nest.”  At Pittsburg Landing/Shiloh the regiment lost 250 killed and wounded.  As one source noted, There are more “known dead” of the 15th buried in the National Cemetery at Pittsburgh Landing than any other regiment and, more died later of wounds.

Summer and fall ’62 found the 15th in Mississippi.  In that state the regiment was active in many locales including the 1863 siege of Vicksburg where they lost many killed and wounded.

In the spring of 1864 the 15th joined Union Gen. W. T. Sherman’s army as it marched on Atlanta, GA.  During this period the 15th and 14th infantry units were consolidated to form the “Veteran Battalion 14th and 15th Infantry Volunteers. This unit participated in the famous “march to the sea.” and the capture of Savannah. In the early months of 1865, Sherman’s troops cut a swath northward through the Carolinas.

While doing so, new recruits brought both the 14th and 15th up to strength and each resumed its individual identity.  With the surrender of Confed. Gen. Johnston’s army to Gen. Sherman, the 15th participated in the Grand Review in Washington D.C.  It then was transferred to Ft. Leavenworth, KS where it served a short time on the plains before receiving final muster.

NOTE:  The original birth – to – death biographical profile of Washington Newman was created during the early years of the Civil War Veterans Buried In Washington State project. As a result it was limited in both size and the number of research resources available.

The biography which follows was written in May, 2019. While it contains many more details than its predecessor, it still lacks the depth of more recent additions to this website which draw heavily upon veteran-related military, pension and other documents housed in the National Archives in Washington, D.C.

As per family-supplied information George Washington Newman was born 5/8/38 in Philadelphia, Philadelphia Co., PA. The only other data available pertaining to his birth family is that both of his parents were born in Pennsylvania.

By 1861 when G.  Washington entered the U.S. Army the 5’8” farmer was residing in or near the community of Woodstock in McHenry Co. McHenry County is located in the northeast corner of Illinois, not far from the metropolis of Chicago.

During Private Newman’s military tenure one incident stands out:  On April 6, 1862 during the first day of fighting at Pittsburgh Landing/Shiloh, TN he received a severe head wound from an exploding shell.  The fragments struck him approximately one inch above the left eye and caused the loss of sight in that organ.  According to Washington, the battlefield hospitals were full, so he was treated within his company.  Amazingly the wound did not prevent him completing his enlistment.  However, by 1868, continuing pain resulted in the surgical removal of the damaged orb.

Although G. Washington and Mary produced no children of their own, they adopted a daughter, Frances E. (b. ca. 1875 WI).  The Newmans lived in at least two Illinois locations, but likely by 1875, they had resettled in Wisconsin.

In 1900 he Newmans were still in Wisconsin and Dunn Co., but by then residing in the community of Stanton. The previous year G. Washington had petitioned the U.S. Government for a disability pension based on his disabling Civil War wound. A pension was granted. At the time of his passing G. Washington was receiving a $24 per month stipend.

G.  Washington and Mary moved to Snohomish in Puget Sound area of Washington around 1903.  Although why the move was made is not documented, it was likely prompted by their now-married daughter, Mrs. Henry S. Knight and family, living in the area.

Mary Newman died 10/25/06.  Cause of death is not known. She was/is buried in the Grand Army Of The Republic (G.A.R.) Cemetery located in Snohomish, Snohomish Co., WA.

G. Washington Newman died in his Snohomish Clay’s addition home on 8/22/10. He was aged 72 years.

According to the Everett Daily Herald’s newspaper obituary , the former private’s funeral “was crowded by members of the G.A.R., W.R.C., (Women’s Relief Corps), Sons of Veterans and with friends of the deceased.” Burial was/is in the G.A.R. Cemetery beside Mary.