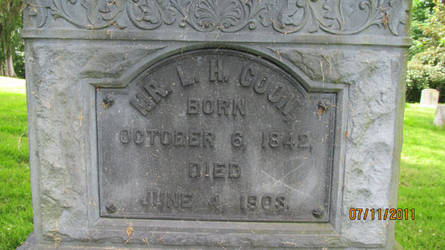 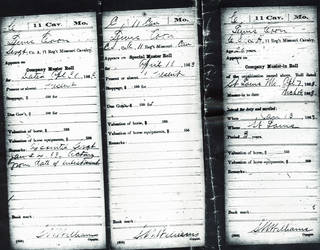 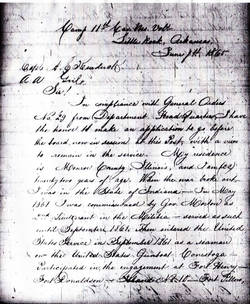 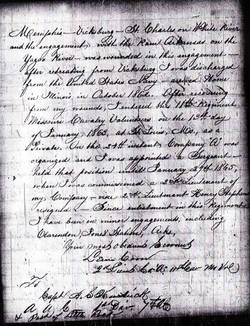 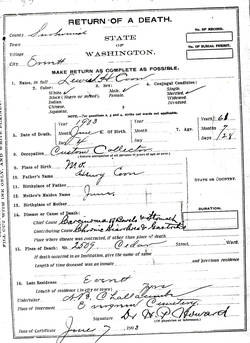 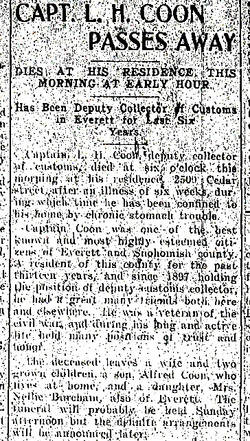 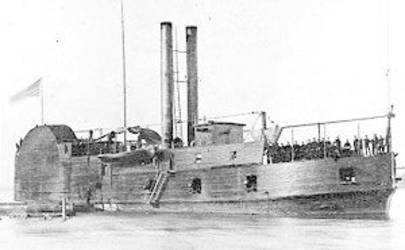 North/South Border States such as Missouri and Kansas were both figuratively and literally torn asunder during the America Civil War. This was not truer than during the early days of the conflict with both sides struggled to bring those states into their fold.

In Missouri, both the Federals and the Confederates had home guard units which attempted to thwart the opposition from taking control of the state. In the early months of the war, units such as the Putnam County Home Guards, Missouri State Militia were likely un-uniformed, bands of local residents who, armed with whatever weapons they had available, protected local bridges, railroads, etc. until either disbanded or assimilated into their respective armies. Such militia units were generally designated as infantry, but likely also encompassed mounted contingents.

The Conestoga, side-wheel towboat built in 1859 at Brownsville, PA, was acquired by the U.S. Army in June, 1861 and converted into a "timber clad" river gunboat for usage in the Western Gunboat Flotilla. Although owned by the army, the 552 ton vessel was commanded and manned by officers and seamen of the U.S. Navy.

First combat action for the Conestoga occurred in September, 1861 when she engaged the CSS Jackson near Lucas Bend, KY. Routine river patrols followed.

In February, 1862 The Conestoga participated in the Tennessee River expedition which resulted in Union Gen. U.S. Grant's capture of forts Henry and Donelson. Later that month she saw action at Columbus, KY, a Confederate strongpoint on the Mississippi River. In June she took part in the bombardment of St. Charles, AR. October saw the vessel formally transferred to the Navy.

1863 saw the Conestoga in an expedition to Palmyra, TN. The ill-fated Union expedition into Texas via Louisiana's Red River followed.

In early March, 1864 Conestoga steamed up Louisiana's Black and Ouachita rivers. Soon thereafter, on 3/8, she sank following a collision with the USS General Price.

The organization of this three year "western theater" regiment commenced in April, 1863, but was not completed until December when Co. "M" was mustered into Federal service. By that time all the previously mustered companies were already in the field: "A" and "B" in New Mexico/Arizona; "B", "C", "E" and "G" at Springfield, MO and "D", "F", "I" and "K" at Batesville, AR.

In February, 1864 the regiment, with the exception of company "H" which stayed in Arizona, was united at Batesville where it remained until April. During this period it took part in the battles of Spring Town, Waugh's Farm, Little Red River and Jacksonport. It was then ordered to Devall's Bluff, Prairie County, AR where it remained until November when was moved to Brownsville, TX.

February, 1865 saw the 11th ordered to Little Rock, AR where it remained until May. It then was transferred to New Orleans, LA with the expectation of being sent to the Rio Grande. In July, however, with the war over, it was directed to report to Benton Barracks for final muster and discharge. Upon its disbanding the 11th had marched over 10,000 miles.


Lewis B. Coon was born October the 6th in Clay County, Missouri. One source indicates his birth year was 1842 while others point to 1844. Likely the year was 1842 as U.S. census date notes a younger brother born in 1844. No specific birth date or month has been found.

Sometime in 1850 the Coons moved again, this time from Iowa to Indiana where as a youth Lewis would receive a common (public) school education which, in 1860 would lead to his entering and successfully completing law school in Ann Arbor, MI after which he passed the bar to become an attorney.

With the onset of the American Civil War in 1861, Lewis first volunteered to serve his birth state with a two month stint as a member of a local militia unit. Documentation notes that he served as a corporal, but in pension papers he hints that he rose to the rank of second lieutenant.

After leaving the Missouri home guard Lewis served his country via a one year term in the U.S. Navy.  It appears that entire period of service was aboard one ship, the U.S.S. Conestoga.

The Navy experience behind him, William returned to Missouri to serve first as acting, and later as full sergeant with the 11th MO Cavalry. Interestingly, while with the 11th, in March/April, 1864 he was reported absent for a time during which he lost his Remington pistol, saber belt and holster. While this in itself was not unusual, apparently the circumstances under which the losses occurred were because during this same period, on 4/1/64 Sgt. Lewis Coon was court marshaled for straggling, highway robbery and robbery. In terms of the first charge, he was said to have straggled and been absent all day from scouting duty. On the second, he stole $16 from a Jackson County, AR citizen and $5 CSA from a citizen while on the third he stole a breast pin from a "woman". Found guilty, Srgt. Coon was reprimanded on all three charges, but as part of the court's finding it was noted that alcohol usage was not a factor in the crimes!!

Despite personal failings, Lewis Coon was apparently a very good soldier. As a result, during the early months of 1865 he was promoted in rank and commissioned as a second lieutenant. With the promotion came a transfer from company "A" to company "F" with payment due for the lost revolver still following him. Before discharge Lewis was again promoted, this time to 1st lieutenant, but the rank was never mustered and made official.

Lewis Coon's immediate post-war whereabouts and activities are not known. He next surfaced on 1/13/67 in Monroe County, IL when he married Margaret Josephine Bradshaw (b. 2/7/50 or '5l IL). Margaret would later report having given birth to two children - Nellie (b. 1870 IL) and Alfred (b. 6/1873 or '74 MO) both of whom were living in 1900.  However, there appears to have been an earlier first child identified only as "Babe" (b. 1869) who was either born dead or died shortly after birth.

The U.S. Census for 1870 placed the Coon family on a farm in Monroe County, IL residing with Margaret's parents. In 1871/'72, however, they struck out on their own by moving to St. Francis County, Missouri where Lewis taught school. 1874 saw another move, this time to Texas where, in 1875 Lewis was elected to the office of county attorney for Busque County, a position to which he was re-elected in 1877.

In 1878 the Coons departed Texas for Abeline, KS. Lewis had served in Kansas during The War, having been "left sick" in Salinas by his regiment at one point. The family would remain in Kansas for five years during which Lewis held a commission in a state militia unit. It is from this period his later title of "Captain Coon" likely originated.

Whether or not the Coons remained in Kansas for five whole years is debatable as the census for 1880 located the family in Farmington, St. Francis County, Missouri where Leis was an attorney. Five years later, still a practicing attorney, Lewis and family were n Ft. Scott, MO.

Sometime circa 1888/'90 the Coon family departed Missouri for the more moderate climate of Snohomish, Snohomish County, WA. Why they came to the Puget Sound region of the Pacific Northwest is not known, but once here Lewis became involved in local government being first elected to the office of attorney of the City of Snohomish in 1882/'83 and, by 1895, to the state Legislature.

Around 1896 the Coons left Snohomish City and resettled west of there in Snohomish County's largest city, Everett. The following year Lewis was appointed deputy collector of customs for the Port of Everett.

Well known, well liked and involved in his community, "Captain L.H. Coon" died at home (2500 Cedar) in Everett on 6/4/03 after six weeks of constant stomach trouble. Cause of death was noted as cancer of the stomach and bowels with chronic diarrhea and gastritis contributing. Burial of the old soldier was in Everett's Evergreen Cemetery.

After Lewis's passing Margaret remained in Everett being noted in both 1910 and 1920 as having daughter Nellie and family living with her. She died at her home located at 2500 Cedar on 1/31/22 and was buried beside Lewis.

* Levi served in the 11th Missouri (Union) Volunteer Cavalry during the American Civil War. He survived the conflict.