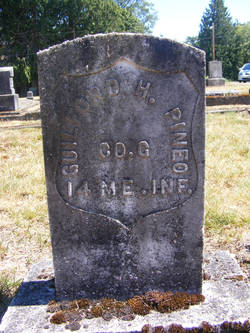 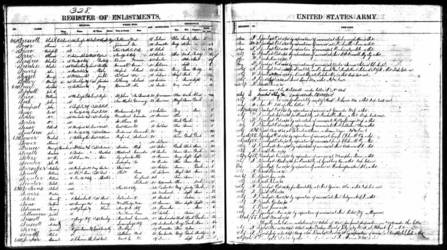 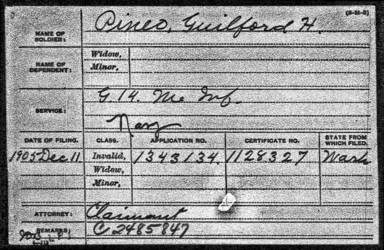 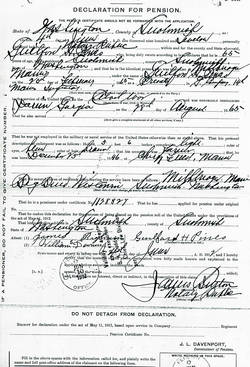 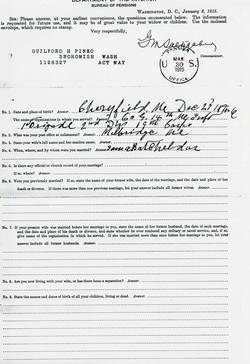 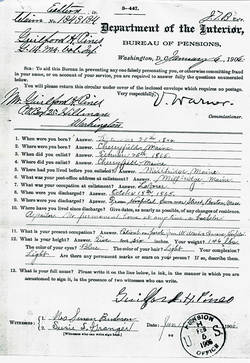 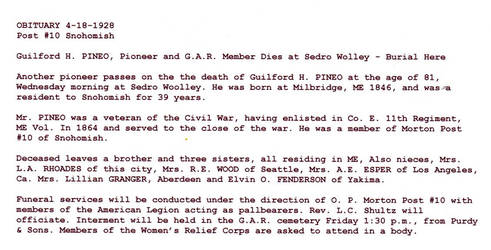 The 14th Maine left the state almost immediately following being mustered into U.S. service. Throughout its 3 year tenure it saw hard campaigning in the western theater of the south and with General Sheridan driving Confederate forces from Virginia’s Shenandoah Valley in 1864.

When the unit’s term of service expired (12/23/64) those members not having completed enlistments were organized into a battalion of four (A, B, C, D) companies.  In April, 1865 as yet unassigned one year Maine companies (13th,14th,17th,20th,22nd  & 23rd ) were attached to “the battalion” as companies E,F,G.H,I, and K. Now at full regimental strength this “new” 14th Maine performed guard and patrol duty at Savannah, Augusta, and Darien, GA until final muster.

NOTE:  The original birth – to death biographical profile of Guilford Pineo was created during the early years of the Civil War Veterans Buried In Washington State project. As a result it was limited in both size and in terms of available research resources.

The biography which follows was written in May, 2019. Although it contains many more details than its predecessor it still lacks the depth of more recent additions to this website which draw heavily upon military, pension and other veteran-related documents housed in the National Archives located in Washington, D.C.

Based on available U.S. Census data, in 1850 the Pineos were residing in Milbridge Washington Co., ME. A decade later they were still in Washington County, but at that time living in the community of Cutler. Of interest with the ten year span is that in 1850 Charles’ wife was Susan (nee Dinsmore b. 1809 ME). Family reports Susan died 4/3/1852 and is buried in Rock Maple Cemetery in Washington Co., ME. No other information is available on her death. A decade later, in 1860, the woman of the house was identified as Mary A. (nee Morrow b. 1829 Canada). Mary Pineo died 1863 and is buried in Cutler Cemetery Washington Co. ME. Although we have no documentation on the matter, there are tombstones for both mothers located in those cemeteries.

As four years of bloody American civil war ground towards a close laborer/farmer Guilford enlisted in the U.S. Army. His period of service was most likely to have been one year.  As a member of the “new” 14th he was probably not exposed to any hostile fire.

Leaving the military in the summer of 1865, former Private Pineo, following what appears to have been a stop in Boston, MA, made his way back to Maine. The “stop” referred to stems from a pension form entry which indicates he was discharged 10/18/65  “from hospital, Sumner St., Boston, MA” While there are no details regarding this hospital stay, it may have been a portent of events to come.

By 1880 Guilford was back in Maine. His community of residence was Machias located in Washington Co. There he was working on a farm.

Because most of the 1890 U.S. Census was destroyed by fire we do not know where Guilford was living at the dawn of the ‘90s. By 1900 we know, however, that the 5’6”, blue-eyed bachelor had, via Wisconsin, made his way to Steilacoom located near Tacoma in Pierce Co., WA. There he was a patient in the Western Washington home for the insane.

In 1906, Guilford claimed that as a “sailor” since leaving the army he had “no permanent home at any time.” Furthermore, his occupation was noted as “patient on parole from Western Washington insane hospital.”

As of 1910 Guilford was out of the hospital and working as a farmer laborer in Cathcart Snohomish Co., WA. Likely Thomas and Hanna Evans with whom he was boarding owned the farm.

No census information can be found for Guilford in 1920. Perhaps he was a patient in Northern State Hospital for the insane as it appears that is where he died.

Guilford H. Pineo never married. Also, it appears he never fathered any children. The 82.3 year old died in Sedro Wooley Skagit Co., WA on 4/18/28. Burial was not in that community but in the Grand Army Of The Republic (G.A.R.) Cemetery located south of there in Snohomish, Snohomish Co., WA

Somewhere during his post- Civil War life’s journey Guilford had applied for a U.S. Government disability pension based on ailments or illnesses which traced back to his days of Civil War soldiering.  Although no details are available, at some point he had been granted a pension because, after his death, Linnie A. Rhodes, his “guardian”, petitioned the U.S. Government for an additional $390 of his $65 per month stipend. It is not known if payment was granted.