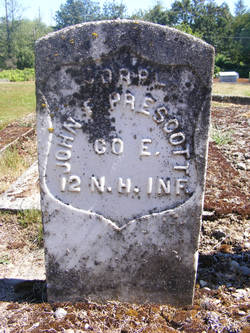 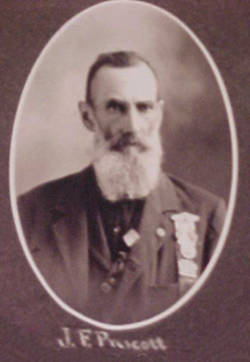 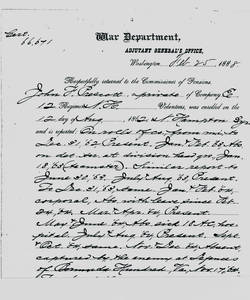 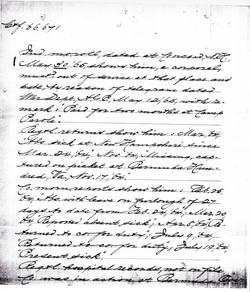 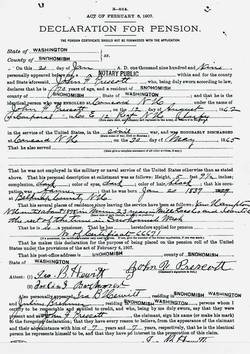 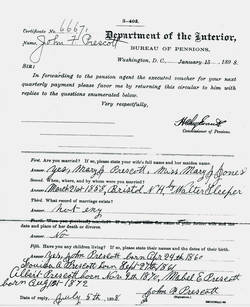 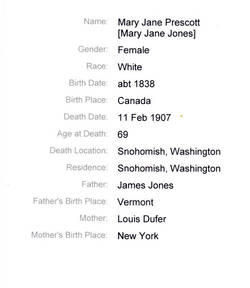 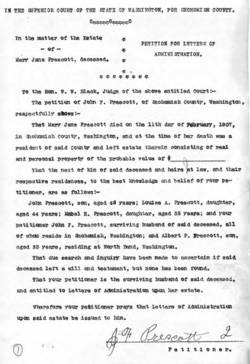 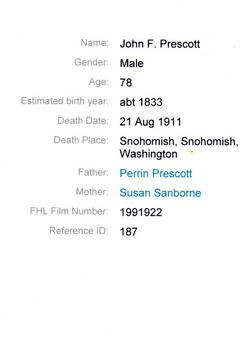 "The New Hampshire Mountaineers." sprang into existence in about three days. It served three months short of three years in the armies of The Potomac and The James. On 5/2/63 at Chancellorsville, VA the regiment, being the lat of the Third Corps to retreat, left nearly all its officers and more than half its men dead or wounded on the field.

On 11/17/64 during the battle of Bermuda Hundred, VA the unit’s casualties were 10 wounded and 120 captured/missing. With the loss of more than one third of its members either killed or wounded the history of the 12th was one of valor and sacrifice unsurpassed, if equaled, by any other infantry regiment in the Union Army.

During the summer of 1862 John left his parents’ farm and enlisted in the U.S. Army. His unit was Company “E” of the 12th New Hampshire Infantry. Company muster rolls for 1862 show Private Prescott as “present” through the end of that year. In early 1863 he was listed as “absent” because of detached service as a divisional headquarters teamster. Back with his unit at mid-year, he was reportedly present through the remainder of ’63.Private Prescott was captured by Rebel forces on 11/17/64 during the battle of Bermuda Hundred, VA. Subsequently paroled he ended The War with the rank of corporal.

After serving in the military John returned to laboring on his parents’ farm. He and his family appear to have remained there until sometime during the 1870s when they removed from New Hampshire to Minnesota. Exactly when and why the move was made is not known.

The U.S. Census of 1880 found John, Mary, Louisa, Albert and Mabel farming in Princeton Mills Lacs Co., Minnesota. Also in the home was John’s now-widower father and one Walter Annis. Mr. Annis, a farmer, was noted as being the Prescott’s 19 year old son in law.

Where the Prescott clan was residing in 1890 is not known as most of the U.S. Census for that year was destroyed by fire. Likely, however they were still in Minnesota as that was where the population tally of 1900 found them.  By this time, though, they had a new community address as they were residing in or near Wyanett located in Isanti County. Under the Prescott roof at that time were son Albert along with daughter Mabel and her two young children. Leslie Bockoven, identified as a servant was also in the home.

On some unidentified date between the census of 1900 and February 11, 1907 John and Mary moved from Minnesota to the Puget Sound region of western Washington State and settled near the community of Snohomish located in Snohomish County. As with when they came, why they came west is not documented.  We know the couple was in Snohomish as of 2/11/07 as that was when and where Mary died. She was/in buried in the Snohomish G.A.R. Cemetery.

According to the 1910 U.S. Census for Snohomish, Washington.  Widower John F. Prescott was still the head of his household. As far as a means of support, the listing was “own income.”
Also in the household at that time was daughter Mabel Dibblee – then identified as a widow - and her now three young children. Her brother, Albert – a dry goods merchant – was the sixth person under John Prescott’s roof.

*NOTE:  The original biographical profile on John Francis Prescott was created early in the history of the Civil War Vets WA State project. As such, available information pertaining to his life was very limited.  With access to new family data via the internet his biographical profile was rewritten in February, 2018.