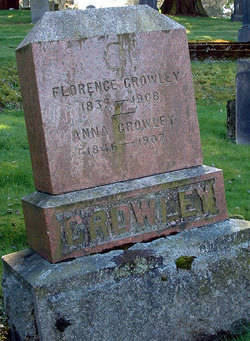 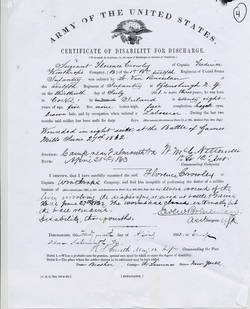 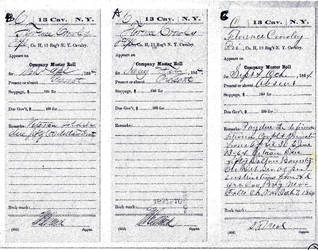 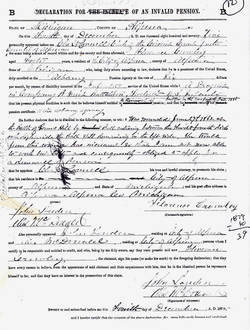 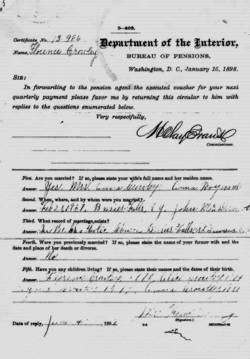 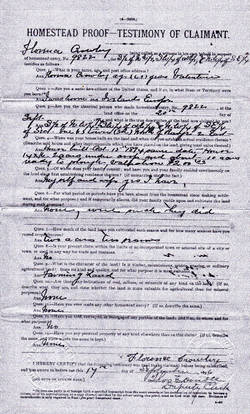 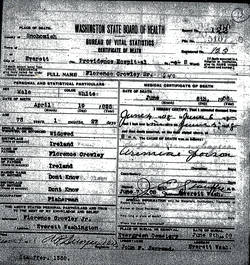 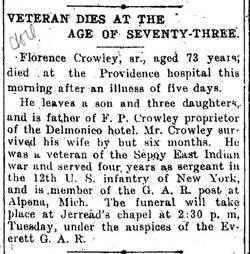 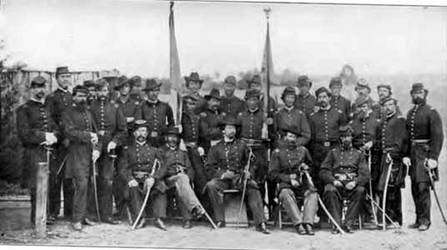 In April, 1861, at the beginning of the American Civil War, the United States claimed only ten regiments encompassing 16,000 regular or "professional" soldiers. These were scattered across the entire North American continent.

After the Rebel firing upon Ft. Sumter in Charleston Harbor, SC President Abraham Lincoln called upon patriotic Americans to join volunteer military regiments, and, by his proclamation of 5/3/61 authorized the raising of nine additional regular army infantry regiments.

Each of the new regular regiments was to be composed of thee, eight-company (100 men per company) battalions, but in the face of patriotic fervor to enlist in volunteer state regiments, it was found impossible to locate sufficient manpower to fill more than two weak battalions per Regular regiment.  Such was the situation with the new 12th U.S. Regular Infantry.

The combat history of the 12th during the war years reads like a "who's who" of battles within the eastern theater. Its actions began in March, 1862, with Union Gen. George McClellan's Army of The Potomac moving onto the Virginia Peninsula campaign. They ended 10/27 and 10/28/64 at the Boydton Plank Road and at Hatcher's Run during the Union siege of Petersburg, VA. After this the unit was moved to New York where it remained until 7/65. So ended the Civil War service of the 12th U.S. Regular Infantry.

The 13th New York Cavalry, also known as the Seymour Light Cavalry, was formed in June, 1863 by the consolidation of several incomplete organizations, viz: the Davies light cavalry, the Horatio Seymour cavalry, the Tompkins cavalry, the New York brigade, and the Seymour light artillery. A three year, "eastern theater" unit. The first six companies left the state on 6/23/63 with cos. "G" and "H" following on 8/14. The remaining companies followed that next winter.

First regiment (six companies) saw first service during the Pennsylvania Campaign of June and July, 1863. During this period it distinguished itself by the destruction of the enemy's pontoon bridges and train at Falling Waters, MD.

After departing Pennsylvania the 13th served the remainder of its term of service in and around the defenses of Washington, D.C. Even there, however, it was not free from danger as it saw its heaviest losses during this period losing 24 killed, wounded and missing at Aldie, VA and at Piedmont, VA on 6/5- 6/6/64 when it lost an additional 20 killed, wounded and missing.

In July, 1865, with the war over, the 13th was consolidated with the 16th New York Cavalry. The resulting organization was known as the 3rd Provisional Regiment, New York Volunteer Cavalry.

By special orders from the U.S. War Department dated 6/23/65 the 13th and 16th regiments of New York cavalry were merged. The merger was consummated on 8/17/65.  The newly consolidated force was designated the 3rd Provisional Regiment of New York Volunteer Cavalry.

With the War over, the 3rd existed only until 9/21/65 when it was mustered out of service. Regimental losses: 4 enlisted men by death or other causes.

Florence Crowley was born 4/19/35 in County Cork, Ireland to parents Florence (b. ca. 1805 IR) and Mary (nee McCarthy b. 1810 IR) Crowley. Although it does not show up in any available documents, likely his middle initial was P. because, in later years when beginning a family of his own, he named his first son Florence P. and referred to him as "Junior." According to the 1900 U.S. Census, the Crowleys immigrated to America in 1836, apparently settling in Brasher, St. Lawrence County, New York.

While information on Florence's childhood, formative and teenaged years are not available, it appears that as a young adult of approximately 22 years of age he traveled back to his country of origin, or at least to Great Britain to join the British Army and fight in the 1857 Sepoy War/Rebellion in India. This war, or uprising, was the result of a period of armed insurgency which attempted to stem the power and control of the British East India Company. To some, it is considered the First War of Indian Independence. While the conflict which lasted from early 1857 to mid 1858, did bring an end of both the East India Company's rule and  the Mughal Empire, it ushered in a period of direct British Government rule (British Raj) which dominated much of the Indian subcontinent for the next 90 years.

The Sepoy War behind him, Florence appears to have returned to Brasher, NY where he worked as a laborer until the outbreak of the War of the Rebellion in April, 1861. Shortly thereafter, on 7/30 the 5"9", blue/hazel eyes, brown haired, ruddy complexioned Crowley enlisted in the regular U.S. Army. Likely his enlistment in the regulars vs. a volunteer unit was based on his prior military experience which resulted in his enlistment as a sergeant rather than a lower rank.

On 6/27/62 during Union Gen. George B. McClellan's Peninsula Campaign into Virginia, during battle of Gaines Mill sergeant Crowley received a musket wound to his right side. According surviving medical records, the rifled ball entered his body between the third and fourth ribs causing a "severe wound to the liver involving the diaphragm." As an indication of the severity of the wound, initial reports were that Sgt. Crowley had been killed in action. However, although the wound would heal, the lead slug was never removed from his left side where it had come to rest.

As a result of his wounding Sgt. Crowley was hospitalized for months, and remained absent from duty until January, 1863. Even upon his return to his regiment, by 4/23/63 he was considered to be three fourths disabled by his wound and therefore unable to perform the duties of a soldier. As such, he was granted a medical discharge.

After exiting the regulars, two events of significance occurred in Florence's life. Firstly, he immediately applied for a U.S. Government disability pension (which would be granted) and, secondly, in July, 1863 he re-enlisted in the U.S. Army, this time joining the cavalry arm of the service. Indications are that receipt of an enlistment bonus or "bounty" was at least partially responsible for this supposedly "unfit" soldier to return to duty as a volunteer.

Having enlisted on this occasion as a private, on 9/20 Florence was promoted to the rank of corporal. He would maintain that rank until 6/13/64 when, for no other documented reason than "incompetence," he was reduced in rank to private. On 3/31/65, however, he was again elevated to corporal, a rank which he held until final muster and discharge

With his second war and third enlistment behind him Florence Crowley apparently again returned to Brasher, NY where, on 2/23/67 married Anna "Annie" Raymond/Roymond. Documents differ on Anna's year and place of birth. One source notes her being born in 1846 in New York, while a second lists the year as 1848 and a third denoting August,1848 outside of the country and coming the U.S. in 1866. Birth data aside, the union of Florence and Anna produced as many as eight children, five of which are mentioned in pension documents and four of whom survived into adulthood :Florence P., Jr. (b. 4/70, MI), Alice (b. 1874), Unnamed infant (b. 1877), Agnes (b. 7/79) and Anna (b. ca. 7/80).

As evidenced by the birthplace of their first child, at some point shortly following their marriage Florence and Anna removed from New York to Alpena, Michigan where the 1870 found Florence employed in a sawmill.

As indicated earlier, immediately following his medical discharge from the 12th US regular infantry because of his wounding at the battle of Gaines Mill, VA, Florence requested a U.S. Government disability pension which was granted. In 1879, at the age of 40, Florence requested an increase in his $6 per month stipend because recurring trouble from the old war wound had significantly decreased the amount of manual labor he was able to sustain. Likely the monthly payment was increased.

On 9/20/94 Florence and Anna drew upon his Civil War service to file for a 150/160 acre homestead with the Grayling Michigan land office. By 10/15 of that same year a 14' x 16' house had been constructed on the property and two acres had been cleared. While one notation is that over the next two years Florence cultivated and planted two acres of crops, 1894 information indicates ten acres were "ready for the plow.' Florence's stint as a farmer didn't last long, however, as the 1900 census listed his occupation as "dock man."

Sometime between 1900 and 1907 Florence and Annie moved from Michigan to the Puget Sound region of Washington State. Likely the move was prompted by the presence of at least one of their children, son Florence, Jr., residing in the Everett area of Snohomish County where he was proprietor of the Del Monico Hotel. It is not known if, once in Everett Florence and Anna lived with or just near their son.

Anna "Annie" Crowley, wife of Florence Crowley died in December of 1907 in Everett, WA. The cause of her passing is not known. She was buried 12/22/07 in Everett's Evergreen Cemetery.

Florence Crowley, Sr. died 6/6/08 at Providence Hospital in Everett. At death he was 73.1 years of age. His occupation was listed as "fisherman." As his obituary noted, he had survived his wife's passing "by but six months."Cause of death following a brief, five day illness was listed as uremia poisoning. Perhaps his old Civil War liver wound and the lead ball still in his body, finally caught up with him. Florence was buried 6/9/08 next to Anna at Evergreen Cemetery.