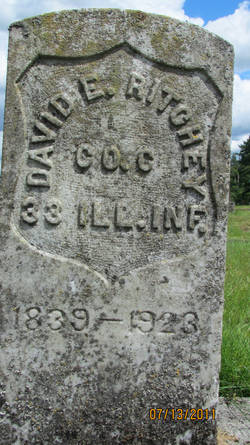 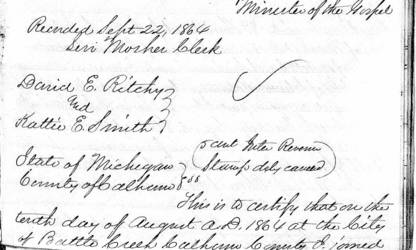 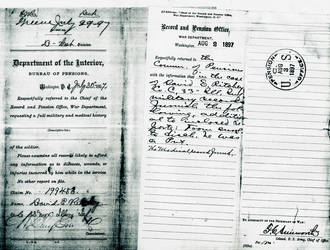 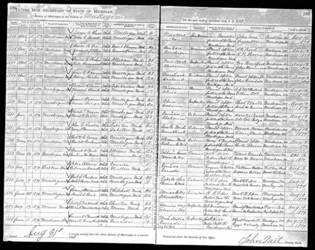 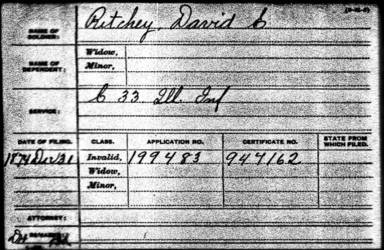 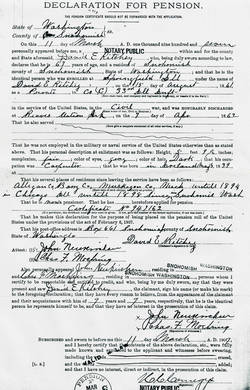 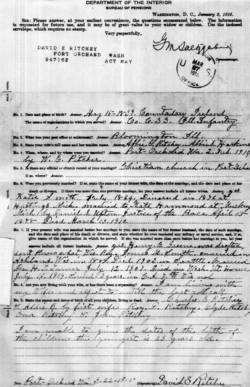 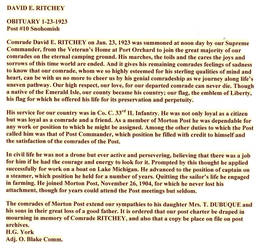 The 33rd Illinois, a “3 year” regiment was sometimes known as the “The Normal Regiment” because many of its initial recruits were students in the Normal School in Bloomington, IL.  They spent 1861/62 in Missouri fighting bushwhackers and guarding railroads.

In 1863 they joined Gen. U.S. Grant’s Vicksburg campaign and suffered greatly during the failed 5/22 assault on the city. Later the same year they took part in Gen. Banks’ Texas campaign.  In early 1865 the unit was called to join forces moving on Mobile, Al.  En-route their train hit a cow and derailed killing more men than the 33rd lost in any combat situation.

NOTE: The original birth – to – death biographical profile on David Ritchey was created during the early years of the Civil War Veterans Buried In Washington State project. As a result it was limited in both size and the availability of research resources.

The biography which follows was written in May, 2019. Although it contains many more details than its predecessor, it still lacks the dept of more recent additions to this website which draw heavily upon veteran-related military, pension and other documents housed in the National Archives in Washington, D.C.

The same year he was born David’s parents brought him to American. In the U.S. the family first settled in Caledonia Livingston Co., NY. The 1850 U.S. Census for that locale noted John Ritchie’s occupation as being “laborer.”

By 1860 Sarah and her children were residing in Watson Allegan Co., MI. It appears likely that at that time David was considered to be the male head of the family.

In August, 1861 David, a 5’ 9 1/2” carpenter then residing in Illinois, responded to the call to defend the Union. His military career was to be brief. Almost immediately after entering the service he contracted a serious case of typhoid fever which debilitated him to the point where, in the spring of ’62, he was granted a disability discharge.

After leaving the service David resided in Michigan where he obtained employment on a Great Lakes ship. He ultimately rose to the position of steamer captain.

In 1894 the Ritchey family moved to Chicago, Ill. Two years later, in 1896, they moved to Snohomish, Snohomish Co. WA. In 1900, in Snohomish, David listed his occupation as “ship’s carpenter.”

The second Kate Ritchey died in Snohomish on 3/13/10. No details are available pertaining to her passing. She was/is buried in the Snohomish Grand Army Of The Republic (G.A.R.) Cemetery.

On 2/14/14, then residing in Port Orchard Kitsap Co., WA, David married for a final time. The third Mrs. Ritchey was the twice wed Abbie R. Haskins (b. 1848 MA). The couple produced no children.

In 1920 David and Abbie were residing in Annapolis Kitsap Co., WA. Under their roof at the time was David’s son Clinton H. Ritchey and Ben McMillan a grandson.

According to family members, Abbie died in 1922. Her final resting place is not known.

David died on 1/28/23 while a resident of the Washington Veteran’s Home in Retsil Kitsap Co., WA.  At the time of his death the 83.9 year old Union army veteran was receiving a $50 per month U.S. Government disability pension stipend based on ailments or ills which traced back to his days of Civil War soldiering. Burial was/is beside the second Mrs. Ritchey in the G.A.R. Cemetery in Snohomish, WA.

[1} In Ireland the family surname was Ritchie. On an unknown date after coming to America David’s surname became Ritchey. Not all of the family members made the change, so David’s parents and some of own his sons are buried with the last name Ritchie.