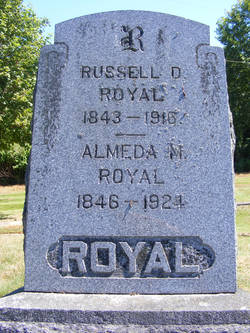 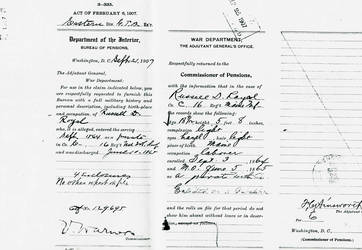 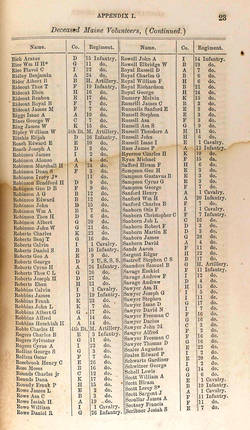 Russell Royal Soldiers of ME 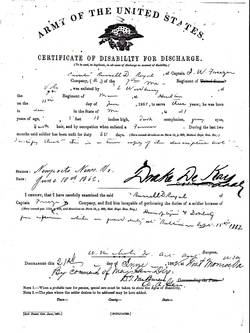 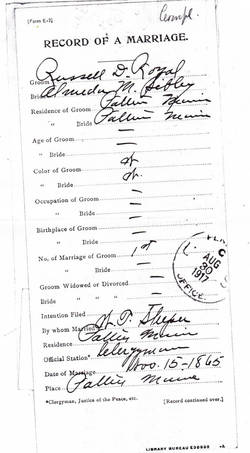 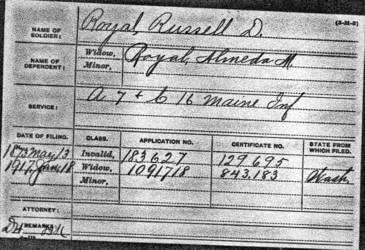 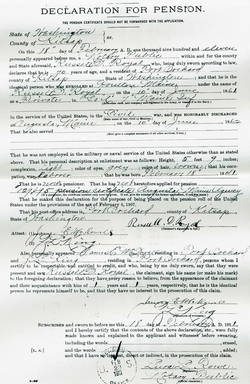 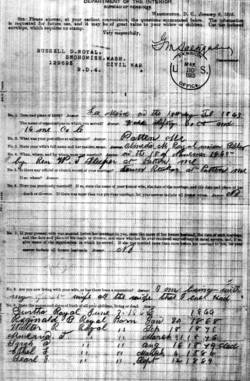 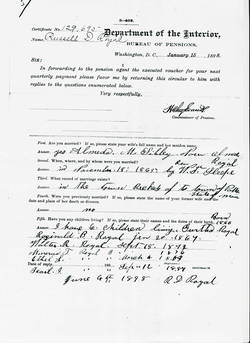 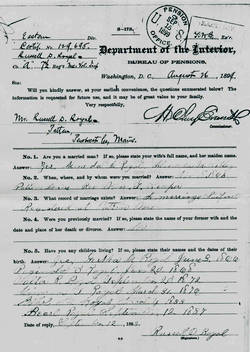 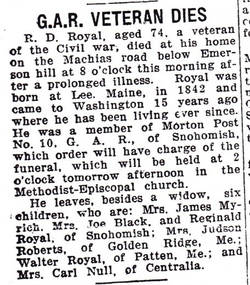 This three-year unit left the state for Baltimore, MD on 8/23/61, only two days following Federal muster.  It remained there until 10/25 when it moved into Virginia-via Washington D.C. for the winter. During these early months sickness and death were so prevalent in the ranks that one co. (F) was disbanded and a new one was sought to replace it.

In the spring of ’62 the 7th joined Union Gen. George McClellan’s Peninsula Campaign.  It was under fire on many occasions and was noted for its glory and gallantry.  That autumn the unit participated in the Maryland Campaign battles of South Mountain and Antietam.  In the latter conflict it lost 11 officers and 108 men out of 15 officers and 166 enlisted men present.  This left the regiment so reduced in numbers it was sent home to Maine to recruit.

Returning the Army of the Potomac in the spring of 1863 the 7th saw action at Cemetery and Marye’s Heights near Fredricksburg, VA and at Chancellorsville, VA.  During the subsequent Pennsylvania Campaign it took part in actions at Rappahanock Station, Locust Grove, Mine Run and numerous skirmishes.

In May, 1864 the regiment was with Union Gen. Grant at The Wilderness, Spottsylvania, and Cold Harbor.  However, on 7/11 it was returned to Washington to defend against rebels approaching The Capitol.  It then moved to near Charlestown, VA before returning to Maine for final muster.

The 16th, a three year regiment, left Maine for Washington D.C. on 8/19/62.  In early September it moved into Virginia and began a two-month period of terrible suffering because they were campaigning without sufficient clothing and camp equipage.  As a result, by mid October the unit has dwindled from approximately 950 to less then 700 men and, of these, 250 were at one time on the sick list.  Finally, in late October they drew shoes and shelter tents, which improved not only regimental health, but morale.

The regiment’s first serious battle was Fredricksburg, VA.  The 16th lost 226 killed, wounded or missing out of 450 men engaged.  It next lost heavily at Gettysburg, PA where, at the close of the terrible three days, all that remained of 248 officers and men were 2 officers and 5 enlisted soldiers.  Although not necessarily in chronological order, other engagements in which the 16th bore an “honorable” role were Chancellorsville, Mine Run, Wilderness, Spottsylvania, Laurel Hill, North Anna River, Totopotomy, Bethesda Church, Petersburg, Weldon Railroad, Hatcher’s Run and the pursuit of Confederate General  Robert E. Lee to Appomattox.

NOTE: The original birth – to – death biographical profile on Russell Royal was created during the early years of the Civil War Veterans Buried In Washington State project. As a result it was limited in both size and the availability of research resources.

The biography which follows was written in May, 2019. Although it is much more detailed than its predecessor it still lacks the depth of more recent additions to this website which draw heavily upon veteran-related military, pension and other documents housed in the National Archives in Washington, D.C.

Russell D. Royal was born 2/18/43 in Lee, Maine. His parents were Charles Romanzo (b. 1800 ME) and Lydia (nee Williamson b. 1817 ME) Royal. No occupational information has been found for Charles.

Based on available U.S. Census data Russell was the second of three Royal children. Older than he was a brother named Wellington (b. 1826 ME). Younger was as Sister Eliza A. (b. 1848 ME).

In 1850 the Royals were residing north of the community of Bingham, Maine. Bingham is located in Penobscot Co.

In 1861, during the first months of The War of The Rebellion, the 5’10”, darkly complexioned teenage farmer joined the U.S. infantry.  His initial military career was to be short lived.  Although available documents are not legible, something occurred to Private Royal in September while on guard duty in Baltimore, MD. Whatever occurred, by mid ’62 had rendered him unfit for military duty and promoted his discharge from the army.

In September 1864 Russell, now a 21-year-old laborer, had sufficiently recovered to return to the U.S. Army as a “substitute recruit.”  Most likely he was being paid to take the place of another individual who had been drafted, but could afford to hire a replacement.  In any case, while Private Royal’s first military experience had been at the beginning of his unit’s period of existence, his second encompassed his regiment’s waning months.

A few short months after returning home to Patten, ME Russell married Almeda Mead Sibley (b. 1847 Aroostook Co., ME). She, too, lived in Patten.

Post War, Russell took up farming as his occupation. From 1870 through 1900 the family farm was located in Crystal/Crystal Plantation Aroostook Co., ME.

When and why the aging Civil War vet and his wife came to the Puget Sound area is not clear. Perhaps it was to be near children who were already living in the area.  Whatever the motivation, the Royals appear to have moved here in 1901.

By 1910 Russell was living in one of the Washington’s old soldiers’ home located in Retsil Kitsap Co., WA. There is no mention of Almeda.

At some point after the War Russell had applied for and been granted a U.S. Government disability pension based on ailments or other debilitating conditions which traced back to his days of Civil War soldiering. At the time of his death the 73.10 year old former Union Army private was receiving a stipend of $24 per month.

After Russell’s death Almeda appears to have remained in Snohomish Co. Although she cannot be located in the 1920 census, at the time of her death on 11/26/24 she was residing – likely with one of her adult children – in Arlington, WA and receiving $30 per month of late husband’s pension. Burial was/is in the Snohomish G.A.R. Cemetery beside Russell.