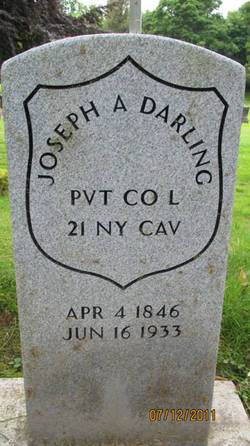 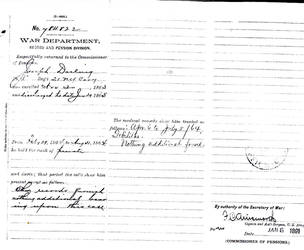 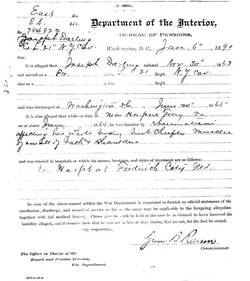 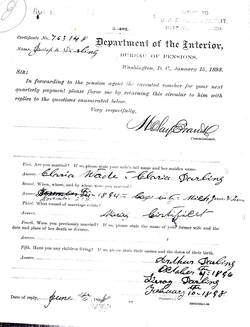 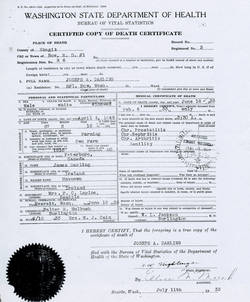 Recruited from the SE New York State counties of Renneslaer, Albany, Troy and Monroe, the 21st, an eastern theater unit also known as the Griswold Light Cavalry, was to spend most of its existence serving in Virginia and West Virginia.  Initial musterees left the state by detachments to serve in the Department of Washington, but in1/64 the regiment was assigned to the Army of West Virginia.

It next was stationed at Remount Camp, MD until 11/64.  Throughout this period the 21st was continually employed in the arduous duties devolving on the cavalry arm of the service.  In 1865 the regiment saw its last combat near Berryville, VA.  As the War wound to a close a large portion of the 21st exited the service as they had entered it i.e., by detachments.

On 9/9/65 the remaining troops were consolidated into a 7 company battalion which, in turn, was mustered out by detachments the following year.  Heaviest combat losses were sustained by the regiment at Lynchburg, Buckton, Purcellville, Snicker’s Gap, Ashby’s Gap, Winchester, Cedarville and White Post, all of which are in VA.

Joseph Darling was born 4/5/43 in the County of Peterboro, Township of Dummer, Canada.  All that is known about his birth family is that his father, James, and his mother had been born in Ireland.  There is no available information pertaining to his childhood, formative or teenaged years.  At some point the Darling family moved from Canada to New York State and took up farming.

It was while working on his fathers farm the 5’4”, blue eyed Joseph enlisted in the U.S. cavalry.  At least partial incentive for the enlistment was receipt of a signing bonus or “bounty”.  Despite the combative nature of his regiment it appears illness was to prove the most significant hazard for private Darling as in later years he would request and receive a U.S. Government invalid pension based upon, around 6/64 having contracted rheumatism which affected his whole body, but especially the muscles of his back and shoulder.

At death the former trooper was receiving the regal sum of $100 per month.  Joseph’s whereabouts and activities are undocumented for almost 30 years following the end of the war.  Likely, however, he was employed in either farming or lumbering.  On 11/27/94, in City, MI Joseph married Claria Wade.  The union produced two children: Arthur (b. 10/4/96) and Leroy (b. 2/10/98).

By 1900 Joseph had moved to the Pacific Northwest.  Why the move was made is not known.  If it was employment related, such was not long-lived as from 1910 on; he needed regular assistance and aid because of a double rupture and old age.  Also, available documents do not indicate if his wife and children accompanied him on the move west.

In 1927 83 year old Joseph was in Spokane County.  However, when the Civil War veteran died on 6/13/33 he was residing in the Puget Sound area community of Bow, WA.  While the death certificate noted several Latin words for the cause of his passing, it is appropriate to say that Joseph Darling died of old age.  Although the death certificate noted his birth year as 1846 which would have made him 87.2 passing, going by the birth year provided by the veteran, he was 90.2 when he died.  Finally, the same document also noted that Joseph was a widower.  As such when and where his wife died is not known.