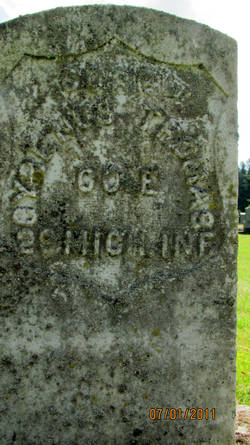 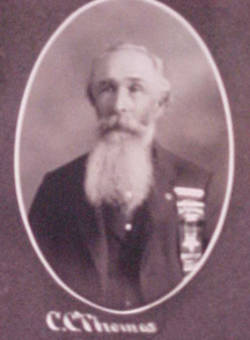 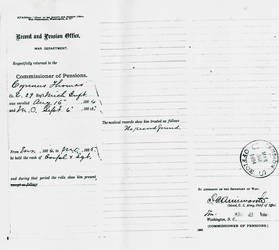 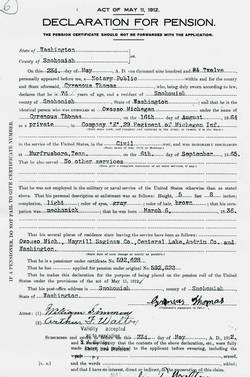 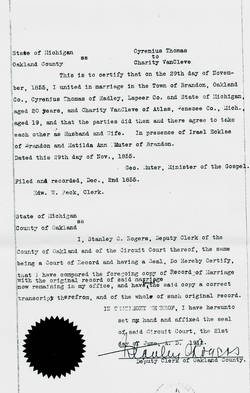 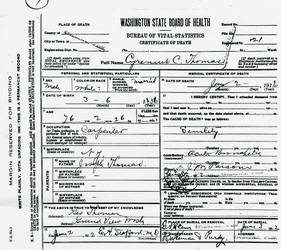 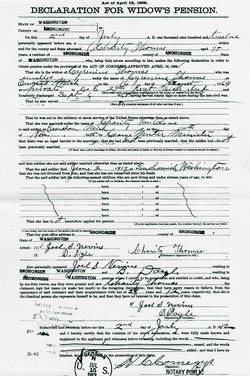 Recruited from Michigan’s 6th Congressional District, this three-year “western theater” unit left the state 860 strong almost immediately following federal muster and proceeded to Nashville, TN, arriving as Confed. Gen. Hood’s troops were advancing on the city. At Nashville, however, the 29th was not under fire. That would come later in October at Decatur, AL.

Once again, the regiment moved into the rifle pits just in time to repel attacking rebels who outnumbered the Union defenders three to one. In this action the unit entered the frey under “a galling fire with the coolness of veterans.” The regiment was to encounter the rebels on several more occasions while on post and escort duties at Decatur. Completing the 29th’s combat history were actions at Overall Creek, TN (12/7/64), Winsted Church, TN (12/13/64), Shelbyville Pike, TN (12/15&16/64), and Nolansville, TN (12/17/64).

Cyrenus C. Thomas was born 3/6/36 in New York State.  In or near which town and county is not documented.

Parents of Cyrenus were Joseph (b. 1785 MA) and Annice Candice (nee Roberts b. 1794 VT) Thomas. Based on available documentation, it appears that Cyrenus was an only child. . Beyond the fact that during the U.S. Census of 1850 the Thomas family was residing in Newstead, Erie County, NY, no information is available on his formative or teenage years

On 11/29/55 twenty year old Cyrenus, then residing in Hadley, Lapeer County,  MI married nineteen year old Charity Van Cleve VanCleve (b. 12/1836 NY).  Charity was a resident of Atlas, MI.  The ceremony was performed in Brandon, MI. It was in Hadley the young couple set up their first household.

In the midst of siring children, Cyrenus left his family and went off to help fight in America’s bloody Civil War. His enlistment date was 8/16/64. His unit of choice was the 29th Michigan Infantry Company “E”.  Most likely he received a handsome three figure enlistment bonus or “bounty”, a portion of which was paid up front with the balance to come in later increments.

Details are sketchy on the 5’8” “mechanic’s” military tenure.  One notation indicates he rose from the rank of private to corporal then sergeant.  There are no documented incidents of wounding or illness.  Still, in his later years Henry would apply for a be granted a U.S. Government disability pension stipend based on physical ailments, etc. that he traced back to his days of Civil War soldiering.

Following the War Cyrenus returned to his home and family. The census tally of 1870 found the four in Owosso, MI. In 1860, Cyrenus’ occupation had been “farm laborer. As noted above, when he entered the service he claimed he was a “mechanic.” At the dawn of the ‘70s, however, he was listed as working in a wagon shop. .A decade later he would be a “carpenter.”

The Thomas family resided in one additional Michigan location, Brady, located in Saginaw Co., before heading west to Washington Territory/State.  .  Likely the Washington move was made later in life to be near the families of adult children living in the area. All we know for sure is that by 1900 Cyrenus and Charity were in Snohomish, Snohomish County, Washington.

Whatever the move date, in 1910 and on 5/23/12 when Cyrenus applied for what appears to have been an increase in his pension benefits he was still residing in Snohomish.  Shortly thereafter, on 6/12/12 the 76.2-year old Union veteran died.  Cause of death: Senility.  Contributing: Severe bronchitis. At passing, carpenter Cyrenus was receiving a $20 monthly pension payment.  Burial was/is in the Snohomish Grand Army Of The Republic Cemetery.

After the death of Cyrenius, Charity remained in Snohomish.  In 1920, at 83 years of age, she was sharing her Snohomish home with 67 year old Leroy Johnson the widower husband of one of her daughters. Shortly thereafter she was living with her other daughter and son-in-law in Machias, Snohomish County, WA.

Charity died on 7/26/22.  At the time of her death her late husband’s Civil War pension payment had risen to $30 per month. She was/is buried in the Snohomish G.A.R. cemetery beside Cyrenus.

[The original birth/biographical sketch of Cyrenus Thomas was created in the early years of the Civil War Veterans Buried in Washington State project. It was very limited in size and scope. The preceding profile was rewritten in March, 2018 utilizing enhanced family background date obtained from internet sources. However improved, it still suffers from a lack of detailed documentation from the National Archives. ]