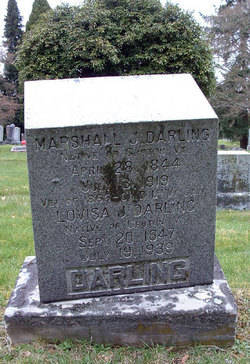 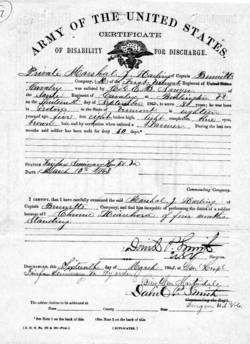 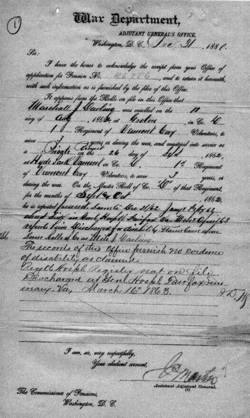 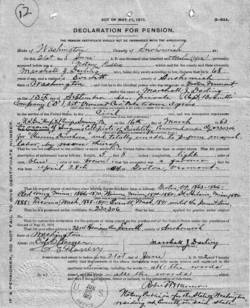 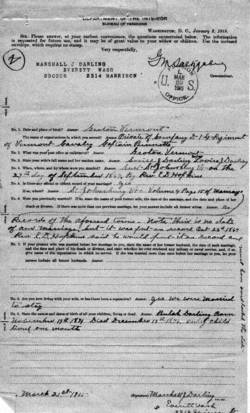 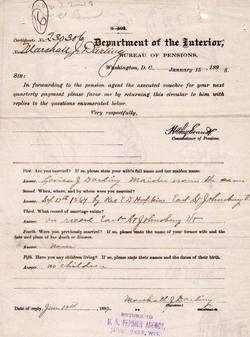 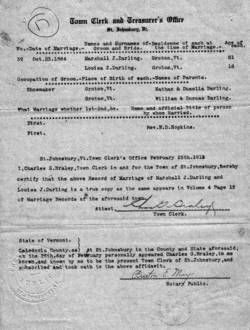 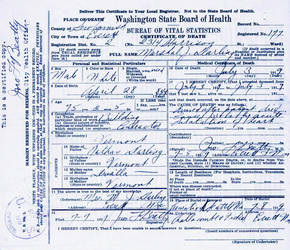 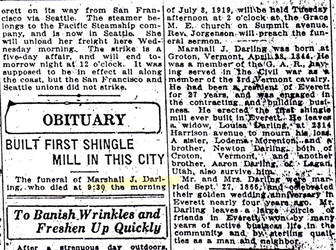 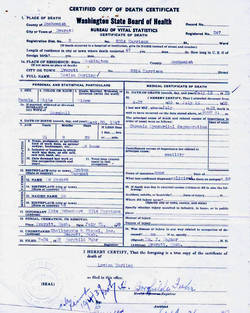 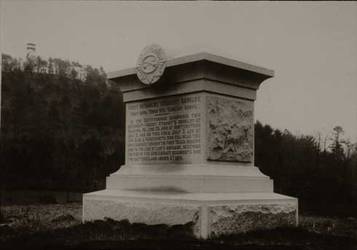 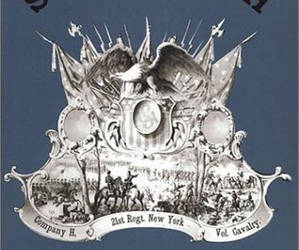 The 1st, a three year "eastern theater" regiment left Vermont in mid December, 1861 travelling to Washington, D.C. in a five section train composed of 153 rail cars. Thus began an odyssey that by wars end encompassed seventy five battles and skirmishes. Combat action began for the 1st on 4/16/62 in Virginia's Shenandoah Valley and culminated during a 4/9/65 sabers- drawn charge upon the Confederate Army of Northern Virginia's supply train at Appomattox Ct. House, VA. That last act of battle fury was halted only when word was received that Confed. Gen. R. E. Lee had requested a truce so he could surrender his army. During three years of campaigning throughout Virginia as well as in Pennsylvania and Maryland the regiment captured in "open field" three battle flags, thirty seven artillery pieces, and more prisoners than the unit had men---a record which, it is believed, was not excelled by any other regiment in Federal service.

In May, 1865 the 1st returned to Washington, D.C., this time to participate in the Grand Review of Union forces. From there, with veterans mustered out, the regiment was consolidated into six companies which were subsequently stationed at St. Albans, VT and at various points in northern New York State until final muster.

In the summer of 1862 the 5'8", light complexioned, blue eyed, brown haired Marshall left Groton for the first time in his life to enter the U.S. Cavalry. Although his enlistment was for three years, his actual period of service from enrollment to discharge would be only seven months and much of that time was spent in the hospital incapacitated by chronic diarrhea. By March, 1863 the disease was so debilitating that he was incapable of performing the duties of a soldier and   granted a medical discharge.

The military behind him, Marshall returned to Groton and, likely the family farm.  How long he remained there is unknown, but by 9/27/64 when, in East St Johnsbury, Caledonia Co., VT he married Lovisa Jane Darling (b. 9/49 Groton, VT) daughter of Wm & Dorcas Darling,  his marriage information noted he was then a shoemaker.

It is unclear if Marshall and Lovina's fifty-plus year marriage ever produced children. While no U.S. Census following the wedding lists children in the Darling household and in 1899 Marshall, in a pension documented noted there were "no children". Other documentation, however notes one child, Bulah being born 11/19/71 and dying exactly one month later. Further, in 1900 Lovina claimed she had birthed two children, one of which was living. However, a decade later she indicated she had borne one child and that child was living. Lastly, at the time of Marshall's death in 1919, no children were mentioned in his obituary.

Where Marshall and Lovina initially settled is unknown, but in 1866 they removed from VT to Red Wing Goodhue Co., MN. Four years later they reportedly moved to Winona County, MN, but interestingly they cannot be found in that year's census. They are there, however in 1880 residing in the community with the same name as the county. If most census information is gathered at mid year, apparently sometime during the latter months of 1880 they again moved, this time to the community of St. Hilaire Pennington Co.  MN. During this period Marshall's occupation was noted as "house carpenter."

In 1888 the Darlings made a big move westward from Minnesota to Washington Territory. Exactly when and why the jump was made is not known, but for certain, at first they settled in the western part of the territory in the Pierce County City of Tacoma. They did not remain there long as in 1891 they headed northward to the Snohomish County city of Everett. Once there, the 1900 and 1910 censuses again listed Marshall's occupation as house carpenter.

Marshall J. Darling died in his Everett home located at 2314 Harrison on July 3, 1919. Cause of the 75.2 year olds passing was apparently heart failure. At death the former Civil War trooper was far more of a carpenter than just a hired nail pounder. By 1919 he was apparently a building contractor who was well respected in the Everett community as evidenced by his Everett Herald obituary which professed that he had erected the first shingle mill ever built in Everett. The obituary went on to note that "Mr. Darling leaves a large circle of friends in Everett won by may years of active business life in the community and by sterling qualities as a man and as a boy." Burial was in Everett's Evergreen Cemetery.

While Lovina apparently remained in Everett following Marshall's death, she can not be located in neither the census for 1920 nor that of 1930. That she was still there is obvious as she died in her home located 2314 Harrison in that city on 7/19/39 from chronic Myocardial (heart muscle) degeneration and senility. At death Lovina Darling was 91.9 years of age. She was buried beside Marshall.

FOOTNOTE: At some point during his lifetime, likely in the early 1890s Marshall had applied for and been granted a monthly U.S. Government stipend based on ailments/illnesses which he traced back to his period of Civil War Soldiering. While the amount of that monthly payment is not known at the time of his death, his widow continued to receive at least a portion of that pension as, at her passing, she was receiving $25.33 per month.