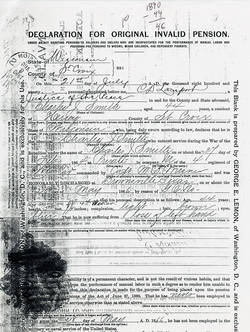 This three year "western theater" regiment was organized at Racine, WI in June, 1863 with a numerical strength of 1,047. It was mustered into Federal service that July and was first assigned to suppressing bank riots in Milwaukee and Watertown, WI.

By 1864 the 4th was in the south fighting Rebels. On November 27th it formed part of a cavalry force around Mobile, AL keeping enemy forces from advancing toward the forces of Union Gen. W.T. Sherman as they advanced upon Atlanta, GA. It spent the winter at Baton Rouge, LA.

In April, 1865 the regiment returned to Mobile. Following the surrender of that city it was sent on a seventy day expedition through Alabama, Mississippi and Georgia.  In July of that year it was ordered to Texas where it served against smugglers, guarded against Indian attacks and "preserved the peace" until final muster.

NOTE: The original birth – to – death biographical profile on Charles J. Smith was written during the early years of the Civil War Veterans Buried In Washington State project. As a result is suffered from size limitations and a lack of research resources.

The biography which follows was created in May, 2019. Although more detailed than its predecessor, it lacks the details of more recent additions to this website which draw heavily upon veteran-related military, pension and other documents housed in the National Archives located in Washington, D.C.

Biographical information pertaining to Charles Jay Smith is, at best, sketchy. He was born in Chicago Cook Co., IL. The year was likely 1845. No birth month or day date has been located in available documentation.

As noted by the birth states of the Smith children, sometime between 1847 and – at the latest – 1850, James moved his family from Illinois to Wisconsin. Details relating to the move are not available.
.

As is the case with many Civil War veterans, immediately following the War Mr. Smith's residence and other life plans are not known. As of the 1870 census, however, he was residing in Mantorville Dodge Co., MN with his mother and two younger siblings. After 1870 absolutely no census findings have been found for him.

As of 1878 Charles was once again living in Chicago Cook Co., IL. It is not known when or why he had returned to the city of his birth.

On 5/28/79 in Chicago Charles married. His bride was Susana (b. ca. 1852 Chicago Cook Co., IL). There are no records indicating the couple produced any children. Further, the fate of Susana Johnson – Smith is not known.

On 7/21/90, as a resident of the community of Hersey, St. Croix County, WI Charles visited a notary public apparently to lay the groundwork for receipt of a U.S. Government invalid pension based on his having, at some point in time, lost his left hand. A monthly stipend was subsequently granted although the monetary amount is not known.

According to his obituary, in December, 1890 Charles moved westward to the Puget Sound region of Washington State.  Exactly why he came to the Pacific Northwest is not known, but once here he reportedly performed clerical duties in the Snohomish County auditor's office. Later, he became the county's first deputy auditor.  In 1893, with another, he formed the "abstract company “of Smith and (E.A.) Strong.

Charles J. Smith, 50 years of age, died 12/5/95 in Snohomish, Snohomish Co., WA.  His passing came at the residence of a Mrs. Ida Curtis "after an illness of several weeks." Interment was initially in that community's Woodlawn Cemetery, but after the creation of the Snohomish Grand Army Of The Republic (G.A.R) Cemetery in 1898 his remains were removed to that location.

Following Charles’  death his mother, Lucretia, still residing in Wisconsin, petitioned the U.S. Government to receive a portion of his pension as a dependent mother. According to the eighty year old Mrs. Smith, Charles had been monetarily supporting her during the previous eleven years.  It is not known if the request was granted.