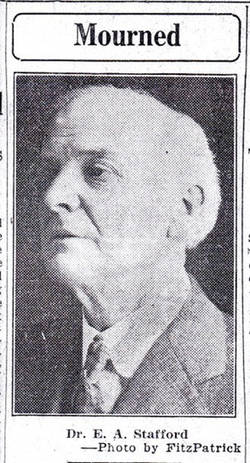 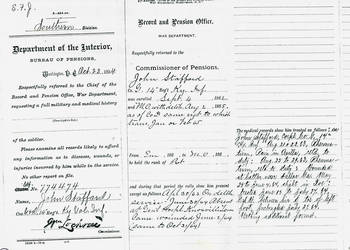 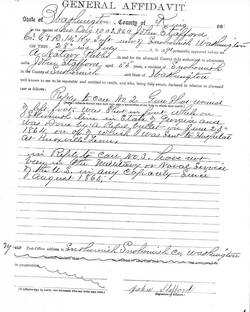 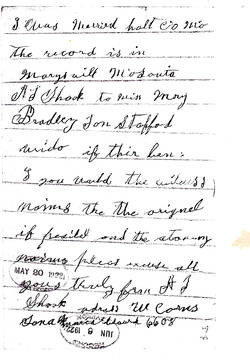 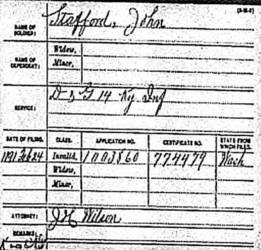 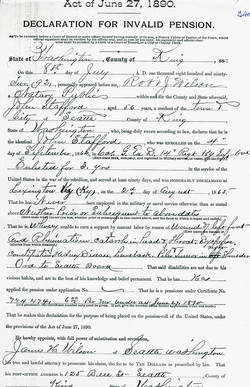 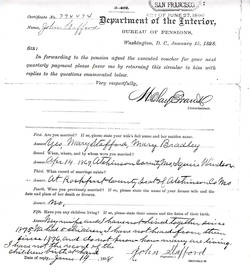 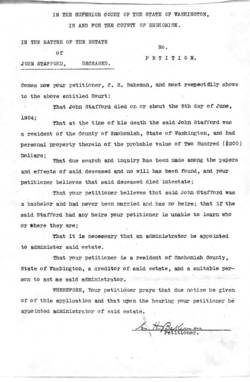 The 14th KY, a three-year unit, was involved in numerous encounters with the enemy before being mustered into Federal service. Following spring ’62 action at Cumberland Gap the regiment remained on duty “in state” where, two years later it was involved in fighting at Puncheon Creek, Piketon, and Pound Gap.

In mid-1864 the regiment left Kentucky for Georgia where it was active in all movements of Union Gen. Sherman’s Atlanta Campaign. During this period it suffered 157 killed and wounded, including 8 commissioned officers. November 1864 found the 14th assigned to the 1st Military District of Kentucky. It remained in that region for the remainder of its service career.

NOTE: The original birth - to - death biographical profile of John Stafford was created during the early years of the Civil War Veterans Buried In Washington State project. As a result it was limited in both size and the availability of research resources.

The biography which follows was written in June, 2019. Although more detailed than its predecessor, it lacks the detail of more recent additions to this website which draw heavily from veteran-related military, pension and other documents housed in the National Archives in Washington, D.C.

John A. Stafford was born in Kentucky. Birth years abound, but most likely he was born in 1836. A birth month that has been noted is January. No birth date has been found in available documents.

In 1850 the U.S. Census found the Staffords residing in Lawrence Co., KY. A decade later, in 1860 they were still in Lawrence Co., but then identified with the community of Paintsville. Perhaps the family had moved within those ten years, but most likely the region where they resided finally had an identifiable town associated with it.

Interestingly, in that 1860 census , William’s parents, John and Mary,  are living  “next door “ to him with six of his children – including our John – in their home. William has the four youngest of his children living with him. There is no sign of Mary, so perhaps she had died.

Although John Stafford entered and exited the U.S. Army as a private, there is one medical notation that, in 1863, “corporal” Stafford was treated for rheumatism and returned to duty.  As of this writing no additional confirmation is available on this possible “non- com” status.  Also, there is no available information pertaining his transfer from Co. “G” – in which his younger brother, Jefferson, also served - to Co. “D.”

While Private Stafford’s later-life physical ailments (kidney disease, head and throat infection, piles, dyspepsia, shoulder tumor) were attributed to his military years (during which he also contracted malaria) the 6’ ½ “ infantryman also received a wound from a rebel bullet.  This also continued to bother him years later.  The wounding, between the toes of his left foot occurred while on a skirmish line near Dallas, GA.  It resulted in a rather lengthy period of hospitalization at Knoxville, TN.  The upshot of all these wartime “traumas” was that by 1891, the now 55-year-old veteran noted, “I am broken down in health.”

In 1876 John severed contact with his children.  This is most likely when, according to family sources, he “up and left for the Hills of South Dakota” to search for gold.  Mary was later granted a divorce as, by 1880, she had remarried to a Mr. Abraham J. Shook. She had also likely received the Stafford farm as part of the divorce settlement because, again in 1880, her children and new husband were still in Benton Atchison Co., MO.

By the mid-1880’s John Stafford had worked his way west to the Puget Sound region of Washington Terr.  While he may have lived in Seattle King Co.  for a time, he is most noted for settling in Snohomish Co. where he “built a home on Stafford’s Island. The only clue to John’s occupation during these years (when he was physically able to work) is a 1900 census notation: fisherman.

On 6/6/04 the Everett (Snohomish Co., WA) Daily Herald noted: “John Stafford, a pioneer of this county was found dead in his room yesterday in the Rainier View Hotel where he had been stopping since Friday.  Coroner Bakeman examined the remains and decided that heart failure was the cause of his death….. So far as known he leaves no relatives in this state.”

At the time of his passing, John Stafford was receiving a $6 per month U.S. Government disability pension stipend based on ailments. or other physical debilities which traced back to his days of Civil War Soldiering. Burial was/is in the Grand Army Of The Republic (G.A.R.) Cemetery in Snohomish, Snohomish Co., WA.

[1] During The Rebellion Thomas served in Co. “B” 2nd KY Infantry.  He survived The War.

[2] During the Rebellion Jefferson served in Co. “G” of the 14th KY Infantry. He survived The War.