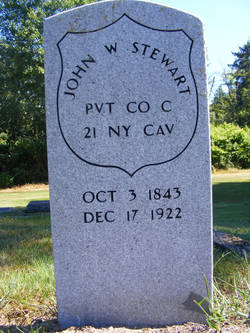 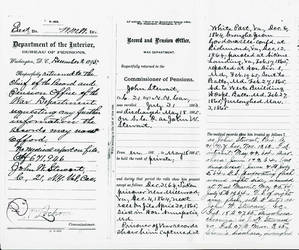 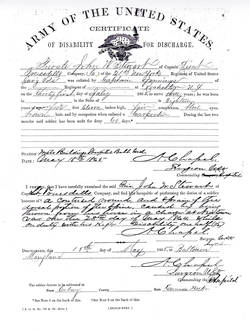 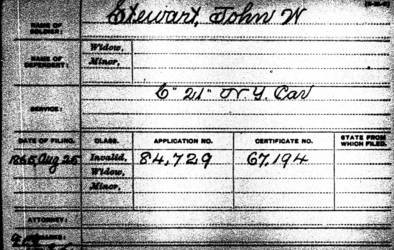 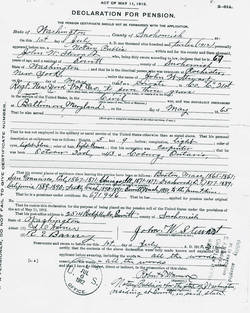 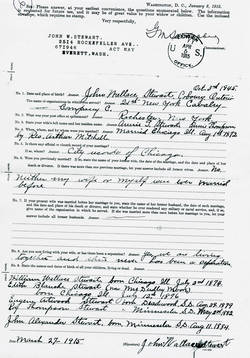 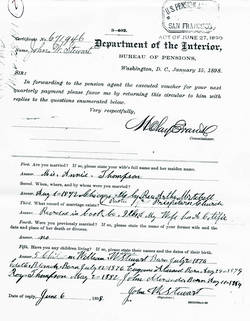 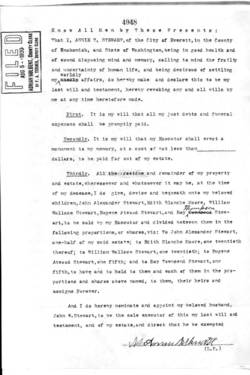 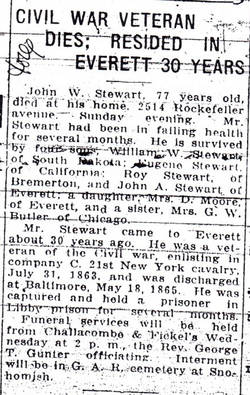 Also known as the Griswold Light Cavalry, elements of the 21st, a three year regiment, rendezvoused at Troy, New York where they were mustered into service from late August, 1863 to January, 1864.  Companies receiving early Federal muster left the state to serve in Washington, D.C. and with the Army of West Virginia.

The regiment was at Remount Camp, MD from Aug. through Oct. ’64, after which it was assigned to the Army of the Shennandoah.  Its greatest losses were sustained in Virginia at Lynchburg, Buckton, Purcellville, Snicker’s Gap, Ashby’s Gap, Winchester, Cedarville, and White Post.

In 1865 the 21st took part in engagements near Paris, Loudoun Co., VA, again at White Post, and finally, near Berryville.  The regiment left Federal service like it had entered it, in bits and pieces.  Seven companies were mustered out at Denver, CO throughout June and July, 1866, while Company A saw final muster at Fort Leavenworth, Kansas in August, 1866.

John W. Stewart was born 10/3/43 in Coburg, Ontario (Canada).  No information is available regarding his birth parents, possible siblings or his childhood, formative and early teenaged years.  He reportedly moved to the U.S. in 1862.

In mid-1863 the 5’9” blue eyed carpenter enlisted in the U.S. cavalry.  In addition to the nearly universal bouts of chronic diarrhea suffered by Civil War soldiers, Private Stewart’s military tenure entailed more serious physical dangers.  First, during the battle of New Market, VA on 5/25/64 he was wounded in the right side and possibly his right arm.  Shortly thereafter, on 5/28 near Newtown, VA, he was thrown from his horse during a charge.  The fall caused a sprain of his spinal cord which would haunt him the remainder of his life.

Finally, on 12/6/64 near White Post, VA, he was taken prisoner by Rebel forces and confined in Richmond until paroled at Aikens Landing on 2/17/65.  For all practical purposes, the war was over for John Stewart, and a few months later he was granted a medical discharge.

In 1899 the Stewart family moved to California where they remained until 1890 when the resettled in Seattle, Washington before moving to Everett in 1891.  Documents are silent as to why any of the moves were made.  By the time John and family were in Washington the infirmities of age and his Civil War soldiering had taken their toll on his body.

In documents filed that year seeking a government disability pension Mr. Stewart noted that he was suffering from rheumatism and a lame back which dated back to his being thrown from his horse during the war.  Further, he noted that he had lost the four fingers of his left hand and could not make a living.  He concluded by noting misfortune had “fetched” him to poverty as he had a family of five to support.  A pension was subsequently granted which, at the time of his death on 12/17/22 after several months of “failing health” amounted to $50 per month.  At his passing the former Civil War trooper was aged 79.2 years.