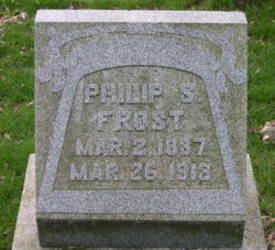 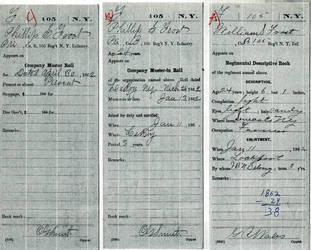 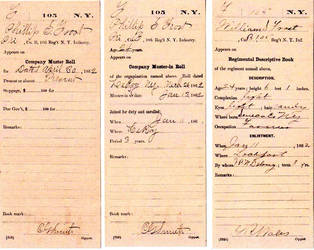 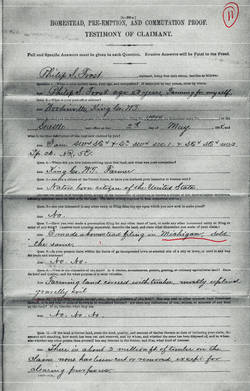 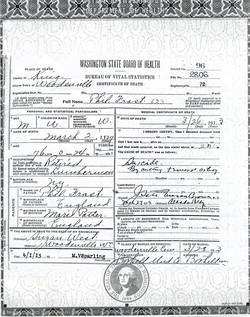 This eastern theater unit, known as the Le Roy or Rochester Regiment, was recruited in the New York counties of Cattaraugus, Genesee, Monroe and Niagara. It was "organized/mustered in" to Federal service on 3/15/62 by the consolidation of two groups of recruits, one having been raised at Rochester and the other at Le Roy.

The 105th left New York State on 4/4/62. It then served at Washington, D.C. for a month before moving southward into Virginia where its first battle was that of South Mountain on 9/14/1862. There the regiment suffered eight wounded. It next saw   action on 8/29 – 30/62 at second Bull Run/Manassas. In this campaign it lost eighty nine killed, wounded or missing.  During the ensuing Maryland Campaign under Union Gen. George B. McClellan the 105th suffered severely at the 9/17/1862 Battle of Antietam MD. It concluded the year by losing anther seventy eight killed, wounded or missing at Fredericksburg (12/6), VA.

By March, 1863 the 105th had lost so heavily in numbers that it was consolidated into five companies which were then merged with the 94th New York Infantry. Thus ended the saga of the N.Y. 105th.

While some sources indicate Phillip S. Frost was born in the year 1838, according to death certificate information, he was aged seventy six years and twenty four days old at passing.  This would make his birth year 1837.

Phillip's birth date was circa March 2nd.  His place of birth was Seneca County, New York. Likely the community was Covert as this is the family's location noted in the U.S. Censuses for 1840 and 1850

Phillip's parents were Phillip (b. 1805 England and Maria/Marie (nee Patter b. 1808 England) Frost. The Frosts were a farming family.

By 1860 Phillip S. - from hereon to be identified only as Phillip - was not residing in his parents' home. Instead, he was in or near the Seneca County community of Romulus living and working as a laborer on the farm of one A.M. Bloomer.

Phillip's younger brother George was the first in the family to answer his country's call to arms to put down a rebellion by thirteen southern states.  In the latter months of 1861 George briefly served in the 75th New York Infantry, Company "F." Shortly thereafter, in January, 1862 Phillip, too, joined the military enlisting  for three years in the U.S. Army as a member of company "B" of the 105th New York Infantry.  At enlistment Phillip's vital statistics were as follows- Age: 24 yrs.; Height: 6'1"; Complexion: Light; Eyes: Light; Hair: Sandy.  His occupation was listed as “farmer."

Company muster rolls for the first half of 1862 show Private Frost as always being present for duty. All that changed, however, in August when, at the epic battle of 2nd Bull Run/ Manassas he was listed as missing in action.  Later, it was learned he had not been killed or wounded, but taken captive during the actions of either August 29th or August 30th. As a prisoner of war he was briefly confined at Richmond, VA, but quickly released under orders to report to Annapolis, Marland's Camp Parole where he would remain until his release/parole and exchange status would be formalized and finalized.

An October 31st muster roll of the 9th Detachment, 2nd Battalion Paroled Prisoners - an organization formed from paroled prisoners of war assigned for duty compatible with their parole conditions (formed by order of June, 1862.....members were to be returned to their commands from time to time by orders declaring the exchange of paroled prisoners and directing their return to their commands) - lists Private Frost as being present. In November it appears he was declared formally exchanged and was to report to Alexandria, VA, to rejoin his regiment. On November 20th, however, his military status turned sideways and/or derailed. One source indicates he was mustered out of the service at Camp Parole this date while others show that he deserted from the Annapolis camp. To make matters more confusing, company muster rolls show him "gained" from Camp Parole and then "discharged." Was the discharge based on having deserted? Did Phillip consider himself to have deserted? In the 1890 veteran census Phillip did not hide his former military involvement and listed himself as having been in the 105th NY Infantry, taken prisoner, but having never received a discharge .Then again, he also said he was a re-enlisted vet. Was he lying or did he truly believe these events really occurred?  We will likely never know the answers to these questions.

From Michigan it appears Phillip moved to the Puget Sound area of Washington Territory. In April, 1888 it is noted that he established a building site for a home in the Woodinville area of northeast King County.  At the time that “improvement” was noted as being worth $25. However, on May 2, 1888, in the Seattle, WT land office he posted a $3 fee for preemptive filing on 160 acres of farm and timberland at the Woodinville site. The parcel was described as being composed of upland sandy and gravelly soil.  In June of that year he built a dwelling on there and moved into it the first of July. Question. Was this and his previous (Michigan) homestead claim based on his having been a Civil War serviceman?  Again, we will likely never know. What is known is that in August, 1889 Phillip stated that by November first of that same year he expected to bring (to the land office) payment and witness proof of his residence on and cultivation of the land.  This he did on November 2, 1889 paying $200 ($1.25 per acre) for the 160 acre parcel.

In July, 1891 Phillip's claim of ownership on the homesteaded parcel was approved. Further, on November 23rd of that year his ownership was patented/deeded.  The details of his homestead property were given as follows: About 2 million ft. of timber. Only clearing for building and cultivation.  House is 14 x 18 ft., 1 1/2 story, built of logs., l door, 2 windows ($125 value), chicken coup ($20), woodshed ($25), 20 fruit trees ($75), l acre cleared ($100), 6 acres slashed and burned ($300. Total value: $700. It was also noted that during this first season he grew 1/4 acres of potatoes and had a garden, although the neighbor's corn had moved into and ruined it. One acre was now cleared. Other notations from the period: Phillip had voted twice in Woodinville and Bothell and had $25 in taxes yet to be paid.

The census for 1900 found Phillip still in Woodinville, but apparently not working his homestead.  Instead it appears he was living with and working as a laborer for one William West. William, having married Phillip’s younger sister, was his brother-in – law. Had Phillip moved to the Puget Sound region because the Wests were there first and encouraged him to join them, or did they move there after him? Further, had Phillip abandoned his homestead or had the Wests taken it over thereby providing Phillip with a place to live and employment without having to entirely support himself. Likely, we will never know

1910. Another decade.  Another census.  The tally for that year once again found Phillip in Woodinville with his brother-in-law and sister. Of note was the fact that he was listed as having "no income.

On March 26, 1913, in Woodinville, Phillip S. Frost died of an apparent suicide. He had severed the femoral artery in one of his legs. At death his occupation was cited as "retired lumberman." Interestingly, while available records give no hint of his having ever been married, his death certificate indicated he was a widower.  Why suicide? Had his health failed? Had he failed in life? Did a bad conscience catch up with him? In conclusion: More questions, but no answers.