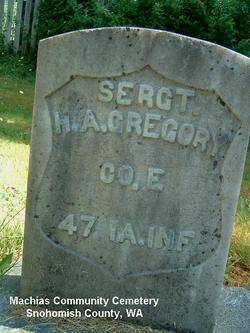 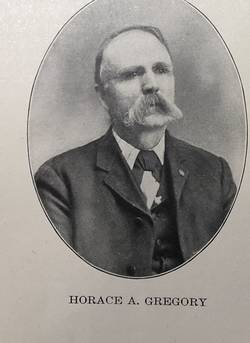 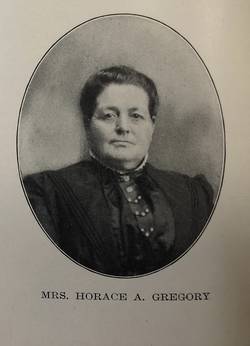 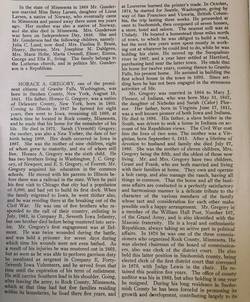 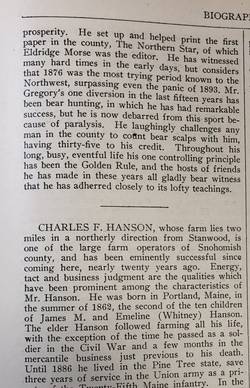 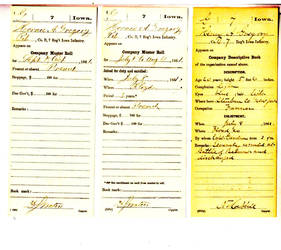 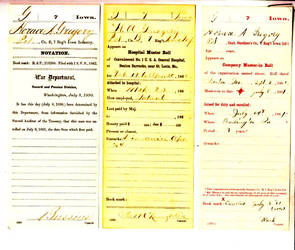 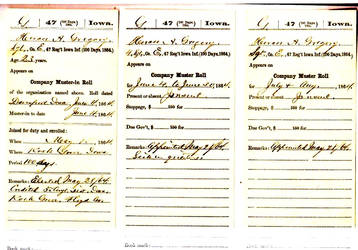 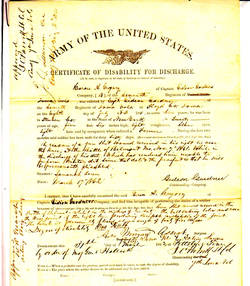 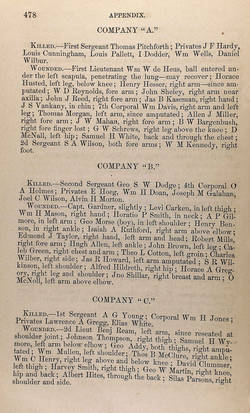 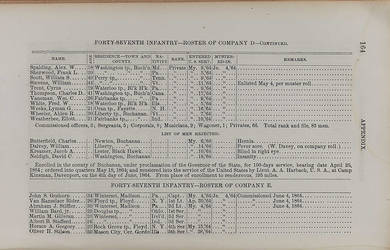 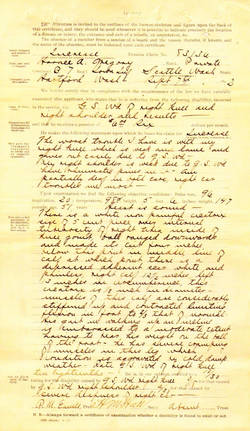 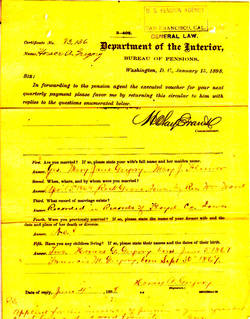 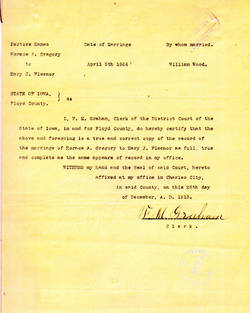 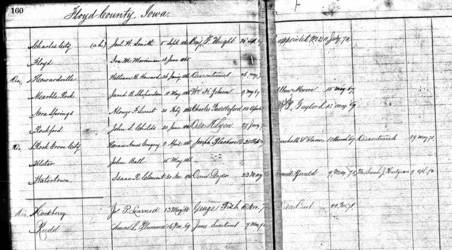 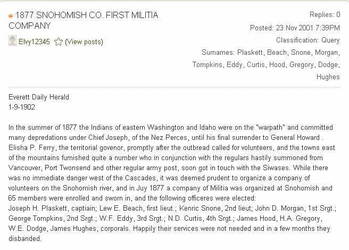 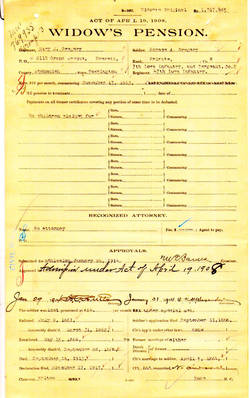 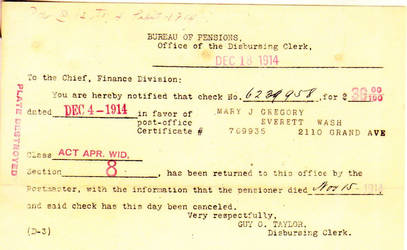 The 7th, a three year western theater regiment, left Iowa on 8/6/61 and moved to Jefferson Barracks located in St. Louis, MO. From there it began actions against Rebel forces operating in that state. During this period it saw action against a Rebel force occupying BELMONT.

In January, 1862 the regiment took part in movements upon forts Donelson and Henry in TN. From there it moved to Pittsburg Landing/Shiloh where on April 7th it charged and captured a Confederate artillery battery. During October action at Corinth, MS the regiment lost one third of its members engaged. Winter quarters followed.

The summer of 1863 was passed in the work of scouting, foraging and train guard service at Bethell, TN. The unit went into winter quarters that November in Pulaski, GA. While in winter quarters three quarters of the regiment reenlisted that December and were furloughed home.

In 1864 the 7th joined Union Gen. William T. Sherman's Atlanta, GA campaign. The regiment took part in nearly every engagement in the movements upon that city. Then, following the capture of that city it went into camp at Rome until it marched to Savannah and the sea.

From Savannah the regiment made the wearisome trek northward through the Carolinas, reaching Goldsboro, NC on 3/24/65. From there it moved to Richmond, VA and then to Washington City where it took part in the Grand Review. Movement to Louisville, KY and final muster followed shortly thereafter.

In May, 1864 Union Gen. U.S. Grant sent his armies southward into Virginia for the Overland Campaign which, one year later, would help bring an end to four years of bloody American civil war. In order to field his armies he pulled many "experienced units" from rear echelon assignments. In order to fill the void created by these troop movements many, new short term organizations were created. The 47th, a "100 day" western theater regiment was one of five such units raised in Iowa.

The 47th - like its sister regiments the 44th, 45th, 46th and 48th - was mustered into Federal service in June, 1864. It was almost immediately sent to Helena, Arkansas where it suffered much from malaria in that unhealthy location. Still, the 47th served willingly and performed loyal duty during its brief period of existence.

Horace Amos Gregory was born in Steuben County, New York. No specific community has been documented. His birth year was either 1840 or 1841. Herein we are recognizing 1841. His birth month was likely August. No birth date has been found.

Parents of Horace were Horace G. (b. 1806 Delaware Co, NY) and Sarah "Sally" (nee Vernold b. 8/10/10 Delaware Co, NY). While it is not documented until later, more than likely the Gregorys were a farming family at the time of Horace's birth.

As noted by the birth states of the Gregory children, sometime between 1844 and 1855 the Gregorys quitted New York and moved to Illinois. In 1850 the U.S. Census placed the household in or near Blackberry located in Kane County, IL.   Six years later, in 1856 it appears as though Horace and brothers Elba, Francis, Salathial and George had split off from the family farm and had a place of their own located in Falls Cerro Gordo Co., IA.  If this, in fact was the case, how this move should be interpreted or explained is not known...............

In 1860 Horace was residing on a farm located in Falls Cerro Gordo County, Iowa. The following year when, he first enlisted in the U.S. Army Horace listed his place of residence as Shell Rock Falls, Iowa.

Private Horace Gregory entered the U.S. Army on 7/8/61. [1} His unit was Captain Gardner's Company of the 7th Iowa Infantry. (That organization would subsequently become Company "B" of the 7th.)

On his enlistment date we catch our first glimpse of Horace as a physical being. He was: 5'6" in height, had a light complexion, blue eyes and light hair. At 20 years of age he listed his occupation as "farmer."

All seemed to go well for our Private Gregory until, that is, November 7, 1861. On that date during the battle of BELMONT, Missouri a musket ball entered the outside flesh of his right leg below the knee joint. It travelled downward exiting from the thick of the right calf. To make matters worse, there are some documental hints that in addition to being wounded, Private Gregory was also captured by Rebel forces.

For all practical purposes Horace's participation in this part of the war was ended. For the next sixty days and more he was moved from military hospital to military hospital in Tennessee and Illinois. Finally, physicians made the determination that the leg joint was permanently flexed at a 45 degree and Horace was granted a medical discharge. Where Horace settled to recuperate from his wound is not noted in available documents.

What had transpired between 1862 and 1864 to render Horace's right leg serviceable - literally - is not known. What is known is that if he did not enlist at the rank of sergeant as some documents indicate, he was either elected or  appointed to that rank not long after his enlistment. The only notation of any problems Sgt. Gregory experienced during his period of enlistment in the 47th is that on 6/30/64 he was noted as being sick in hospital/quarters.  He would remain a sergeant until his final muster and discharge.

With military service behind him for the final time, Horace returned to Rock Grove Iowa and his new bride. The marriage of Horace and Mary would prove to be the first and last for both. During their (1864 to his death 1913) years together the union would produce two sons - Horace G. (b. 6/5/67 IA) and Francis "Frank" Murray (b 9/29 or 30/69 IA) - both of whom, as we shall see, survived well into adulthood and be an important part of their parents lives to the end of their days.

Most U.S. Government disability pensions stemming from The Rebellion did not begin until the early 1890s. A few, however, for "seriously" wounded soldiers began when the wounded combatant was discharged or not long thereafter. Such was Horace's situation. As early as 12/11/66 he was examined and determined to be 1/3 medically disabled because of his leg wound. As a result, on 7/11/67 a $2 per month stipend was granted him retroactive to 9/11/66. In December, 1868 the retroactivity was extended to 6/11/66.

Over the next eight or so years Horace kept pushing for his pension to be retroactive ever closer to the date of his wounding while at the same time he sought a larger dollar payment for his injuries. In that vein, on 4/17/74 when medically re- examined physicians found that in addition his leg wound, while in the army he had also been wounded in his right shoulder by a .22 caliber  ball which had entered, but had never been removed from his body.  Not long thereafter, either on the basis of this finding or other issues, his pension was increased to $2.66 (est.) per month.

As of 1880 Horace, Mary and their two sons had quitted Iowa and were residing under one roof in Snohomish City Snohomish County, WA. What had drawn to the Puget Sound region of The Pacific Northwest is not known. Horace's occupation was then noted as clerk of the district court.

The same living arrangement existed nine years later in 1889, but whether or not the residence was still in Snohomish City is not known as the census reflects only that they were residing  Washington State Territory. At that time Horace's occupation was listed as "merchant."

After 1889 the next residential check on Horace and family comes from 1897. At that time it appears they were likely still in the vicinity of Snohomish City, but in what was known as the Hartford precinct or district. This may well be the same place they were living in '89 but with more emphasis on clarifying their specific location. In 1897 Horace no longer listed an occupation, but did note that because of the gunshot wound to the right knee he was unable to earn a living performing manual labor. Other frailties having beset him by this date were partial deafness, loss of his left eye, rupture and general debility.

1900. A new century, a new decade and a new census. By this date Horace and Mary were still living in Snohomish County, but had moved to the community of Granite Falls. Not only were sons Horace G. and Frank still with them, but also the son’s wives, Rose and Letta. No occupation is listed for our Horace.

The Gregory clan was still occupying Granite Falls in 1910, but by that year son Frank and family had left the family compound and - likely - moved southward into the City of Everett, Snohomish County, WA. Everett was/is the county seat of Snohomish County.

By 1906 Horace's Civil War-based pension had increased to $12 per month. On March 10th of that year when he sought a stipend increase it was rejected on the grounds that his disabilities had not worsened since the last increase. Still, on the twenty seventh of the following month the United States Senate and House of Representatives notified the U.S. Secretary of the Interior was to place Horace A. Gregory on the pension rolls at the rate of $24 per month. No specific details are available pertaining to this event, but this was to be his final rate of pensioning.

October, 1913. By the end of that month Mary left son Horace G.'s home in Snohomish and moved to the home of son Frank and family in Everett. She died at their home - located at 2110 Grand Avenue  - on 11/15/24. At the time of her passing she was receiving $12 per month of her late husband's pension. Mary was/is buried beside Horace in Machias.

[1] Horace's older brother Elba also served in the U.S. Army during the War Of The Rebellion. His units were the 14th Iowa Infantry, 41st Battalion Iowa Infantry and the 7th Iowa Cavalry. He was/is buried in the Machias Cemetery located in Machias Snohomish County, WA.