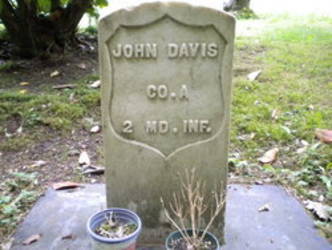 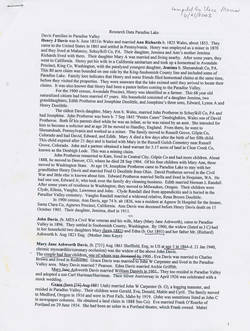 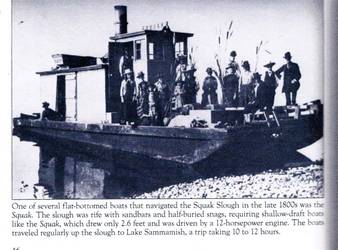 Perhaps the silhouetted man by the engine room door is John Davis?

This three year regiment had the distinction of serving in both the eastern and western theaters of the war. From the time of its Federal muster in September, 1861 it was part of the Army Of The Potomac.  Then, in July, 1862 it became part of the Army Of North Carolina where it remained the end of its term of service.

No historical records have been found pertaining to the formation and roll of the 8th Battalion (Foreign Legion) Infantry CSA. However, it appears as the War ground toward a close, the Confederacy, short on manpower, turned to captured and imprisoned Union soldiers - and likely, sailors - to join their ranks in this unit. While it is not documented, most likely the troops that did enlist with the Rebels performed non-combat and "construction" oriented duties.

John Charles Davis was born on February 2nd in Baltimore, Maryland. His birth year as evidenced in U.S. Census tallies ranges from 1845 through 1850. All that is known pertaining to his birth family is that his parents were of Scottish and Welsh heritage.

On August 3, 1864 John enlisted in the 2nd Maryland Infantry as a "substitute" which means some "draftee" likely paid him a fee to take his place in the ranks.  Family lore, which indicates he was an excellent musician - who, in later years played mandolin and accordion -, has it that in the U.S. Army he was a drummer "boy" for the 2nd.  This could mean that one of the later birth years is applicable for him so, for purposes herein, we will adopt 1849 as his birth year.

On September 30th, almost immediately after being mustered into the military and taking to the field around Petersburg, VA, young Private Davis was captured by the enemy during Union combat actions at Seymour's Farm/Popular Springs Church. Held in a prisoner of war camp he, fearing starvation, on 12/4/64, enlisted in the Confederate Army for three years. It appears his new unit, the 8th Battalion Confederate Infantry was also known as the 2nd Foreign Battalion Infantry or the 2nd Foreign Legion Infantry. Davis entered company "E" of this organization at the rank of 2nd Sgt.  Exactly what Sergeant Davis' duties were while in the Confederate States Army are not known. What is known, however, is that in the early  months of 1865 when the forces of Union Gen. W.T. Sherman cut loose from Savannah, Georgia and began marching northward through the Carolinas, sergeant Davis was recaptured by Union forces.  According to available documentation, this capture was made in Salisbury, NC by cavalry forces under Union General George Stoneman.  It appears that upon being recaptured, Davis was up front about having been a Union soldier who was captured and imprisoned by the Rebels and his having joined the Rebs in order to avoid starvation. Although considered to have taken up arms against the United States and imprisoned by the Federals at Nashville, TN for a time, after taking an oath of allegiance to the Federal Government John was apparently honorably discharged from the U.S. army with a notation that while there was no account of his being due bounty/enlistment bonus monies, he was owed $26 (or $36).62 for clothing, etc. So ended the strange military experience of John Davis.

As was the case with many American Civil War soldiers, where John settled immediately after the conflict ended and what he did for a living is not known. Additionally, nothing is found on him in the 1870 U.S. Census. A decade later, however, he turned up farming in Kaysville, Utah Territory.

Notable from the birthplaces of the Davis children, the family moved on a number of occasions. As evidenced by Mary being born in Washington Territory, by 1884 at the latest the family had left Utah and moved - apparently into the Puget Sound region of Western Washington Terr. The move to Washington was likely prompted by Mary Jane's family being there. According to family lore, Ashworth Avenue in north Seattle is named after Mary's father Richard.  It is said Mr. Ashworth may also have been instrumental in John obtaining a civil (boiler) engineering license.

In March, 1885 John, Mary and their three daughters were residing in the King County community of Houghton - now part of Kirkland, WA - easterly across Lake Washington from Seattle. Two years later the household was still in King County, but by that time had moved southward from Houghton to the community/area of New Castle - part of present day south Bellevue. John's occupation at the time was listed as "engineer."

Family lore indicates that around 1891 the family moved to Chico, Butte County, California where John worked on a "prune ranch." A voter "schedule for 10/12/92 placed engineer John in Chico. It also provides us with the first look at some of his vital statistics which, at age 35 were as follows: height - 5' 10.5"; complexion - fair; eyes - blue; and hair - brown.   If, as told by the family, the Davis' remained in Chico about two years, they  then likely moved back northward to the Puget Sound area of Washington. If that was the case, the move came not long after the 1893 birth of daughter Edna.

Where the Davis family settled immediately after returning to the Puget Sound region is not known. Local historians, however, write that in 1896 they set up household in Paradise Valley, Snohomish County, an area located slightly north and east of the present day City of Woodinville.

1897 circa one year after moving to Paradise Valley, John died. After returning to Washington he reportedly obtained a job as an engineer with the steam-powered "mosquito fleet" that plied the waters of Lake Washington and its tributaries. While serving aboard the "small steam scow" Squak the vessel's boiler blew up severely scalding John.  He subsequently held onto life for three months before dying.

John's burial was in a relatively small private cemetery located just off of present-day Paradise Lake Road northeast of Woodinville.  The burial ground which is now in the "backyard" of a housing development home, is known by several names. Some call it the Paradise Lake cemetery.  Others say it is the Maltby Cemetery, although the community of Maltby is several miles away. A third group refers to it as the Doolittle Cemetery based on the Doolittle family which early-on settled on nearby Paradise Lake.

Of interest in terms of John's gravesite is that it is marked by a U.S. Government-issued military headstone denoting his service in the 2nd Maryland (Union) Infantry. This is highly unusual for an individual who "deserted" his country and "took up arms" against The Union. Obviously, at discharge from the U.S. Army because of Private Davis' unusual situation, all had been forgiven pertaining to his service to the Confederacy making him eligible for a U.S. headstone.

After John's passing Mary Jane remained in the Paradise Valley/Bear Creek area of Snohomish County. It was there the census of 1900 found her with the notations that she was a widow having birthed three children with all three living. In the household with her was ten year old Edna and Mary's 78 year old father who was listed a "farmer."

In 1901 Mary Jane remarried to a Mr. William J. Daniels (b. ca. 1863 OH). The couple remained in the Paradise Valley region. The census for 1910 noted their address as Avondale (Road), King County while that for 1920 listed Maltby, Snohomish County.  According to area historians, the Daniels adopted a son Carl Huriman/Harriman.

The fate and final resting place for Mary Jane Davis/Daniels is not known although it appears that in 1930 she was likely residing in Grants Pass, Oregon with her divorced daughter, Edna Harris.  Mary Jane reported died on January 24, 1940.