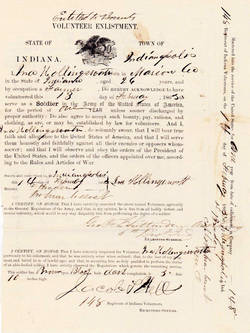 The 148th, a one year eastern theater regiment was organized from within Indiana's 6th Congressional District. It was one of many such state units raised to fill backwater, rear echelon duties as Union Gen. U.S. Grant called more "experienced" regiments to the Army of The Potomac for his May, 1864 Overland Campaign which would strike deep into the heart of The Confederacy and, in April, 1865, for all practical purposes bring an end to four years of bloody American civil war.

Mustered into Federal service on 2/25/65, it immediately departed the state for central Tennessee. There, it was assigned to garrison or guard duties such as those along the Nashville and Decatur Railroad. It remained engaged in such largely” non-combat" tasks until final muster.

Ira Hollingsworth was born at nine o'clock a.m. on 4/28/38. The place of his birth was a 150 acre mostly "unimproved" farm located in or near Indianapolis, Marion County, Indiana, a place to where his parents and older siblings had moved the previous year from Indiana's Randolph County.

Childhood, formative and teenaged years information pertaining to Ira is scarce.  He has not been located in the Census for 1840 and even that of 1850 does not directly identify him. Likely he is misidentified as one of those Hollingsworth children noted above as The History of Skagit & Snohomish Counties (1906 pg. 1079) notes that "he lived with his parents until the age of twenty."

The first documental info on Ira comes from his later years when he was applying for a U.S. Government disability pension based on his earlier Civil War soldiering. In one of those documents he notes that on 10/27/59 In Minneapolis, IN he married Mary Jane Jones (b.3/30/1946 IN). The two would remain together until her passing on 8/28/05. More on this, later.

It appears that following their marriage Ira and Mary set up household either on or near his parents' farm in Pike Township, Marion County, IN. There, it appears he provided for his new bride by working on the farms of nearby "neighbors.”

In April, 1861 Civil War broke out in America. Although having been born into a family in which his father had strong abolitionist leanings, for whatever reason, Ira had not heeded his country's call to arms at that time or even as the bloody conflict dragged into and through 1862, l863 and 1864. In February, 1865, however, - as four years of civil war was grinding towards a close - he departed his farm, young son and wife who was pregnant with their third child - travelled to nearby Minneapolis and enlisted in the U.S. Army for a period of one year.

As a result of that occasion we gain our first look at Ira Hollingsworth the physical man. At enlistment his vital statistics were: Age -26; Height - 5' 10"; Complexion - dark; Eyes - brown; Hair - light. What had prompted this late conflict move? While we can never know the answer for certain, perhaps it was the knowledge that he likely would not be exposed to a combat environment and, more importantly, would receive a $100 enlistment bonus or "bounty", one third of which was to be paid up front with the balance to come in later increments of 1/3. In 1865 $100 was a substantial sum of money. (Note: The enlistment was credited to Franklin Township, Johnson County, 6th Congressional District. Also, while in the military Ira's surname would at times appear as Hollingworth).

Although Private Hollingsworth's enlistment period was for one year and would prove to be shy of six months it proved to be of life - altering hazardous.  That hazard came not from Rebel gunfire, but from an unusual source and in an unusual manner, the first being a fellow soldier and the second being a rock thrown by that soldier. According to later testimony his "friendly fire" incident transpired as follows: While Ira and his regiment was encamped near Pulaski, Mississippi: On or about June 30, 1865 around five o'clock in the morning Private Hollingsworth and fellow soldiers were walking from camp to wash or bathe in nearby Richland Creek. Along the route to the stream they came upon two fellow soldiers, one of whom was on the ground with the second atop him attempting to or striking him on the face and head with a rock. Private Hollingsworth intervened in the altercation to break it up. Doing so, he and his comrades then walked on. That was when the soldier (perhaps Private........Baldwin of Co. "?") who had been wielding the stone threw it (or another) at Private Hollingsworth striking him behind the left ear knocking him to the ground senseless. Ira was subsequently carried back to camp where he ended up in regimental hospital. Unconscious from Saturday to or through Wednesday there was concern enough on the part of the attending surgeon and fellow soldiers about his survival chances that they contacted Ira's father - and likely a brother - to come and stay with him. Although it appears Ira was hospitalized for three or more weeks, he did survive with what the attending physician considered to be permanent damage. When released from the hospital the injury caused dizziness, deafness and pain which resulted in the private being assigned to light duty as a company cook.

Separated from military service in September, 1865 Ira returned to his wife, family in Johnson County IN. There he reportedly worked his parents' homestead until the latter months of 1870 when he and Mary -and apparently his parents' family, too - removed to Kansas. Why the move was made is not documented, but likely it was because of the availability of new farm land. That land would initially be located in or near the community of Elk Falls located in Howard County. I say "initially" due to the fact that by 1875 redistricting placed the home in Elk County.

As the decade of the 1880s dawned the U.S. Government dramatically moved toward offering pensions to the now-aging former soldiers who had helped hold the nation together in the 1860s. During the early months of 1882 former Private Hollingsworth dived into the paper chase that preceded receipt of such a monetary stipend. The basis for the pension request was recurring dizziness he traced back to the Civil War rock incident. As a member of the Elk Falls Rollins Post #26 likely he was, and all fellow G.A.R. members were, aware of the new pension program and urged to apply for benefits.

Although available documentation is somewhat murky on the matter, it appears at some point a pension of $3 per month was granted. That monthly monetary amount may have stood for a number of years, but as of 9/27/87 the question appears to have been raised within the pension system as to whether or not the head injury on which the pension was granted had occurred in the line of duty. The resulting effect was that as of 9/27/87 either an increase in the pension stipend or the stipend itself was rejected. Ira and his attorney appealed.  Thus began a series of depositional affidavits and hearings focusing on the rock throwing incident and whether or not the resulting injuries were sustained "in the line of duty". While the rejection was reaffirmed by the government on 10/18/89, as of 10/17/90 that verdict was reversed and Ira was pensioned for an unknown monthly amount. What is known, however, is that as of 5/11/08 the pension stipend, based on the head injury and permanent aggregate disabilities including heart disease was upped to $15 per month.

As the aforementioned process ground on, sometime in 1890 the Hollingsworth’s decided to pack up their belongings in Kansas and moved to western Washington State where they settled near the northern Snohomish County community of Oso. What had prompted the move to this remote locale is not documented.

Once in the Pacific Northwest former Civil War soldier Ira Hollingsworth applied to the Seattle, King County Washington federal land office for a 160 acre  homestead parcel situated along the north fork of the Stillaguamish River about one mile northwest of the remote community of Hazel. On 5/1/91 Ira and family made settlement upon the land and, with the help of 18 year old son (William) Henry  began construction of a 14' x 26' split cedar, wood frame home into which the three moved sometime the following year. After that, a 12' x 16' addition was made to the basic structure. This resulted in a finished product which was described as having 4 doors, 4 windows plus "a good floor and ceiling." Construction on a 20' x 20' barn, a 10' x 10' root house, an 8' x 10' smoke house, a 14' x 16' woodshed and a 10' x 16' tool shed followed. There also had to have been an outhouse thrown in there somewhere........Aside from structural and fencing construction, between 1 and 6 acres were cleared and planted with sixty (fruit) trees. Also planted were crops of gooseberries, raspberries, strawberries and potatoes. On 7/5/99 publication of the homestead improvements was displayed in one or more area newspapers. While no documentation date is available, Ira did subsequently receive "patent" (deed) to his improved land which was valued, at that time, at $1000.

As the Hollingsworth family's years on the homestead accrued, the farm, under Ira's watchful eyes and leadership and son Henry's able hands, became engaged in not just general farming, but vegetable truck gardening and the raising of poultry. The fruits of these endeavors reportedly found a ready market in lumber camps scattered throughout the local area.

Mary Jane Hollingsworth died on 8/28/05. No details of her passing are available. She was buried in the Oso cemetery.
The following year the previously noted book The History of Skagit & Snohomish Counties said of Ira, that he was a “Republican in politics” and “affiliated with the Christian Church.” As for he and his family it went on to say that "The family is one of the highly - respected ones of the community, enjoying the confidence and good will of all."

The census of 1910 found Ira still in Oso as a widower residing in the home of married daughter Sarah and her family. Whether the household was Ira's homestead or a different location is not known.

Former Civil War infantry soldier Ira Hollingsworth died in Oso, Washington on 3/27/16. No death certificate has been found to document the cause of his death. He was/is buried in Oso beside Mary.