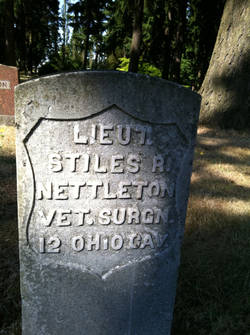 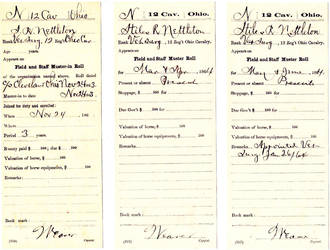 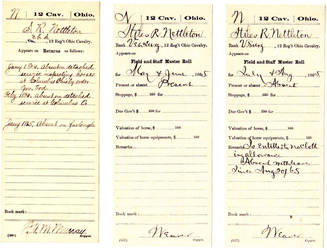 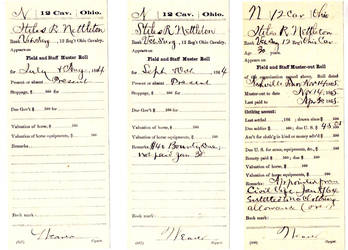 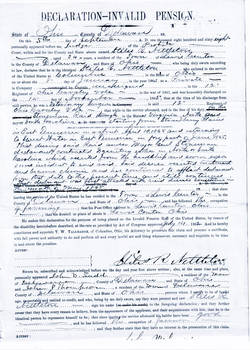 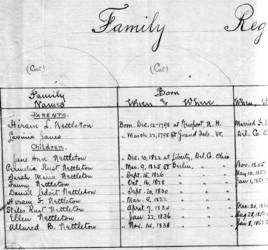 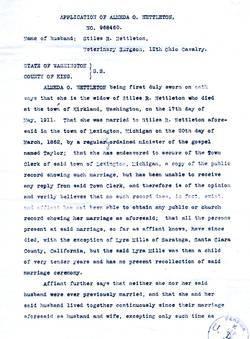 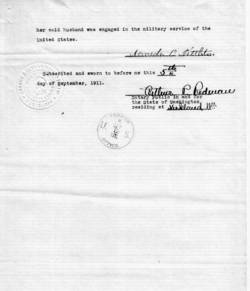 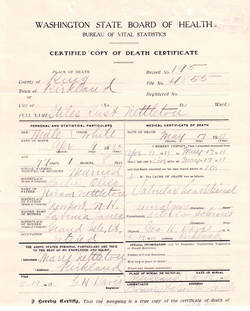 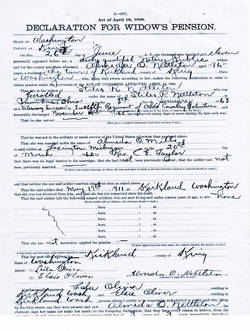 The 12th, a three year western theatre regiment departed Ohio for Kentucky on 11/29/63. It first moved to Louisville, then Lexington and, finally, Mt. Sterling. At that latter location the unit was closely engaged with Rebel forces during June, 1864. It next overtook Confederate raider John Hunt Morgan's troops at Cynthina, Harrison Co. KY and fought with them, scattering his forces in every direction.

In October '64 the 12th was engaged for half a day at Saltville, VA finally charging up a hill and driving the enemy from his fortified works. The regiment did its full share of duty under Union Gen. Stoneman at Bristol, Abington and Marion - all in Georgia; then moved back again to Marion where Stoneman engaged Confederate forces for 40 hours, finally defeating them. In December the 12th revisited Saltville after which it returned to Kentucky with regimental headquarters being established at Richmond.

Spring, 1865. The regiment, again, formed part of a raiding expedition under General Stoneman, during which Salisbury, NC with its stores and Federal prisoners detained there, fell into Union hands. Final muster came in November at Nashville, TN.

Stiles Rust Nettleton was born on either April 7 or April 9 in the year 1834. His place of birth was in or near the community of Berlin located in Delaware County, Ohio.


Exactly where Stiles and Almeda set up house after being wed is not documented. However, their home was likely near Stiles' place of birth as, on 11/24/63, when farmer Nettleton left his wife and new born daughter, Elva, to join the United States Army, that enlistment was credited to the 8th Congressional District, Berlin Township, Delaware County, OH. At enlistment Stiles' vital statistics were noted as follows: Age 28 (actually 29.7 yrs.); Height 5' 9 1/2"; Eyes brown; Hair dark and Complexion fair.

Stile's service-entry rank appears to have been private. For enlisting Private Nettleton received a $100 bonus or "bounty" a portion of which was paid up front with the balance to be received in later increments. Also, the new soldier was granted a one month $13 pay advance.

Stile's, however, did not long remain a private as on 1/26/64 he was appointed to the officer-commissioned status of regimental veterinary surgeon. Obviously while a farmer Stiles had learned more than just a little about horseflesh.

Initially, Private Nettleton was not assigned to a company ("A", "B", "C" etc). Instead his status was "Unassigned". That, too, changed on 1/26/64 when the newly appointed veterinary surgeon's company status was changed from "Unassigned" to ”Field & Staff", the latter denoting attachment to regimental headquarters.

As indicated by his regimental rank/title, Vet. Surgeon Nettleton's roll within his unit was not primarily as a combat soldier. In fact, one of his first assignments in February of 1864 was to be away from the regiment inspecting horses in Columbus, OH. Noted as being back with the regiment as of March, 1864, with the exception of a furlough home on 1/1/65, his status remained "present for duty" throughout the remainder of his enlistment.

Despite what was just written, Vet. Surgeon Nettleton's role was not limited to camp or absentee checking out potential cavalry mounts, as he was later to note that beginning on 4/10/65 he accompanied his regiment during its participation in Union General George Stoneman's great cavalry raid which was launched from Strawberry Plains in eastern Tennessee and ranged throughout Georgia, Alabama, the Carolinas and Virginia before returning to Sweet Water, TN in early June after the war's end. In later years Stiles would point to the hardships and exposure to the elements incurred during this raid as the cause of the chronic dysentery which would haunt him for the rest of his life.

In July, 1865, Vet. Surgeon Nettleton was promoted to the rank of 2nd lieutenant. However, with the war over, the rank was never made official via Federal muster.

In mid-November, '65 after settling financial accounts with the U.S. Government Stiles and the military went their separate ways. As an interesting side note pertaining to this separation, was the notation - one which had been made earlier near mid-year - that he was not entitled to a clothing allowance. Did this mean that while in the military Stiles was not attired in a uniform? Likely we will never know the answer to this question.

Army life behind him Stiles returned to Ohio where he continued to grow his family. His first area of settlement was apparently in Lewis Center an unincorporated community located in north western Orange Township, Delaware County, OH.

As of the U.S. census in 1870 the Nettleton’s were still residing in Delaware County, but in the village of Orange. Whether or not this is the same location as in 1865 cannot be determined. The household at that time was comprised of Stiles, Almeda and their five children - Eva, Alma, Hiram, Clark and Fannie in addition to Stiles' 72 year old mother, Lavinia and a fifteen year old Alabama born youth named Hager Abernathy. In that census Stiles' occupation was not listed as farmer, but "merchant."

As signalled by the birth states of the Nettleton children, at some point between the birth of Clark and Fannie in 1869 and that of Alice in 1873 Stiles and family quitted Ohio for Minnesota. What prompted the move is not documented.

Also not documented is where in Minnesota the Nettleton's first settled. As of 1880, however their place of residence was listed as Glyndon in Clay County. There, Stiles' occupation was noted as being "real estate and life insurance agent."

Census data for 1890 was, for the most part, destroyed by a fire which swept through the Washington, D.C. Census Bureau offices. That being the case, the next we learn of the Nettleton family comes from 1900 when they are found in Seattle, King County, Washington. According to information supplied later, Stiles and family came to Seattle in 1889 after he had obtained a job as a special agent of the U.S. Treasury Dept. The specific nature of that position is not documented.

As an interesting sidebar matter, four years later, on 7/26/04 while in Washington State Stiles received a U.S. patent (No. 765,851) on "laundry tongs" which he had apparently invented. The fate of the patented invention is not known.

By 7/1/05 the Nettleton’s had departed the Seattle area and moved south westerly from that city to the Grays Harbor County community of Aberdeen on Washington's Pacific Ocean coastline. Exactly when that move was made and what prompted it is not clearly documented, but during that year Stiles' name appears in the "Official Register of the United States, Containing a list of the Officers and Employees in the Civil, Military, and Naval Service Together with a list of Vessels belonging to the United States. Volume 1."

1910. Five years after the Nettleton's Grays Harbor residential stay, they were back in King County residing in or near the community of Kirkland located east of Seattle across Lake Washington. While no occupation was listed for Stiles in this year's census tally, it was noted that seven of the Nettleton children were still living. Adult children in the home at the time were Alice, Mabel, Marie and Stiles. An individual identified only as Dott K (b. 1884 MI) was also in residence.

Former Civil War infantryman/trooper Stiles R. Nettleton died in Kirkland, King County, Washington on 5/17/11. Cause of death was listed as "valvular heart disease of several years’ duration" and "arteriosclerosis.” At death he was 77.1 years of age.  Burial was in the Kirkland cemetery.

At some point along Stiles' post war life path he had applied for and been granted a U.S. Government disability pension  based on ailments or illnesses -likely the aforementioned chronic dysentery -  which he traced back to his days of Civil War soldiering. Documental details on this monthly stipend are not available at the time of this writing, but one month plus, after her husband's passing, Almeda initiated the paperwork to obtain at least a portion of this stipend. That such was granted is evidenced by the fact that upon her death in Kirkland on 3/12/21 she was receiving a $30 per month pension allotment. Almeda was buried beside Stiles in Kirkland.