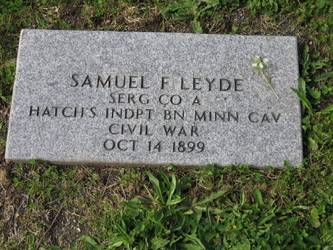 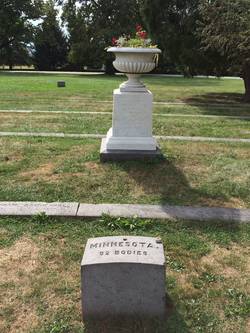 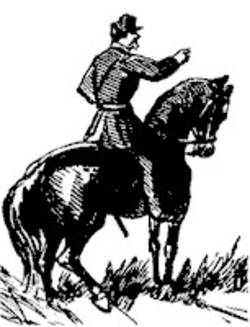 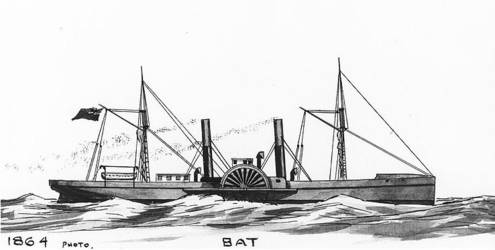 On 5/24/61 two companies of this eastern theater three month, then three year regiment were ordered to Ft. Ridgley, MN to relieve regular troops. The next month Co. "E" also moved to the fort with other companies being sent to Ft. Abercrombie, Dakota Territory and Washington City. In late June all companies were recalled and the regiment was moved to Washington, D.C. and thence across the Potomac River to Alexandria, VA.

During the battle of Bull Run/Manassas (7/18/61) the 1st fought like veterans. Losses were 150 killed, wounded and captured. Moving back to Washington, picket duty and drill followed. The War's first year concluded with skirmishing near Edward's Ferry and the disastrous battle of Ball's Bluff, VA (10/21/61).

In late February,'62 the 1st marched to Harper's Ferry, VA, then moved to Charlestown and Berryville.  By mid-March, however, the unit was back in Washington. It remained there for a time before returning to Alexandria and moving on to Yorktown. Shortly thereafter, it engaged in a skirmish at West Point, VA.

Participating in Union Gen. George McClellan's peninsula campaign in VA the unit fought at Fair Oaks 5/31 -61/1/62) and during the Seven Days' battles. It then encamped at Harrison's landing before, in September, fighting at South Mtn. (9/14) and Antietam (9/17), both in Maryland.  During the latter action the regiment lost 147 killed and wounded.

1863. In late April and early May the 1st fought at Chancellorsville, VA. In late June, it joined the Union movement toward Gettysburg, PA. There, on 7/2, while supporting a battery with but 262 men, the unit charged two Rebel brigades, drove them back and held its positon until relief troops arrived. In that stand, almost every officer was killed or wounded and of the 262 who went into action 215 lay on the field - 47 in one line with not a man missing. The percentage of loss was later said "to be without equal in the records of modern warfare."(Note: The first Gettysburg battle monument, a modest bowl-like structure, was later placed on the site.)


Following Gettysburg the 1st was sent to New York City to assist in quelling the draft riots. It closed out the year with action at Bristol Station, VA and November's Mine Run campaign.

February, 1864 saw the 1st ordered home to Ft. Snelling where, on 4/29, those troops not reenlisting were mustered out of the service. Re-enlistees, new recruits and those whose times had not yet expired were organized into a two company battalion which was named the 1st Battalion Minnesota Infantry. That organization departed the state on 5/16 for Washington. From there it moved south to Petersburg, VA where, on 6/18, it participated in the first assault on that place. Skirmishing along the Jerusalem Plank road (6/21 - 24/64, the assault at Deep Bottom (7 or 8/64) and the battle of Reams' Station (8/25/64) were included in 1864’s final combat actions.

The early months of 1865 saw The War stalemated in the east, but grinding towards a close. On February 2 - 7 the 1st was involved in a sharp skirmish with the enemy at Hatcher's Run near Petersburg, VA. It next participated in the final assault on the Petersburg works and in various actions leading up to Confed. Gen. R.E. Lee's surrender of the Army of Northern Virginia at Appomattox Ct. House on 4/9. After that surrender the 1st was moved to Louisville, KY. From there it travelled back to Ft. Snelling for final muster.

The American Civil war posed unique problems for U.S. waterborne war forces. Rather than focusing on deep water oceanic sites, much of the war would be concentrated in inland rivers such as the Mississippi, the Tennessee, etc. and their tributaries, plus fairly shallow-draft sea ports.

To address this situation, on 5/16/61 the U.S. gunboat service was created. The gunboat service, first under control of the army, but later transferred to the the Navy, was comprised of shallow draft ironclad (all mental), tin clad (metal over wood) and soft-skin vessels which could plie inland rivers and port waters in support of land maneuvers or on sorties of their own.

The Great Western, a side wheel steamer, was launched in Cincinnati, OH in 1857. She was purchased by the U.S. War Department in early 1862 and immediately put to work as an ammunition ship supplying the western flotilla. She was officially transferred to the navy in September of that year thereby becoming the U.S.S. Great Western.

On 7/30/62 while with the mortar flotilla she fired on enemy cavalry attacking the boats near the mouth of the Arkansas River. Her efforts were successful in driving off the Rebel forces.

During latter ‘62and early 1863 the overriding concern of Union forces in the west was the capture of Vicksburg, Mississippi and the re-opening of the Mississippi River  from north to south. As such, within this period U.S.S. Great Western spent much of her time near the mouth of the Yazoo River above Vicksburg supporting combined army/navy operations there.

In December, 1862 U.S.S. Great Western provided support for the joint attacks by Union troops up river from Vicksburg. She remained in that area until the Confederate stronghold fell in early July, 1863.

After Vicksburg the steamer continued in her duties as a squadron supply ship., being stationed at Skipwith’s Landing , MS and Goodrich’s Landing, LA. In July, 1864 she was sent to Cairo, IL as a receiving (induction center) ship.

In March, 1865 as a receiving ship U.S.S. Great Western was transferred to Mound City, IL. She was subsequently sold at auction to a private party on 11/29/65. Beyond this date her fate is not known.

This three year "western theater" organization was created during August and September, 1863, not to fight Johnny Reb in the south, but to perform ”Indian duty" on the country's northwest frontier which, at the time, meant Minnesota and the Dakota Territory.

The battalion left Minnesota for Pembina ND on 10/5/63. It was accompanied by one section of the 3rd Minnesota light artillery. First duty for a small portion of the unit was to escort a transportation wagon train. At the same time, others of the regiment were sent to Ft. Abercrombie, Dakota Territory

For those travelling with the train, the trek proved arduous when a sudden thaw caused the road to be lost. As a result, the train had to rest by day and travel by night. Animals and men suffered greatly, not only because of the weather, but because a contractor failed to deliver necessary hay and grain as agreed. Two hundred fifty horses, mules and oxen died during the ordeal.

In December, ’63 a detachment of the Battalion surprised and captured a party of Indians. Soon after some 200 others surrendered. Others kept coming in until; by the end of the year almost 400 were under the Battalion's charge. In January, '64 two Sioux chiefs involved in the massacre of whites during 1862 where captured. The two, along with others, were subsequently executed.

Movements between frontier forts as well as post and patrol duties was the order for the Battalion's latter period of service. Final muster was by companies during April, May and June of 1866.

NOTE:  The following biographical profile was created by request. Its composition does not include the benefit of military service, pension and other archival documentation. Additionally, as far as is known, Samuel never married or fathered children. As a result there are few "bread crumbs" other than census data to track his cross-country life trek.

Samuel F. Leyde was born in 1831 in Johnstown, Pennsylvania. No birth date or month is available at the time of this writing.

At some undocumented point after the birth of Henry in 1851, the Leyde family quitted Pennsylvania and moved westward to the state of Minnesota. While it is not documented, likely the impetus for the move was new farmland.

In April, 1861, with civil war having spread across America, Samuel, early on, responded to President Lincoln's call to arms by enlisting in the U.S. Army for three months and, then, three years. Except for a brief interlude in 1863, he would continue to serve his county until mid-1866. [Note: His younger brother, James, would also serve in the military during the American Civil War (6th MN Inf. Co. “A”). He is buried in Anacortes, WA]

Samuel would militarily serve his government on three separate occasions.  His first was with the 1st Minnesota Infantry. All that is known about that period of his life  is that on 7/21/61 he was reportedly wounded at the first battle of Bull Run/Manassas, VA Perhaps it was the battlefield experience/wounding that, on 11/16/61, prompted his transfer from the U.S. Army to the U.S. Navy’s gunboat service. In the navy he served aboard the U.S.S. Great Western on the Mississippi River up to and including the fall of Vicksburg, MS.  Finally, in the fall of 1863 he elected to enlist anew in the U.S. army to fight - not Johnny Reb - but Native American Indians. All that is known about this period in his life is that he entered the army as a private soldier and rose to the rank of sergeant before final muster.

As with many Civil War veterans, after his final discharge from the army the life screen goes dark on Samuel. He cannot be located in the 1870 census, but next surfaces in 1880. At that time he was back with his parents who were then residing and farming in Walden, Pope County, MN.

Five years later, in 1885, Samuel was in the Ramsey area of St. Paul, MN.  What had drawn him there is not documented.

By 1890 Samuel was residing in Seattle, King County, Washington. Again, what drew him here is not known. He would die in Seattle on 10/14/99. Burial was in Seattle's G.A.R. Cemetery.

To conclude, upon Samuel's death the following appeared in an unidentified Minnesota newspaper:

"Samuel F. Leyde, a former resident of St. Paul, died at Seattle Oct. 14. He was a veteran of the Civil War having enlisted at the outbreak in Company A, First Minnesota. He served with that regiment until transferred (to the)....gunboat service before Vicksburg, serving in that arm until the fall of the city. In the fall of 1864 (63 ed.) he joined Hatch's battalion and remained with it until the close of the war. His aged mother, Mrs. F. A. Leyde ninety two years of age, survives him. She lives at 151 (?) Kentucky Street."