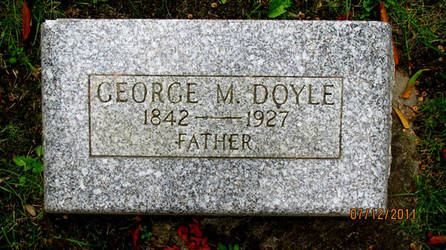 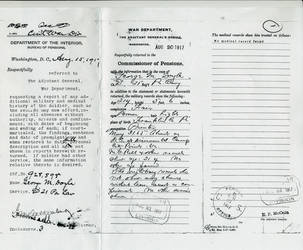 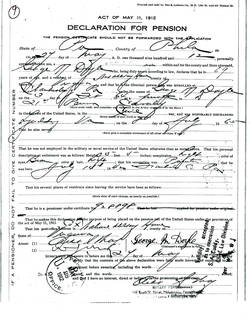 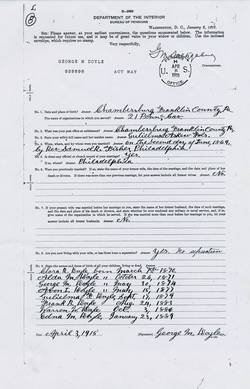 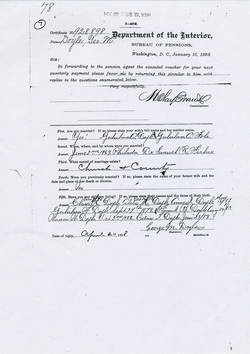 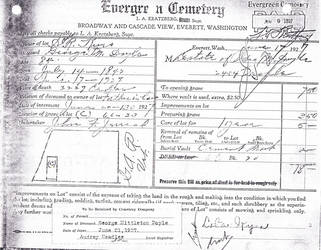 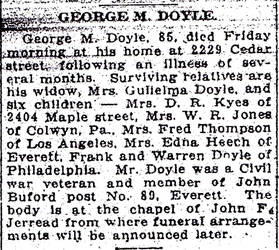 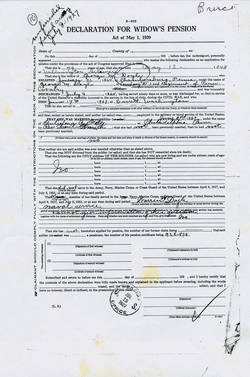 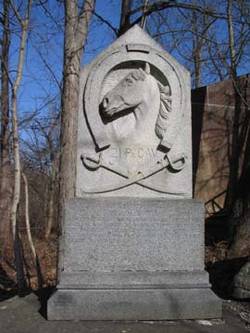 This "eastern theatre" regiment had an interesting history. That history began on 6/15/63 with U.S. President Abraham Lincoln's call for six month militia units to be raised to help counter the threat of Rebel forces then moving northward toward what become three fateful days of battle at Gettysburg, PA. Not formulated in time for that battle, the 21st Cavalry was sent out in company detachments for duty within Pennsylvania and around Harper's Ferry, VA.

About 2/1/64 the regiment was reunited at Chambersburg, PA and reorganized to serve for three years. At that time, those choosing not to re-enlist for the long term were mustered out of service.

In May, 1864 with ranks filled by recruits  all companies, except "D" which was which had initially been detailed to Scranton, PA,  were ordered to Washington where they were  dismounted, armed  as infantry and sent southward to join the Army of The Potomac for Union Gen. U.S. Grant's Overland Campaign. At that time the dismounted portions of the regiment were apparently designated the 182nd Infantry.

The 21st /182nd joined Grant's forces at Cold Harbor, VA and during that  horrendous  June battle lost 1 officer/7 men killed and 4 officers/43 men wounded. June 18 found it in the initial assault on Petersburg where it lost 11 killed, 79 wounded and one missing.  When "the mine" was exploded on 7/30 the regiment met with further loss.  Losses around Petersburg continued at Peebles' farm and Poplar Spring Church. The last cited engagement was the final during which the regiment functioned as infantry.

On 10/5/64 the 21st/182nd was moved to City Point, VA where it was once again mounted/assigned as cavalry. It subsequently lost heavily at the Boydton Plank Road late that month before ending the combat year in December at Stony Creek Station on the Weldon Railroad.

In February, 1865 the 21st participated in the Union movement to Hatcher's Run. By March 1st new recruits had once again brought the regiment up to full strength, but now nearly half the command once again consisted of dismounted men. The latter were ordered to City Point, VA and, in early April, participated in the final assault on the Petersburg fortifications. Meanwhile, the cavalry portion of the regiment had, on 3/29, had begun movements which took them into action at Dinwiddie Ct. House, Five Forks and Amelia Springs. At Amelia Springs in less than an hour's time the regiment lost 98 out of 234 men sent into action. Actions at Sailor's Creek and Farmville preceded Confed. Gen. R.E. Lee's surrender of the Army of Northern Virginia at Appomattox Ct. House on 4/9. News of Lee's surrender came while engaged with the enemy on the Lynchburg Rd.

With the war in Virginia all but ended, the 21st was ordered to support the forces of Union Gen. Wm. T. Sherman then marching northward from Georgia through the Carolinas. It then returned to Petersburg, VA upon receiving the news of the surrender of Confederate forces under Gen. Joseph E. Johnston. Provost (military police) guard duty occupied the regiment, by detachments, until final muster.

In 1850 the U.S. Census found the Doyle family residing in Mercersburg Franklin Co., PA. At that time Isaac listed his occupation as “confectionary.”  A decade later the Doyles were still in Franklin County, but by this date residing in Chambersburg. Isaac’s occupation in 1860 was “printer,” a trade which he also taught his eldest son.

While no details are available pertaining to George's childhood, formative or teenaged years, he obviously had a basic   education and- as we have noted -  trade training as, when the 5'6" fair complexioned, brown eyed, twenty one year old entered the U.S. Army, he listed his occupation as "printer." Enlisting with him was his younger brother, Theodore. Both served in Company “D” of the 21st Pennsylvania Cavalry and both survived the war.

Our Private Doyle's military tenure was apparently exceptionally benign. Except for a 3/3/65 detached service assignment to the cavalry dismount camp at City Point, VA - he may have lost his horse to the rigors of combat or disease - he was always reported as present for duty. Available documents reflect no unauthorized absences, confinements or medical history.

With the War over, it is not clear if George returned to Chambersburg, but he did remain in Pennsylvania. It was there in Philadelphia, Philadelphia Co. on 6/2/69 he married Gulielma Askew Fols or Foley (b. 5/13/48 or '51 Wilmington, DE). Philadelphia also appears to be where George and his bride set up their home.

Philadelphia is also where census takers found George and his family in both 1870 and 1880. On both occasions George’s occupation was listed as “printer.”

While no details on the matter are available, it appears that by 1890 problems had beset the Doyle family. That year George was listed as residing in Philadelphia County Almshouse.

1900. A new century, a new decade and a new census.  George and Gulielma were back together in Philadelphia, PA. Residing in their home were children Frank, Warren, Edna and Florence.

By 1910 George's health was apparently failing, so although still married after 41 years, he was an inmate of the National Home for Disabled Soldiers in Chesapeake, Elizabeth City Chesapeake County, VA. Again, no details are available pertaining to his placement there.

By 1920 Doyle had been reunited with Gulielma in Orange, Essex Co., NY. In that census his occupation was noted as "retired."

By 1927 George and Gulielma had moved westward to the Puget Sound area of Washington State. Likely the move was to be near the families of two adult daughters residing in Everett.

George M. Doyle died 6/17/27 at his home in Everett, WA "following an illness of several months." His obituary noted that he was survived by his widow, four daughters: Mrs. D.R. Kyes of Everett, Mrs. W.R. Jones of Pennsylvania, Mrs. Fred Thompson of Los Angeles, CA and Mrs. Edna Beech of Everett as well as 2 sons: Frank and Warren, both of Philadelphia, PA.

Some years earlier George had applied for and been granted a U.S. Government disability pension based on ailments/illnesses which traced back to his Civil War soldiering.   At death his stipend was $72 per month.

Following her husband's death, Mrs. Doyle began the paperwork to receive a portion of this pension. Sadly, that process was never completed. She died on 7/8/27, only three weeks after George's passing. Both were/are buried in Everett's Evergreen Cemetery.