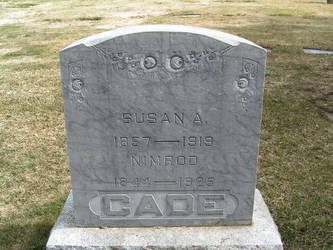 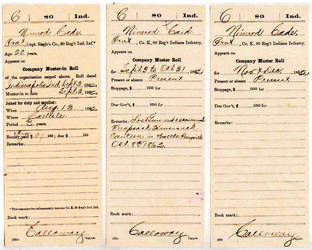 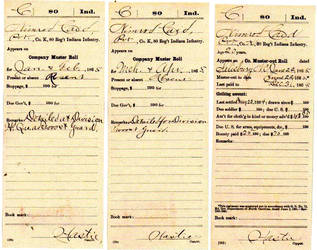 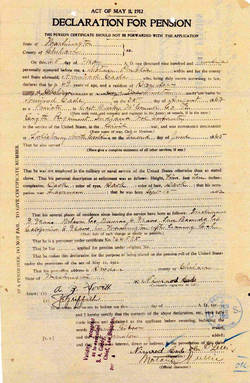 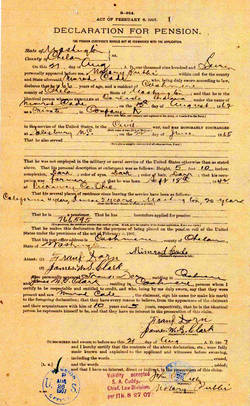 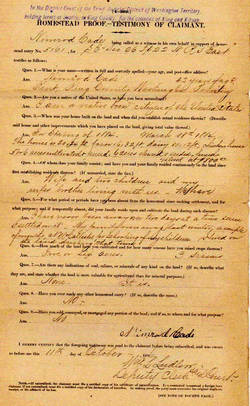 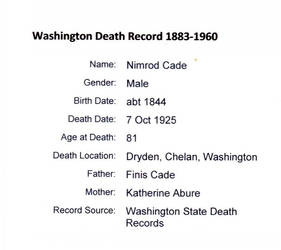 The 80th, a three year western theater regiment was organized and mustered into Federal service during the summer of 1861. On 9/8 it moved to Indianapolis, was there armed and sent to Covington, KY to aid in repelling Confed. Gen. Kirby Smith's threatened invasion.

The unit then participated in the battle of Perryville, KY (10/8/62) where it lost 150 killed and wounded. Following Perryville it remained in Kentucky on guard duty and participating in expeditions against Confed. general Morgan's raiding cavalry.

In August, 1863 the 80th moved into Tennessee. There, it campaigned actively and saw action at Kingston and Mossy Creek.

The regiment left Tennessee in the spring of 1864 joining with the forces of Union Gen. W.T. Sherman as they moved toward Atlanta, GA. During this campaign unit losses were heavy in actions at Resaca, Kennesaw Mountain and Peachtree Creek. After the fall of Atlanta it followed Confed. Gen. Hood's retreating Rebel forces into Alabama. The regiment was then sent back to Tennessee where it took part in the battles of Franklin and Nashville. After the latter it again pursued fleeing Confederate forces as far as the Tennessee River.

In January, 1965 the 80th was transferred to Alexandria, VA. From there it embarked by steamship for North Carolina where it participated in the campaign against Wilmington, Kinston, Goldsboro and Raleigh being conspicuously engaged in the attack on that latter city's Fort Anderson.  After the surrender of Confed. Gen. Johnston's Rebel forces the regiment remained on duty in North Carolina until final muster on 6/22/65.

Ed. Note: The following biographical profile was created upon the request of Larry Johnson, Braeburn Road, Leavenworth (Lake Wenatchee), WA and is dedicated to his memory.

Nimrod R. Cade was born in Deer Creek Township, Pickaway County, Ohio. Although a number of birth years exist, most likely the correct one is 1842. His birth month was September. His birth date was likely the 13th.

Nimrod's father was Phinehas Cade (no b.d.). His mother was Katherine/Catherine (nee. Abure or Alkire b.1808 OH) Cade. The Cades were a farm family.

As per the U.S. Census of 1850 Phinehas is not with Katherine/Catherine. His fate is not known, but likely he had died. She and her brood are in the Perry, Pickaway Co. home of one Elliot Halstead (b. 1800 NY). A farmer, Elliot had five children of his own. Available data does not indicate whether or not Elliot and Katherine/Catherine were married.

1860. A new decade and a new census tally. At this time Nimrod was in Vigo, Knox County, Indiana residing with his eldest brother Isaac, Isaac’s wife, and the couple’s seven month old daughter. Nimrod's occupation was noted as "farmer."

By 1862 Nimrod was no longer residing with his brother.  His town of residence was listed as Newberry, Green County, IN.

On 8/13/62 in Carlisle, Sullivan County, Indiana, he enlisted for three years in Captain Jacob Ragle's company of the 80th Indiana Infantry. That organization subsequently became Company "K" of the 80th.

For enlisting Nimrod received a $100 bonus or "bounty", $25 of which was paid up front with the remainder to be received in later increments. He also was the recipient of a $2 "premium." While in the service his surname in muster rolls would be reflected both as Cade and as Caid. From enlistment/muster in to muster out/discharge Nimrod's rank was private.

Private Cade/Caid's period of service would be fairly benign in that he suffered no serious illnesses or wounding.  Although he obviously experienced combat, he survived the war. The first for the latter was likely the 10/8/62 battle of Perryville, KY. During this action he reportedly lost his rifle and accoutrements was well as his knapsack, canteen and haversack. Details of the losses are not available.

During 1863, except for a brief April absence on furlough home Private Cade/Caid was always present for duty. In 1864 from March onward he was always present, but absent from his company assigned to provost (military police) duty at the divisional level.

In June, 1865, the war having ended, Private Cade/Caid, settled his finances with the government and put army life behind him and returned to Indiana. His exact community of residence, however, is not known.

At some point - likely post war - Nimrod married to Susan "Susie" Anne Wood. On what date and where is not known, but the latter was likely somewhere in Indiana.  The union would produce two sons: Lawrence Noble (b. ca. early 1875 KS) and Romeo "Renny" R. (b. 6/75 CA).

As evidenced the birth locales of the boys, Nimrod and Susie did not remain long in Indiana. According to one source sometime during the calendar year 1868 the couple moved to Wilson, Neodeshe County, Kansas. While the Cades have not been located in the census for 1870, likely they were farming in Kansas as that is what an 1875 population tally noted. That same year, however, the family reportedly quitted Kansas for farm life in California.

The Cade family’s first stop was in San Benito County south of San Francisco, but as the decade of the '70s drew to a close they were southeast of there in Tulare, Tulare County in the heart of California's Central Valley. What had drawn the Cades westward is not documented, but likely it was the availability of farmland in a climate less harsh than that of Kansas........

The decade of the '80s would prove to be a busy one for Nimrod and family. 1880 found the family of three farming in Kaweah Mineral King, Tulare Co., CA. The following year son "Renny" was born in California, but by 1883 the Cades had migrated northward to King County, Washington Territory. There, on 5/16/83 Nimrod filed homestead papers on 160 acres of land located near Titusville - the early name of present-day Kent, Washington. While developing the homestead the family reportedly resided on a ten acre rental farm located in the nearby White River area. The family moved onto the homestead land on 3/18/84.

In the years that followed Nimrod described his improvements to the land as follows: 20' x 24' three room log house with two doors and four windows; 16' x 32' barn built partly of logs and partly of shakes; chicken house and yard; split cedar dairy building; post and rail fence; an almost 1/2 acre garden. Beyond this, five to six or upwards of 10 to 12 acres was cultivated in oats, cabbage and timothy grass. The latter was used to feed the farm's one cow, two yearlings and one calf.

The Cades reportedly remained on the King County homesteaded land between five and eight years. During this period the family lived continuously on the land, being never absent from for more than two days to a week except when Nimrod worked on neighboring fames and during the winter of 1885 when Susie and the children moved 7 or 8 miles away for purposes of the boys' schooling.

For some undocumented reason, by 1887 the Cade family had departed their King County homestead and were noted as residing and farming north of there in neighboring Snohomish County. Exactly where in Snohomish County is not known. The same can be said for 1889.

By November of 1891 the Cades had once again moved. This time the move was east of the Cascade Mountains near the north central Washington community of Mission in Kittitas County. Today that community is known as Cashmere and the county, Chelan.

November, 1891 was also significant for former Civil War soldier Nimrod Cade as that was when, in Seattle, WA, he underwent a medical examination in an attempt to receive a U.S. Government disability pension based on illnesses which he traced back to his days of soldiering. In Nimrod's case amongst others these symptoms included rheumatism of his arms and shoulder, vertigo/dizziness and sweating. On April 18, 1892 such a pension of $8 per month was awarded with payment retroactive to 4/20/91 which was when the pension paperwork process likely began. At his passing the monthly stipend had grown to $50 per month.

Revisiting the Cades move to the eastern Washington State, while they settled on land which was to become first an apple, and then a pear fruit ranch located between present-day Dryden and Peshastin on the south side of the Wenatchee River near the present-day confluence of U.S. Highway 97 and U.S. 2, their community addresses mentioned range along the Wenatchee River from the city of Wenatchee on the east to Peshastin on the west.  Mission (Cashmere) is mentioned in late 1891, in 1894 the family's mailing address is noted as Wenatchee, with a return to Mission by 1896. The census for 1900 placed the family in Peshastin easterly up the Wenatchee River from Mission while in 1907 they are said to reside in Cashmere (Mission). In 1910 the census placed the Cades back in Peshastin, while notations from 1912 and 1920 have them in Dryden. Nimrod's final address would be Dryden. Rather than reflecting moves by the Cades, the changing addresses most likely mirror the evolving population face of east central Washington including the addition of new post offices and rural mail routes.

Ultimately, the Cades would have two home sites. One, their first, was on the site of their fruit ranch homestead. The second, a more elaborate structure, was located a few miles further to the east in or near the little town of Dryden itself.

Significant events affecting the Cades during the eastern Washington years included the 1901 death of their son "Renny." The death occurred along the nearby tracks of the Great Northern Railroad. Likely the young Cade was trying to hop aboard a westbound freight – perhaps  to catch a ride from his Dryden area home to nearby Leavenworth – when something went tragically wrong…………..

Another was Nimrod’s1907 purchase of a 20 acre, steep rocky parcel of land one mile from their ranch home. The purchase was prompted by his interest in utilizing the parcel's pine trees for fuel.

Finally, in 1919 Susie died.  Again, there are no details relating to her passing.

The census of 1920 would be Nimrod's last. That tally placed the 78 year old farmer in the Dryden home of his married son Lawrence and family. It is not known if this is the same household in which he and Susie lived or a different one.

Former Civil War infantryman Nimrod R. Cade died 10/7/25 in Dryden, WA. Burial was next to Susie in the southwest corner of the Cashmere cemetery. Never deeply involved in the activities of the local G.A.R. Post, no military headstone marks his final resting place.