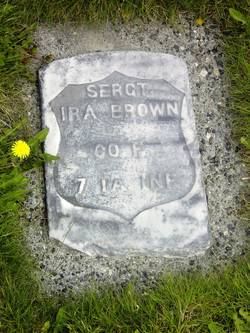 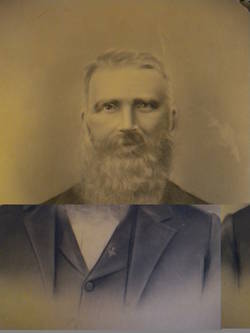 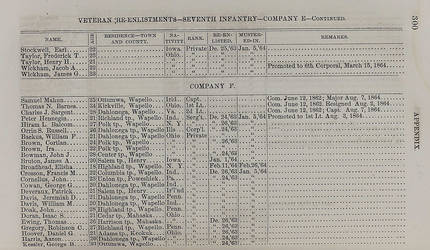 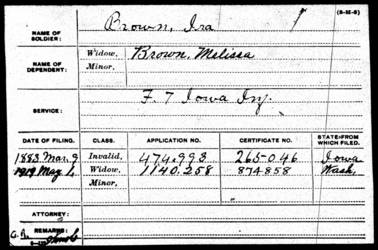 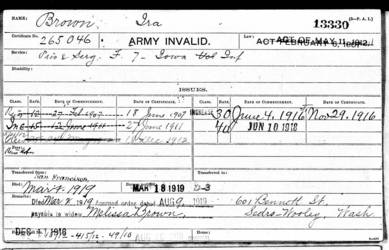 The 7th, a three year western theater regiment, departed Iowa on 8/6/61 and moved to Jefferson Barracks near St. Louis, MO where, within a few days, it was armed an enroute to Pilot Knob and thence to Ironton to take part in movements against Rebel forces in Missouri. From that point the unit moved via Jackson to Cape Girardeau, MO from when whence it embarked for Cairo, IL and Kentucky’s nearby Fort Holt.

After remaining at Fort Holt for a time the regiment moved to Mayfield Creek near Columbus, KY. It next proceeded to Fort Jefferson near Norfolk, MO then accompanied troops to Belmont where it took part in an engagement with Confederates occupying that place. During that action the 7th lost 227 killed, wounded and missing.

Returning to Benton Barracks the regiment passed two months there before, on 1/13/62, it started southward via river steamer. Twenty miles downstream that vessel became trapped in the ice and remained there for two days before breaking free. The 7th then disembarked and moved back to St. Louis.

From St. Louis the unit moved by rail to Cairo, IL.  From that location it travelled to  Smithland, KY and from there to Ft. Henry, TN . It then moved on to  Ft. Donelson, TN and participated in the siege and assault on that place. With the fall of that fortification the 7th moved on to Pittsburg Landing, TN where it fought in the 4/6-7/62  battle of Shiloh.

On 4/27/62 the 7th joined the movement upon Corinth, MS and, upon the Rebel evacuation of that place, took part in pursuit of the fleeing enemy troops as far as Booneville. It then went into camp at Corinth until the last of September. While in Corinth it was actively engaged with the enemy in October. During this engagement the regiment lost one third of its numbers engaged. After stops in three more locations it went into winter quarters at Corinth.

1863. During the summer of that year the 7th was engaged in scouting, foraging and train guard duty in and around Bethel and Corinth. Those assignments continued into the fall at Moscow and LaGrange, TN. In November the regiment again went into winter camp, this time at Pulaski, GA.  While there 3/4 of the regiment reenlisted and was sent home on a one month furlough.

Leaving Keokuk, IA on 2/27/64 the regiment returned to Pulaski, but was almost immediately moved to Prospect, AL where it joined the armies under Union Gen. W. T. Sherman involved in the Atlanta, GA campaign. Initially in that campaign it was heavily engaged at the Oostanaula River. There it lost 7 killed and 50 wounded while the enemy lost 36 killed and around 250 wounded. The 7th then took part in almost every engagement that lead up to Union forces capturing Atlanta. It concluded the year in camp at ROME, GEORGIA.

The 7th remained encamped at Rome until the Union march upon Savanah began. After the fall of that city, in early 1865 the regiment made the wearisome march northward through the Carolinas, reaching Goldsboro, NC on 3/24/65.

The war ended, the 7th marched to Washington City where it participated in the Grand Review. It then went to Louisville, KY where it was mustered into history.

While several birth years and at least two birth months exist for Ira L. Brown, Jr., the year was likely 1841. His birth month and date appear to have been June 4th. The location was Athens County, Ohio.

The 1850 U.S. Census for District 12, Wapello County, IA found Eliza and her two sons residing in the home of Warham Gibbs (age 60 b. 1790 NH farmer) and family. Warham was likely Eliza's birth father.  Six years later, in Cass, Wapello Co., IA Ira, alone, was residing in the family home of Homer Gibbs. Homer, obviously, was a relative of Ira's mother.

By the time the 1860 census tally was conducted Ira's mother was Mrs. Benjamin Haskins (or Hoskinson) having remarried 11/11/52 in Wapello County, IA. The Haskins were a farm family residing in or near the community of Oskaloosa, Benjamin Co., Kansas. The Haskins household, in addition to Ira and his brother, was home to Eliza's father, Warham, and seven Haskins children ranging in age from twenty years to six months of age. At least two of these children - and perhaps a third - were blood half siblings of Ira and Cortlan.

As of 7/11/61 Ira was residing back in Wapello County, IA as that was when and where he - and brother Cortlan - enlisted in the U.S. Army. Private Ira Brown's military service records are not available at the time of this writing, so not much is known about his service career beyond the fact that he re-enlisted following the expiration of his initial three years and rose in the ranks from private to corporal (6/1/64), and from corporal to sergeant (6/28/65) before returning to civilian life. His brother was not so lucky. After re-enlisting on 1/5/64  Cortlan subsequently died of disease in ROME, GA. He is buried in The Marietta National Cemetery located in Marietta, GA.

Exactly where Ira settled following his army separation is not documented, but likely it was in Wapello Co., IA. It was there in the community of Columbia the U.S. census of 1870 found him farming with his new bride, Samantha (no nee, b. 1848 OH). The union produced no children and the marriage proved unsuccessful.

Ira's whereabouts are not documented in the 1880 U.S. Census. Likely he and Samantha were undergoing divorce proceedings in and around this period. When Ira is next documented - 1885 Chillicothe, Wapello Co., IA - he has remarried and his wife has borne him two children. Also, at that time his occupation was noted as "carpenter."

As noted by the birth locations of the Brown children, at some point after 1844 and prior to February, 1887, the Browns had quitted Iowa and moved westward to the Puget Sound region of western Washington Territory. What drew them there is not documented. Their community of residence turned out to be Sedro Wooley located in Snohomish County.

Dropping back a few years, on 3/9/83, while still in Iowa, Ira began the paperwork to obtain U.S. Government disability pension based on ailments or injuries which traced back to his days of Civil War soldiering. A monthly stipend was awarded, but sans necessary documents the onset date, initial amount of, and the highest dollar amount that pension reached is not available for presentation herein.

Ira Brown would live out his days in Sedro Wooley. While census tallies for 1900 and 1910 listed his occupation as "farmer", there is some family lore that he may also have served as  postmaster in the area.

During the 1900 census the Brown household consisted of Ira, Melissa and children Grace, Charles, Nettie and Nellie.  A decade later, the 1910 tally found Ira, Melissa, Charles and Nellie. Also under the roof was a Cleah Phillips who was listed as "boarder."

Former Civil War soldier Ira L. Brown died in Sedro Wooley on March 2, 1919. Cause of death is not known. Burial was in the   IOOF section of Sedro Wooley's Union Cemetery.

Following her husband's death Melissa immediately applied for and was apparently granted at least a portion of Ira's government pension. She remained in in Sedro Wooley and died there on March 29, 1931. She was buried beside Ira.