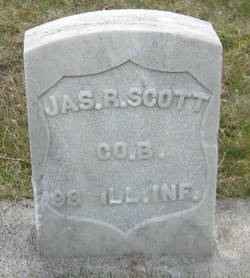 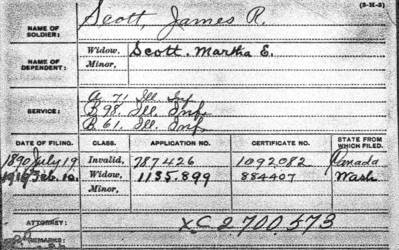 The 71st, a three month "western theater" regiment was mustered into Federal service in late July, 1862. The day following being mustered in it moved from Chicago to Cairo, IL, along the way leaving two companies to guard the Big Muddy Bridge on the Illinois Central Railroad. The regiment remained at Cairo for ten days before being ordered to Columbus, KY. There, the men - mostly from the northern portion of Illinois - suffered severely from the sudden climate change. Upon completion of its term of service 61st rendezvoused back in Chicago where it was mustered out of existence.

The 98th, a three year "western theater" infantry regiment was mustered into Federal service in early September, 1862. Shortly thereafter it was ordered to Louisville, KY by rail. In route the train carrying the unit derailed killing 8 and injuring 75.

In the spring of 1863 the unit was mounted and assigned to duty in Tennessee. There, on 5/23, it had its first contact with the enemy killing 2 and wounding 4. Additional action came in May and June at Snow Hill and Hoover's Gap respectively. Successful actions against Confederate railroads followed.

On 9/18-20/1863 the 98th did "good service" at the battle of Chickamauga losing 5 killed and 36 wounded. Additional actions came in October and December as the armies of Union Gen. W.T. Sherman moved through the southland.

1864. During combat actions of this year the regiment, with Sherman, continued to slice through Georgia ultimately capturing the city of Atlanta.

During April, 1865 the 98th participated in the capture of Selma, AL. Going into the action the once - strong regiment fielded only 172 men, 9 of which were subsequently killed with an additional 2 mortally wounded. Final muster came in late June.

1865. With hostilities having ceased and the War ended, in an effort to save the U.S. Government money, regiments and other military organizations whose terms of enlistment had expired, were mustered out of the service in to In other instances, regiments and military units no longer needed were collapsed and "consolidated" into existing, continuing organizations. Finally, some regiments/military units that were being mustered out because of the expiration of terms of enlistment contained recruits whose enlistment terms had not yet expired. In these instances, the regiment/unit was mustered out and those troops were transferred into continuing organizations to serve out - perhaps only on paper - all or a portion of their remaining enlistments. With the latter circumstance being the case for members of the 98th Illinois transferring to the 61st, the history of this latter regiment is not being presented herein.

ED. NOTE:  The following biographical profile has been created by request. It was constructed without the benefit of military service, pension or other archival documents.

James' birthplace was Danville, Vermillion County, IL. His parents were John J. (b. 1819 VA) and Mary Ann (nee Rowland b. 1820 KY). Information on Mr. Scott's occupation is not legible on available documentation.

On 3/25/57, in Champaign, IL Mary Scott remarried to William S. Moore. Mr. Moore was a "merchant." The fate of John, the father of her children is not documented. During the U.S. Census of 1860 Mary, her new husband and children Caroline, James and Charles were residing in Danville, IL.

James first enlisted in the U.S. Army on 7/7/62 in Danville, IL. At enlistment his vital statistics were noted as: Age 18 yrs. (This would make his birth year 1844); Height 5'7"; Hair dark; Eyes hazel/grey and Complexion fair. His occupation was noted as "student."

With his enlistment period of three months completed, James exited the U.S. Army. Where he settled and what occupation he pursued between the end of October, 1862 and prior to March, 1864 is not given in available documents.


James next appears in March, 1864 when he re-enlisted in the U.S. Army. Enlistment data indicates that by this time he was residing Olney, IL working as a clerk. For enlisting this late in the war he likely received a sizeable monetary bonus or "bounty," a portion of which was paid up front with the balance to be received in later increments. As far as is known James' second stint in the army was benign.

According to available information, after the War James worked as a cattle inspector. He also drove a stagecoach between Ft. MacLeod Alberta, Canada and Helena, MT. On 8/30/86 that Montana connection lead to his marriage to Martha Ella Morrow (b. 5/16/65 or '66 MT). Interestingly, Martha was the product of Scottish - born parents. The wedding took place at Ft. MacLeod. That is also where the wedded couple set up house.

At some point after 1901 the Scott family departed Canada and settled briefly in or near the eastern Washington State Stevens County community of Colville. What prompted the move is not documented. It could likely have been in Colville where family lore has it that Martha would get rid of frequent, but unwelcome, Native American "guests" to her kitchen by sprinkling pepper on the surface of her hot wood stove............

By 1910 the Scotts had again moved. This time their destination was (Old Town) Charleston, next door neighbor to the western Washington Kitsap County City of Bremerton. There James obtained employment in the U.S. Navy shipyard.

On 9/12/14 James was admitted as a resident or "inmate" of the Retsil, Kitsap County Soldiers/Veterans Home. He died there on 1/31/19 and was buried in the soldier’s home cemetery.

After her husband's death Martha remained in Kitsap County. The U.S. Census for 1920 places her in the home of married daughter Carrie and family. By 1940 Martha, too, had been admitted to the Soldiers/Veterans Home. She died there on 9/3/50. She was buried not far from James in the Retsil cemetery.