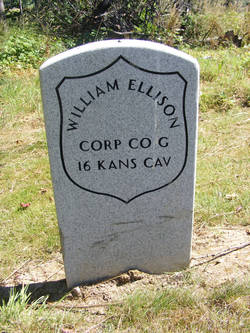 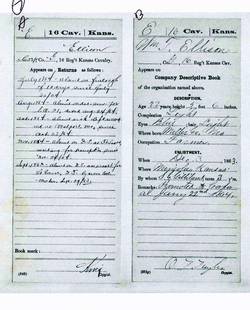 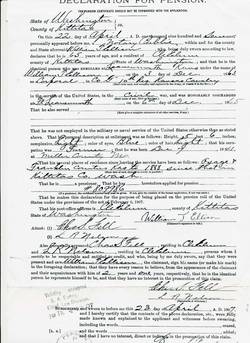 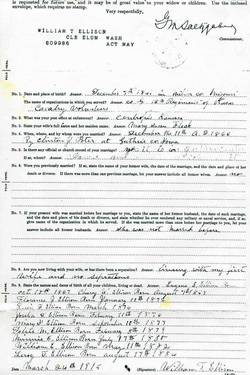 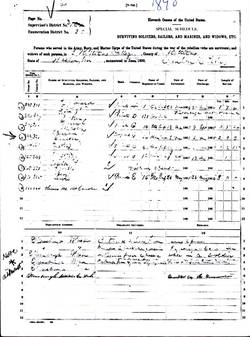 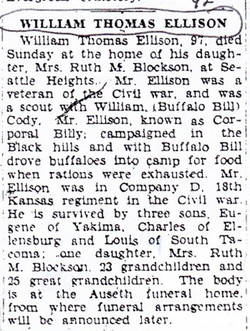 Members of 16th, a three year "western theatre" regiment were drawn from throughout Kansas on the heels of the infamous 8/63 William Quantrill raid on Hays during which Rebel guerrillas slaughtered approximately 150 men and boys. Many of those who volunteered to join the 16th had seen prior service which gave the regiment a head start in terms of discipline and soldierly conduct.

The regiment performed well at the battle of the Big Blue in the vicinity of Westport, MO and during the pursuit of Confederate forces under Gen. Price. For the most part, however, the 16th was scattered throughout Kansas chasing hostile Indians, performing post and escort duty, and guarding defenceless homes from Rebel bushwhackers. Duty assignments drawn by the 16th were often onerous and fatiguing, but well-remembered by the loyal citizens of Kansas.

NOTE: The original birth to death biographical profile on William Ellison was written during the early yeas of the Union Veterans Buried In Washington State project. As such, it suffered from a lack of in-depth research resources and size limitations. The profile which follows was created in October, 2018. While it is much more detailed than the original, it still lacks the detail found in biographies more recently entered onto this site.

.No information is available pertaining to William’s  childhood, formative or teenaged years other than during the 1850 census the family was residing in District  13, Miller County, MO and a decade later were in Richwoods Miller Co., MO. Likely the family had not moved during those ten years, but the territory had become populated to a degree where it was given a name instead of a number.

In December,1863, only a few days shy of his 22nd birthday William, a 5'6", blue eyed farmer, joined the U.S. Cavalry. The enlistment was in the State of Kansas, apparently where his parental family was then living.

Available military service records are inconclusive regarding William’s enlistment/enrolment and muster dates. It appears enlistment/enrolment occurred in late 1863 while his muster date is later noted as dating to 6/22/64. On the other hand, on 1/22/64 he was promoted to the rank of corporal, so he was obviously mustered into Federal service long before mid ’64.

Entering the military in 1864 Private Ellison was due an enlistment bonus or “bounty” in the amount of $100. Twenty five dollars of this was paid up front or shortly after enlistment/enrolment. The remainder was not given until discharge, by which time trooper Ellison had accrued some debts.

Fairly early on in his military tenure William began to owe for his service.  As of 4/30/64 he owed the U.S. Government seventy two to eighty dollars for the apparent loss of a “horse and equipment.”  Shortly thereafter he was found to be owing a sutler, likely Daniel L. Smith, the amount of four to five dollars for what seem to have been the theft of beef.

Other military service entries for 1864 include a July furlough, an August absence on detached service and an October sick/wounded absence after being wounded on 10/23/64 near Westport, MO. The nature of the wounding is not known, but apparently it was not significant as by November he was garrisoned at Ft. Leavenworth, KS awaiting transportation back to his regiment.

1865 entries in the military records reflect only another period of detached service for “escort” duty and final muster.  The latter is interesting in that it was then that Corporal Ellison had to “settle up” with the U.S. government for the previously mentioned pay stoppages, plus a draw on his clothing account.  By that time the equipment lossage was down to $45 while what was owed the sutler was $2.01. Clothing owed was in the amount of $58.90.

The War over and the U. S. Army behind him, William settled on his parents’ farm located in Centropolis Franklin County, Kansas. He would remain in Kansas residing in either Osage or Franklin counties until 1888 when he and his family removed to Washington Territory.

In 1888, the Ellison clan moved from Kansas to Kittitas Co., in eastern Washington, Territory. Why the move west is not known.  Kittitas Co. communities of residence included Cle Elum (1900) and Teanaway (date unk.).

By 1910 William and Mary had moved westward over the Cascades and were living in Tacoma Pierce Co., WA. However, when on 8/19/17 Mary, died her place of death was not in Pierce County, but back in Cle Elum, Kittitas Co., WA The cause of her passing and the location of her burial is not known.

The census of 1920 placed William in the Pierce County, Washington community of McMillan living with son Lewis and family. By 1930 he was in King County living with the family of Henry C. Blockson and wife Ruth (nee Ellison).

William T. Ellison, Civil War soldier, died 6/17/33 in the Seattle Heights, Snohomish County home of his daughter Ruth and family. He was 92.6 years of age.  As an interesting sidelight, his Everett Herald obituary noted that following the Civil War, William had served as a U.S. Army scout in the Black Hills of the Dakotas. During this period “Corporal Billie” was said to have associated with William “Buffalo Bill” Cody driving buffalo into camp when regular food rations were exhausted. While Ellison and Cody both served in the 16th Kansas during the War, they were in different companies. Also, there is no documentation to indicate William ever served as a post-war scout.

William Ellison was survived by three sons, Eugene of Yakima, Charles of Ellensburg, Lewis of South Tacoma, one daughter, Ruth, 23 grandchildren and 25 great grandchildren. Although at death he was apparently receiving a U.S. Government pension based on his Civil War soldiering days, when the funeral home petitioned the government for reimbursement on $115 funeral/burial expenses they noted William was a pauper. It is not known if the expense request was accepted or denied. Burial was/is in the Grand Army Of The Republic (G.A. R.) Cemetery in Snohomish, Snohomish County, Washington.