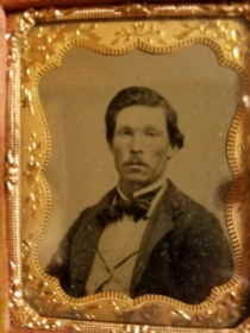 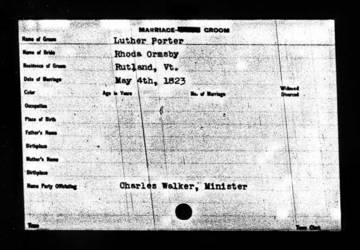 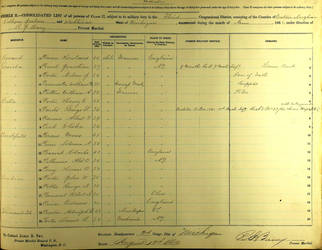 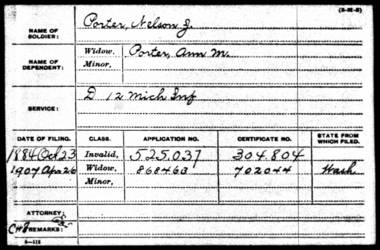 The 12th, a three year western theater regiment was organized and mustered into Federal service in Niles, MI. It left the state 3/18/62 and proceeded to St. Louis, MO. There the men boarded steamships which carried them to Pittsburg Landing, TN.

In Tennessee the unit, newly organized and with no actual field experience, was pushed to the front. No adequate precautions or means of defense were taken to guard against a surprise attack by Confederate forces rumored to be in the area.

With evidence of a Rebel presence mounting two companies of the 12th were dispatched as advanced pickets. These companies were attacked at daylight on Sunday April, 6 and driven back to camp. Their stubborn resistance, however, gave some timely notice to the rest of the Union forces that the enemy was present. Thus began the bloody battle Shiloh/Pittsburg Landing, TN.

That morning the Rebels dealt the Federals a crushing blow. The results were disastrous. That night Union forces lay upon their arms.

During the night the army of Union Gen. Don Carlos Buell arrived on the scene. On Monday the Confederates were driven from the field, but the losses of the 12th were serious.

During the rest of 1862 the 12th occupied stations at Bolivar, TN, Luka and Metamora, MS. During this period while guarding the Mississippi Central Railroad a detachment of the regiment was besieged in a blockhouse fortification. Refusing to surrender to the enemy, after two and one half hours the Rebel forces were driven off.

In June, 1863 the regiment was ordered to Vicksburg, MS. Posted at Haynes' Bluff, it remained there until the fall of that city on July 4th. The investment (siege) of Little Rock, AR followed.

January, 1864 saw the veteranized 12th head for home on a 30 day furlough. That expired, the regiment reassembled at Niles and returned to Little Rock, AR. Arriving at that place on April 1, a series of long marches and skirmishes with Rebel forces preceded the unit's October move to De Vall's Bluff.

The 12th then separated into detachments with different companies occupying posts where ever their services were needed. That remained standard operating procedure until January, 1866 when the regiment was assembled at Camden, AR and mustered out of Federal service. The unit then started for Michigan. Arriving at Jackson, MI on the 27th it was paid off and disbanded.

NOTE: The birth - to - death biographical profile which follows was finalized in August, 2020. It does not contain the depth and detail of other biographies on this website because it was written without drawing upon veteran-related military service, pension etc. files housed in the National Archives in Washington, D.C. At some point\ those files will be accessed. Hopefully the information therein will help clarify some ambiguities in this Civil War veteran's life story.

Nelson J. Porter was born in February, 1829 in New York State. Likely his birth community was Syracuse.  No specific birth date has been found within available documentation.

Looking at where the Porter children were born, the family's moving habits are unclear. Did they move from New York after 1834 and back by 1837? By 1850, however, they were farming in Pittsford Hillsdale Co., MI. At that point in time Nelson was still residing with his parents.

Nelson and Maria produced only one child. Lillian V. Porter was born in June, 1864.

On 2/22/65 Nelson left his wife and infant daughter and joined the U.S. Army. At age 37, almost ten years older than the average Civil War combatant, why would he do that? One reason is likely because it could be seen that four years of bloody conflict was nearing an end. Another is that the enlistment was for one, not three years. Perhaps the most compelling reason, however, was that enlistment bonuses or "bounties" amounting to hundreds of dollars were being paid at the time.

Without having access to Private Porter's military service records we do not have any details on his months of service. We do, though, know that he survived his wartime experience and returned home to Michigan, his wife and daughter.

In the early 1870s the Porters were residing in Homer Calhoun Co., MI. Sadly, that is where Maria Ann died of lung fever on 12/4/72. She was/is buried in the Cooks Prairie Cemetery located Clarendon Calhoun Co., MI.

What happened to Nelson and daughter Lillian on the heels of Maria's death is not known. The next we learn of Nelson comes from the 1880 U.S. Census in Merrick Lone Tree Co., NB. At that time and place Nelson was a boarder/farm laborer on the farm of one William Brewer and his wife, Sarah. What had drawn him to

Nebraska and when he had arrived are unknowns.

1900. A new century, a new decade and a new U.S. Census. That year Nelson was still in Nebraska, but then residing in Merrick County's Central City. No occupation was listed for the then- 71 year old Nelson.

As for Lillian, she grew up and married to one Robert S. Thompson. The Thompsons, at some point, made their way to Edmonds, Snohomish Co., WA. Nelson and second wife Anna M. also moved to the Puget Sound area to be near his daughter and grandchildren.

According to information on his headstone, Nelson died on 2/9/07. No death record has been found, so details

of his passing are not known. He was/is buried in the Edmonds Memorial Cemetery.

Anna Marie Vernan Porter died in Edmonds Snohomish Co., WA on 2/14/19. She was 86 years, 10 months and 18 days of age. Notifying officials of the passing was Mrs. Lillian Thompson of Edmonds. . Anna Marie was buried in Edmonds beside Nelson.

In closing, Lillian died 1/19/59 at the age of 94. Both she and her husband Robert are buried in the Edmonds cemetery.