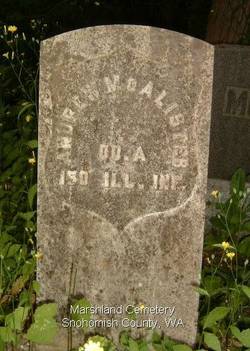 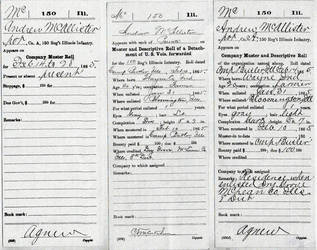 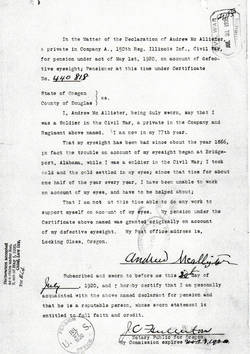 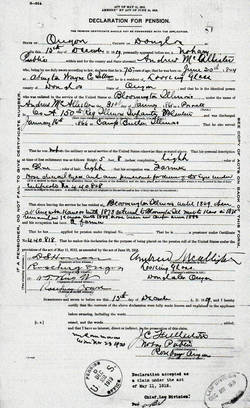 Andrew McAlister declaration for pension 1919 OR 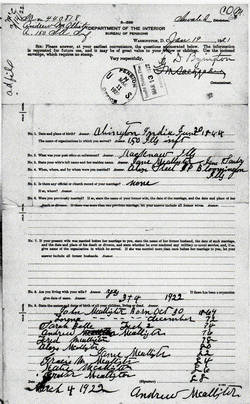 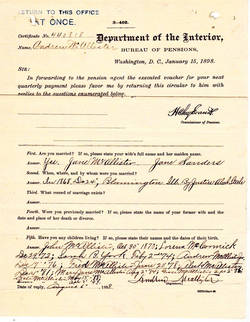 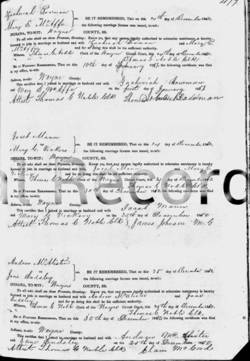 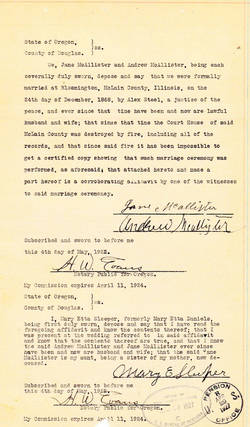 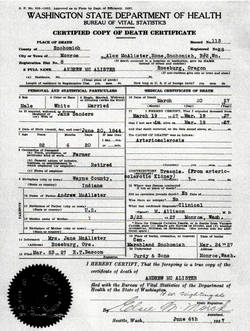 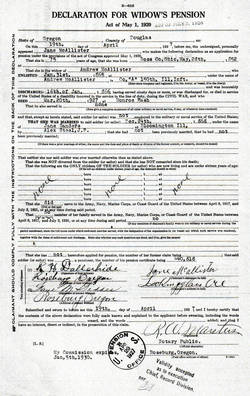 The 150th, a one year western theater regiment, was organized and mustered into Federal service on the same day. Four days later the new unit left for "the front."

On 2/27/65 it arrived in Bridgeport, AL where it garrisoned forts number 3 and 4 as well as blockhouses on the Nashville & Chattanooga Railroad from Bridgeport to Chattanooga, TN. It departed Bridgeport on 3/24 and arrived at Cleveland, TN the following day. From there it moved into Georgia arriving at Dalton on 5/3.

The left wing of the regiment then marched to Spring Place, GA and garrisoned that town until 7/1. During this period the right wing remained at Dalton.

The 150th left Dalton on 7/7 and arrived in Atlanta on 7/8 becoming the first regiment to pass over that road after the grand march of Union Gen. William T. Sherman's troops. It left Atlanta on 8/14 and arrived the same day at Griffin, GA where it occupied the 2nd sub-district-District of Allatoona, 3rd division Department of GA as follows: Cos. "A" and "E" at Griffin; "D" at Jackson; "C" at West Point; "F" at Newnan; "B" and "G" at LaGrange; "K" at Greenville; "H" at Franklin and "I" at Atlanta.

On 12/31/65 the unit was assigned to the District of Atlanta with headquarters in that city. It was mustered out at Atlanta 1/16/66 from whence it travelled to Springfield, IL for final payment and discharge.

* NOTE: The surname signed by Andrew on his enlistment paper appears in one spot as McAlister and, in another, as McAllister. All military service records are under McAllister as are pension papers signed by the veteran.

On his Washington State death certificate his typed surname is McAlister. The same holds true for his youngest child/son, Grover. His widow’s surname, however, appears as McAllister.

While McAlister is also the name which appears on Andrew’s Marshland Cemetery headstone, herein we are going to use the military spelling of McAllister.

The name of Mrs. McAllister, young Andrew's mother has not been found in available documentation. Further, her name does not appear with the family during the 1850 U.S. Census. Her fate is not known, but very possibly she was deceased by the time that survey was conducted. The elder Andrew remarried on Christmas Day, 1850.

The first documental information pertaining specifically to young Andrew (henceforth to be referred to only as Andrew) comes from 1/31/65 when, during the waning days of the American Civil War, he enlisted in the U.S. Army for a period of one year. That enlistment was credited to Andrew's community of residence Dry Grove, McLean Co., IL and the 8th Congressional District. (Note: While one pension document indicates his community of residence at enlistment was MacKenaw, IL, the majority of residential notations mention Dry Grove.)

Here we get a glimpse of Andrew McAllister the physical man. At enlistment his vital statistics were as follows: Age = 20 yrs.; Height = 5'7"; Eyes = gray; Hair = light; Complexion = dark. Not surprisingly his occupation was noted as being "farmer." For enlisting the new Private McAllister received a $100 bonus or "bounty," one third of which was to be paid up front with the balance to come in two additional payments. In a day and age when the pay for a private soldier was $13 per month, $100 was a tidy sum.

Private McAllister's unit was a newly formed regiment designated the 150th Illinois Infantry. Beginning in early 1864 short-term, primarily non-combat organizations were recruited in order to fill rear echelon garrisons and other posts so more "seasoned" or experienced troops could join Union Gen. U.S. Grants in the field fighting the Rebs. Looking at the loss roster for the 150th, the regiment did not see combat and, as such, its only losses were from disease and accidents. While serving his country accident and disease did not take Andrew's life, but  - to a degree - did cause him suffering for the rest of his life and, later, prompted him to seek a U.S. Government disability pension based on conditions which he traced back to his year of Civil War soldiering.

In Private McAllister's case, the first such incident, an accident, took place in March, 1865 near Cleveland, TN. While on a wood gathering detail the team drawing a wagon in which our private was a passenger got the better of the wagon teamster and started running, thereby causing a wheel of the wagon to bump into a stump. The impact threw Private McAllister forward and resulted in his left knee being cut on an axe blade. The injury was treated by the post physician. All in all, despite this traumatic incident, Private McAllister was always "present for duty."

Turning to disease, in June, 1865, while stationed near Atlanta, GA and on guard duty, Private McAllister contracted a
serious cold which "settled" in his eyes damaging them and causing continual soreness.  It would primarily be this occurrence which would, decades later, garner Andrew a coveted pension stipend. More on this later.

With military service behind him, Andrew returned to farm life in Bloomington. The next significant life experience to come his way was his 12/24/68 marriage in Bloomington to Jane Sanders (b. ca. May 1850/'51 OH). The marriage was the first for both. Jane and Andrew would remain together - except perhaps for two unexplained months in 1922 - until Andrew's death.

As noted by where the McAllister children were born, Andrew and Jane did not spend their entire adult lives in Illinois. In fact, some might say they moved quite often.  The family's first move came about sometime during the latter part of calendar year 1869 when, for reasons not documented, they left Illinois and resettled in Augusta, Butler County, Kansas where Andrew again took up farming. The McAllister’s remained there until a point in 1873 when they returned to Bloomington, Illinois. Whether or not the return was to their old Bloomington farm or a new one is not known.

On this occasion the McAllister’s remained in Illinois until 1875 when they, again, removed to Kansas where they farmed around the community of Evan/Galesburg in Kingman County. A regional census conducted a decade later, on 3/1/85, found them in the same location, but with more children in the household.

1886. The McAllister’s were still in Kansas, but now residing in or near the community of Cheney located in Sedgwick County. No explanation is documented for the intra state move.

It was on 4/7/86 while in Cheney that Andrew began the paperwork necessitated to obtain a U.S. Government disability pension based on the two physical frailties which he traced back to his days of Civil War soldiering: The knee cut and the cold that settled in his eyes. In terms of the knee wound he didn't elaborate on how it continued to bother him, but in relation to his eyes and the lingering effects of the cold settlement there he claimed he could perform manual only about one half the time as could a healthy man and, in hot weather, he could not labor at all.

A medical examination conducted in Wichita shortly after Andrew initiated the pension application process made the following observations. The examiners said Andrew’s eye lids were baldy "granulated." The opaquity of the left cornea was quite dense resulting in vision in that eye being 1/10 of normal. As for the right eye, it was only 3/4s normal. It took time, but on 6/20/89 disease of the eye resulted in his being granted a $12 per month stipend paid retroactively to 3/24/86.

When Andrew was granted his pension he and his family were still residing in Kansas. Not long thereafter, however, they moved to western Washington Terr. /State where they settled in Snohomish County. What prompted the move is not documented. Further, exactly when the move took place is also not known. An 1889 Snohomish County census noted he had taken up farming in his new homeland. Also, his new neighbors in Washington quickly rallied around his eyesight handicap championing the fact that he was almost totally blind and incapacitated from earning a living via manual labor. We will revisit this handicap later.

The McAllister’s did not long remain in Washington. The 1900 U.S. Census for Fernwood – a now long gone community near present day Bothell – in Snohomish County listed his farm family as consisting of Jane and children Alex, Jane, Grace, Kate and Grover. A decade later the family had left Washington for the community of Laidlaw, Crook County, OR.  Again, what had caused the move southward is not documented. In Oregon the McAlister family household consisted of Andrew, Jane, thirty year old son Andrew/"Mack", and seven year old son Grover. Later pension documents would note that despite the move to Oregon Andrew and Jane would often return to Snohomish County for visits.

Keeping track of Andrew and family in Oregon is not an easy task. As noted, in 1910 they were in Laidlaw, Crook County. Seven years later, on 3/15/7 however, when Andrew's pension had been upped to $24 per month, they were residing in Deschutes County, but no community designation is given. Likely the intra state move was prompted by the family home being destroyed by fire in December, 1916. We know of the fire because amongst items destroyed was Andrew's military discharge paper, an item for which he petitoned the government for a new copy.

1919. As of 12/22 Andrew and Jane were living near the Douglas County, Oregon community of Looking Glass. That, too, was where the census of 1920 found the couple. By that year all their children had flown from the nest, so to speak.

An interesting note from April 11th of 1921, was - perhaps a surprise - visit to the McAlister home by the secretary of the Roseburg, Oregon pension board. That individual's report read - in part - as follows: "Heart normal.  At 10 - 12 feet can count with wither eye without glasses. Can dress, undress feed self and attend to calls of nature without assistance and do general farm work.  When I arrived I found him at his home out in one corner of his ranch assisting 2 – 3 parties pulling stumps with a horse and cable. When he found out my business he tried to excuse himself stating he was not in the habit of making a hand of himself in outdoor labor. He required no aid or assistance when he went to the house so I could examine him for increase of pension. He advised me that he did not expect an increase to $72 per month but thought he was entitled to a small raise." Bad eyesight? Nearly blind? Hmmmmmmmmmmmm...........His pension held.

Former Civil War soldier and retired farmer Andrew McAllister died on 4/20/27 at the age of 82 years, 6 months and 20 days. Cause of death was arteriosclerosis with Uremia (from the arteriosclerosis) of the kidneys/liver contributing. Notification of the passing was made by Mrs. Jane McAllister who listed the address of both she and her late husband as Roseburg, OR. Death, however, had not visited Andrew in Oregon, but in Monroe, Snohomish County, WA at the home of son Alex. Apparently this was one of the McAllister's frequent "visits" to the Pacific Northwest and one from which Andrew did not return. How long the McAllister’s had been in the area and whether or not Andrew had been ill for any period of time is not known. Burial was on 4/24 in Snohomish County's Marshland Cemetery.

Almost immediately following her husband's passing Jane began the paperwork to continue receiving at least a portion of her late husband's Government disability pension. Whether or not she began the process while still in Washington or waited until she returned to Oregon is not known, but as early as 8/18/27 she was admitted to the pension rolls with a stipend of $30 per month.

1/26/28 found Jane back in Looking Glass, OR, but the census of 1930 located her residing in The Veterans Home located in Retsil, Kitsap County, WA. How, when and why she ended up there is not documented. Perhaps her move there was prompted by her children residing in western Washington.

Jane McAllister died on 3/22/34. She was buried in Marshland beside Andrew.