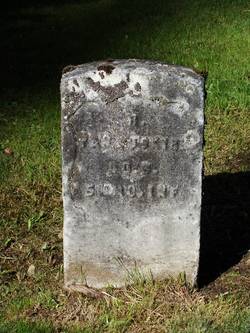 During the spring of 1864 Union Gen. U.S. Grant began his Overland Campaign in the heart of the Confederacy. In doing so, he drew "experienced" troops from many rear echelon positions and placed them in the field. In order to fill the void created by withdrawal of these troops many short term regiments were authorized and formed. The 51st a one year unit which served its entire period of existence within the state of Missouri, was one such regiment.

By an order issued 1/30/65 during the winter of 1864 - '65 the organization of six infantry regiments was authorized by the provost (military police) marshal general. Of these regiments only the 51st, 52nd, 54th and 55th came anywhere near reaching the full complement of 1000 men and officers.

On 5/1/65, the shooting War having ended, a special order directed the consolidation of the 51st, 52nd, 54th and 55th infantry regiments Missouri volunteers, Co. "A" with its officers, and a detachment of Co. "B" 52nd infantry, Missouri volunteers were consolidated into one company and transferred to the 51st as co. "E" of that regiment.

Companies "E", "F" and "G" of the 51st Missouri were thereafter designated as companies "F", "G" and "H" respectively. Detachments of the 54th and 55th were then consolidated into two companies and transferred to the 51st as companies "I" and "K" of that regiment.

The above gives the official record of the organization of the 51st which was mustered into Federal service in early May, 1865. During its short period of service the 51st was stationed at St. Louis. There it performed guard and escort duties. It was mustered out of existence on the last day of August, 1865.

Rufus VanBuskirk was born June 27, 1834 in Morrow County, OH. While it is not documented, his birth community was likely Perry. In the same vein, while it is not found in available documents his middle name was probably Judson.

Sometime in 1852 John VanBuskirk moved his family from Ohio to Missouri. In Missouri they settled in Savannah Andrew County which is located in the far northeastern corner of the state.  Exactly when the move was made and why is not known.

On September 28, 1856 in Andrew County, Missouri Rufus married his cousin Margaret (b.ca. 1835 OH) Van Buskirk. No details are given pertaining to this unusual pairing. The two remained together as man and wife for the rest of their lives.

Rufus and Margaret's first child, son christened Milton L., was born on January 5, 1860.  Their second, daughter Ora Etta, was born (no b.d.) in 1864. There were to be more little VanBuskirks, but first Rufus had to do his part to end a bloody civil war which had held the U.S. in its grips since the spring of 1861.

On February 25, 1865 as America's Civil War groaned towards a weary close, Rufus and his cousin Henry VanBuskirk braved the snowy cold of winter and, in Savannah, Missouri, enlisted in the U.S. Army for a period of one year. The unit of choice for both was Company "B" of the 51st Missouri Infantry. At enlistment we get a glimpse of Rufus VanBuskirk the physical man. His vital stats were as follows: Age = 30 yrs. (above the average 27.5 age of an ACW combatant); Height = 5' 7" (fairly average for the day); Eyes = hazel; Hair = dark. Of interest because of its highly unique nature was Rufus' occupation: "artist."  Suffice it to say that both Rufus and Henry survived the war. [1]

With army life behind him, Rufus returned to Savannah. What kind of work he initially did to support himself, his wife and family is not known. By 1870, however, the census would note that he was farming.

Back at home the VanBuskirks continued to add to their family grouping. In 1867 son John Franklin was born. Sadly, the following year his older sister, Ora, died.

1870. A new decade and a new census. The VanBuskirk's with their two sons were still in Savannah. Also in the home at the time were Rufus' father in law and mother in law/uncle and aunt. Later that same year son Rufus Judson was born.

In 1880 the VanBuskirk clan was still in Missouri but no longer in Savannah or Andrew County. Instead, they were living south of there in  Nodaway Township which is located in Nodaway County.  Again, why the move was made is not known.  Rufus' mother in law/aunt was still in the home, but his father in law/uncle was gone. In Nodaway Rufus the artist and farmer was now Rufus the photographer.

As the decade of the 1890s dawned, Civil War veterans, both north and south, were graying. On the side of the victorious Federals especially, U.S. Government disability pensions began to be championed for the aging warriors. In this vein, millions of former soldiers, sailors and marines began the paper chase which would hopefully garner them monthly stipends based on ailments and illnesses which prevented them from earning a healthy income performing manual labor and, more importantly, they traced back to their days of military service. Former Private Rufus VanBuskirk was one of those who sought such a stipend he filing the initial paperwork on October 13, 1890. While a stipend was granted, without U.S. pension files, details on the grounds upon which it was based and dollar amounts throughout its period of application are not nor

During the 1890s we kind of lose track of Rufus. Although he and Margaret were likely in Missouri, the census results for that decade were destroyed by fire, so we do not know that for sure. For sure we do know that their sons were living and working around St. Joseph. Speaking of sons, in 1894 John Franklin died.

In 1902 Rufus and Margaret packed up and quitted Missouri. Their move was westward to Tacoma, Pierce County, Washington. What had drawn them to the Pacific Northwest is not documented.

Rufus VanBuskirk died in Tacoma on July 3, 1907. His age at death was 73 years, (blank) months and 10 days. He was buried in the (old) Tacoma Cemetery. Margaret joined him there a few short weeks thereafter, she dieing on July 31, 1907.

[* NOTE: This personal/family profile was created at the request of Justin Thomas. Justin is Rufus VanBuskirk's great, great grandson. It was developed with the aid of VanBuskirk family lore and U.S. Census data, but without the benefit of U.S. archival military service, pension or other records.]

1] According to family lore, Rufus' older brother Harvey also enlisted in the 51st Missouri Infantry. He did not survive the war, and was/is buried in Missouri.  However, as of this writing his name has not been located on the roster of the 51st or any other ACW military organization.