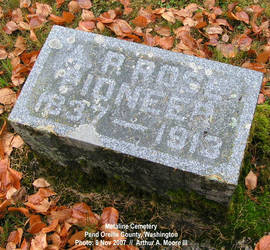 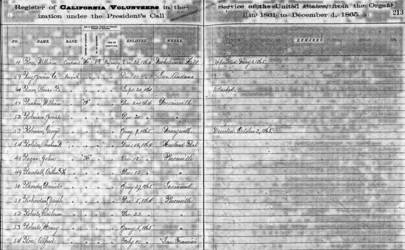 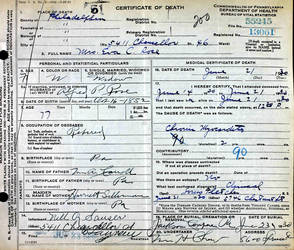 This unit was the last California regiment raised under the Congressional Act of July, 1864. It had a total enrollment of 960 officers and enlisted men. Regimental headquarters were located on Alcatraz Island in San Francisco Bay until April, 1865. In April, '65 headquarters was moved to Ft. Winfield Scott located at Fort Point San Francisco and remained there for the remainder of the 8th's short period of service.

Company "A" served at Ft. Scott on Fort Point until February, 1865. It was then transferred to Washington Territory and Oregon for the remainder of its service

About the same time Company "B" was sent to Ft. Stevens near Astoria, OR. Other companies were stationed at Ft. Point, Alcatraz, Angel Islands and Benicia Barracks.

No regimental loss data pertaining to commissioned officers and enlisted men is available.

ED. NOTE: The following birth - to - death biographical profile has been created "By Request." As such, it does not draw upon military, pension and other files housed in the National Archives in Washington, D.C. As a result it lacks the depth and detail of many other profiles found within this website.

NOTE: Available documentation present Mr. Rose' first name as both Alford and Alfred. As the American Civil War Research Database features Alford it is that spelling that is being used herein.

It appears John and Polly, circa 1845, moved from Mercer Co., PA and pioneered Lee County, IA Terr. In Iowa John and two of the family's four children died. Polly then moved back to Mercer Co., PA with sons Alford P. and Ephriam Lamont (b. 1843 - d. 1879*) and remarried to one Samuel Buck. This is all we know about Alford's birth family.

In 1850 Alford was residing in Coolspring Mercer Co., PA with his mother, stepfather and younger brother. The head of the household was Alford's paternal grandfather, Samuel Pearson (b. ca. 1780 PA).

Alford reportedly moved west to California in 1858. His travel route from the east took him across the Isthmus of Panama. All his life Alford would list his occupation as "miner", so heading to California he was likely following in the footsteps of the '49ers. According to a British Columbia, Canada "obit" written following his death, upon reaching California Alford located "in the Southern mines at Columbia, Tuolumne County."

The B.C. obit source cited above also indicates that, in California, during the early days of the (American) civil war Alford was commandant of the Union organization. Exactly what that entailed is not known, but it likely had to do with making sure California, with its riches, stayed in the Union.

Mr. Rose's direct connection to The Rebellion came during the waning days of that conflict when, in February, 1865 he enlisted as a private in Co. "K" of the 8th California Infantry. Without access to his military service records all we can say about his months in the 8th is that it appears he was stationed in the San Francisco Bay Area throughout his enlistment.

While we have no details, with the War behind him it seems likely Alford continued his wanderings in search of striking it rich.

According to the British Columbia obituary cited earlier, during his lifetime Alford engaged in placer gold mining in California, Oregon, Idaho, Montana, Washington (he allegedly lived in Seattle for a time), Georgia, British Columbia, Canada, Alaska - He was reportedly in Nome, Alaska ca. 1900/'01 - and Mexico. For the most part, exactly when he was in all these locations and in what sequence, we do not know.

In 1910 Alford and Eva were residing in or near the community of Metaline located in the far north eastern county of Pend Oreille Co, WA. Their son, Edwin, also a miner, was living in that area, too.

The 5/3/13 camp believes Alford died in Seattle King County, Washington. The other camp does not say where the old soldier's death came, but it was likely in eastern Washington and not in Seattle because burial was/is in the Metaline Cemetery located in Pend Oreille County.

After Alford's passing Eva and son Carroll - a shipyard carpenter who had been working in Seattle - moved to Portsmouth, NH where daughter/sister Nell lived with her husband Howard E. Sausser. Eva later moved to Philadelphia, PA. She died there on 9/21/30. She was/is buried in Jackson Center Presbyterian Cemetery located in nearby Mercer Co, PA.

*During the American Civil War Ephraim served in Co. "A" of the 139th Pennsylvania Infantry. He survived the conflict and was granted a U.S. Government disability pension.