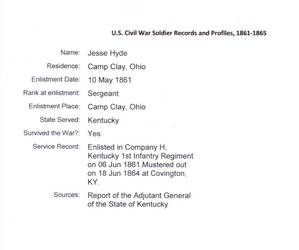 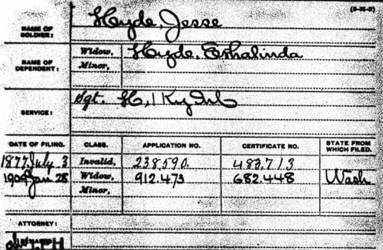 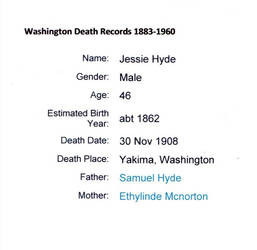 The 1st, a three year western theater regiment, was organized at Camp Clay, Pendleton, Ohio in June, 1. As mustered into Federal service it was composed almost entirely of Ohio Men.

Leaving Ohio, the unit was ordered to the department of West Virginia where it performed valuable service during the early engagements of the War.

In January, 1862 the 1st took an active part in the Union advance upon Nashville, TN. During this period it participated in

numerous battles in which losses were sustained.

Also, in January, 1862 Company "E", was detached as artillery. It's designation was the 1st Kentucky Independent, or Simmonds battery. Another name for the same battery was the 23rd Independent Battery, Ohio Light Artillery.

Its term of service having expired, the 1st was mustered out of Federal service and existence at Covington, Kentucky.

ED. NOTE: The birth – to – death biographical profile which follows was created “By Request.” This means it is based on U.S. Census data, family lore and whatever other information may be readily available pertaining to the veteran. It does not draw upon military, pension, homestead and other documents housed in the National Archives in Washington, D.C. As such, it does not reflect the depth of detail found in other biographies found within this website.

Jesse Hyde was born in Ohio on April 17, 1832, the son of Samuel Hyde. His Washington State Death Certificate lists his mother's name as Ethelinda L. McNorton, but this is no doubt in error since Jesse's wife was Ethelinda McNorton. More on this, later.

Jesse apparently came to the west coast around the time of the 1849 gold rush in California. He then joined one of his brothers in Linn County, Oregon. In fact Jesse’s name appears on a list of men from Linn County, Oregon who served in Captain Jonathan Keeney's Company in the Rogue River Indian War, 1850 - '56. It is in a muster roll of Company "C" second regiment Of Oregon Volunteers (Col. Robert L. Williams) at Eugene on October 25, 1855.  On December 3, 1857, he was appointed postmaster of the Washington Butte Post Office in Linn County, Oregon near present day Le banon. His successor was appointed on December 31 of the following year, so he may have headed back to Kentucky about that time. Three years later Jesse enlisted in the Civil War at Camp Clay, Ohio in Company "H" of the Kentucky First Volunteer Infantry on May 10, 1861. Since Kentucky was a neutral state, men had to leave the state to enlist in either army. He was mustered out on June 18, 1864 at Covington, Kentucky.

On July 3, 1864 following his service in the military, Jesse Married Ethelinda McNorton in Allegheny City, Pennsylvania.

Ethelinda was born in Pennsylvania about 1842, the daughter of George and Pricilla McNorton. In his diary, Jesse

refers to her using the name Lilly which could have been either her middle name or a nickname. By 1870 Jesse and Ethelinda Hyde were living in Pleasant Grove Township, Greenwood County, Kansas. In his diary he mentions a sister

already living in Kansas during the war. At the time of the 1870 census the couple had two children, George M. Hyde,

According to family lore, the Hydes had moved again by the time the 1880 Federal Census was taken.  By that time they were supposedly living near the town of Bratton in Adams County, Ohio. However, census data for 1880 still has the family residing in Pleasant, so the move to Ohio likely came sometime after 1880 and before the Hydes' move to Washington State.

According to Jesse's application to the Orting Soldier's Home (Orting, Pierce County, Washington), he moved to Washington State in 1890. Jesse, George and Charles are listed in the 1892 Polk Seattle Directory. Their residence was in the Latona district which would have been on the outskirts, but is now a part of the city. George is listed as a molder and Charles is listed as a farmer.

When the 1900 Federal Census was taken Jesse and Ethelinda were living near Kellogg in Douglas County, Oregon, a little southeast of Roseburg. Jesse was now 68 years old, but still very mobile, having moved around the United States several times.  Charles was living with them and still unmarried at age 32. George was married to Jennie Shook in Livingston, Montana on June 6, 1900. Their daughter, Georgia, was born in Oregon in 1901.  Jennie passed away within the next nine years as George is listed as a widow in the 1910 census.

On March 10, 1906 Jesse was living in North Yakima, (present day Yakima) Washington. At time his son Charles was living at Black Rock a few miles east of town. Jesse applied for entrance into the Soldier's home in Orting, Pierce County, Washington stating that" I am unable to take care of myself and my wife is not able to take care of me." He states that he has two children ages 40 and 38, this would be George and Charles. He lists his next of kin as Mrs. E.L. Hyde of North Yakima.

Jesse was admitted to the Soldier's Home on April 17, 1906 and took up residence there for a half year. On September 1, 1906 he requested a discharge from the Soldier's Home which was granted.  Jesse wrote a letter from Black Rock back to the Soldier's Home addressed to Superintendent Willis L. Ames. In it he says, "I sit down to write you a few lines to let you know I got through on the cars all right the night after leaving the home and the next morning met both of my boys in North Yakima and my youngest son got a buggy for $5.00 and hitched his horses to it and brought me out home here we arrived in safety that evening and I have been here ever since and believe I feel some better in a general way in this high and dry climate. The 4th of December will soon be here and will ask a favor of your viz. That you will send me by return mail my pension certificate, coupon and Army Discharge, and any other papers that might be necessary for me

Jesse passed away at Black Rock on November 30, 1908.  His death certificate indicates son Charles was his Undertaker. Although there was some belief that his burial was in the Orting, Soldier's Home Cemetery. In actuality, however, internment was at the Black Rock Cemetery located near Moxee City in Yakima County. No marker identifies the grave site.