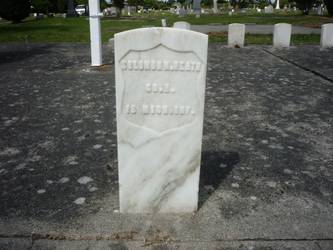 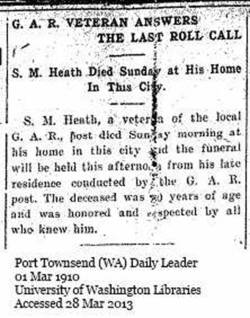 The 18th Michigan Infantry, a three year western theater regiment, was organized under President Lincoln’s 7/2/62 call for 300,000 more men to fill the ranks of the military services. The date of the call was a depressing one owing to the recent reverses that had overtaken Union Gen. McClellan's army on the Virginia Peninsula.

Counties of recruitment were Hillsdale, Lenawee and Monroe. Recruiting was so active that the ranks of the new regiment were quickly filled with the new being mustered into Federal service on 8/26/62.

The eighteenth left Michigan on 9/18/62 and saw its first active service in the State of Kentucky. There, the regiment protected several important places saving them from invading Confederate forces under Confed. Gen. Pegram.

In November, 1863 the 18th was assigned to provost (military police) duty in Nashville, TN. It would remain in Nashville until June, 1864 when it moved into Alabama where, during the summer and fall, it garrisoned the city of Decatur. During this latter period it did excellent service driving the enemy away from important towns - including Decatur - which they attempted to capture.

At Stevenson, AL the 18th helped construct strong fortifications before being ordered to Huntsville. It remained there until 6/20/65 performing garrison duty for the remainder of its existence.

NOTE: The following birth-to-death biographical profile of Civil War veteran Solomon Heath was made By Request. Its creation does not include any file information - military service, disability pension, homestead, etc. - which may be housed in the National Archives located in Washington, D.C. As a result, it does not contain the depth and details of many biographies within this website.

Solomon Morton Heath was born 1/24/30 in Caledonia County, Vermont. Likely, his community of birth was Cabot.

As noted by birth states of the Heath children at some point following the births of Solomon and Amanda, Merrill and family quitted Vermont for Michigan. Exactly when the move was made and why is not documented.

During the U.S. Census of 1840 the Heath's were tallied in Milan located in Monroe County, MI. A decade later, in 1850, they were in York Washtenaw Co., MI. At that time, Solomon was the oldest of the Heath children still living at home. He, like his father, listed his occupation as “farmer."

In 1860 Solomon noted his occupation as being "day laborer." In August, 1862 following in the footsteps of younger brother Charles he gave up that occupation to become a private soldier in the U.S. Army.

On 8/9/62 in Dundee Michigan Charles Heath had enlisted in Company "H" of the 18th Michigan Infantry. Two days later he was joined by older brother, Solomon. Both were mustered in to Federal service on 8/26/62. Later, on 1/19/64, the boys' father, Merrill, enlisted in and was mustered into the same unit and regiment.

Charles survived the war and was mustered out of the service 6/26/65 as a corporal. Private Merrill Heath would survive, but not make it to the end of the hostilities as on 9/18/64 at Decatur, AL he was granted a disability discharge.

Without having access to Private Solomon Heath's military service records we are not able to address his ups and downs while serving his country under arms. We do know, however, that he did survive the war. Also, in the U.S. Veteran Schedule/Census of 1890 he noted that as a result of his service he was still plagued by bouts of diarrhea. Although the files are not available, likely he was, in later years, granted a U.S. Government disability pension stipend based on this malady which he traced back to his period of civil War soldiering.

The War behind them, in 1870 the Heaths continued to reside and farm in or near Dundee Monroe Co., MI. A decade later, though, they were in Lincoln Calhoun Co., IA. In the meantime, on 6/15/77, Solomon was granted a (homestead) patent (deed) on land located in Missaukee, MI. With homestead records not at hand, it is guessed he applied for and was granted the land based on his Civil War service. How this Michigan land connects with the Heaths living in IA in 1880 is not known.

As we have seen, in 1890 Solomon and family were once more in Michigan. Again, when and why they departed Iowa and returned to that state is not known.

By 1900 the Heath family had departed the mid-west and were residing in or near the community of Dungeness located in western Washington State's Clallam County. Same old story. When they had made the move west and why is not known. The family as of that time consisted of Solomon, Harriet and their two youngest children, Grace (23) and Omer (18). Once again, Solomon was farming. This would be his last census.

Solomon Morton Heath died on 2/27/10. The cause of death is not known.  At the time of Solomon's passing the Heath family was residing in the Washington community of Port Townsend. Port Townsend is located in Jefferson County.  Burial was/is in that town's Laurel Grove Cemetery.