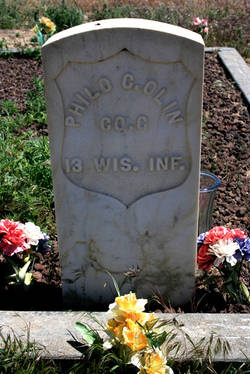 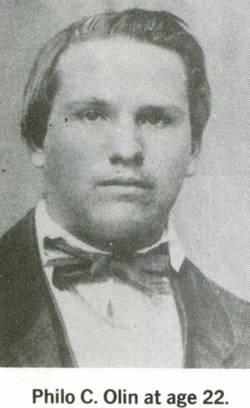 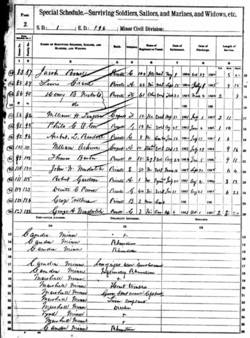 The 13th, a three year western theater regiment, was mustered into Federal service in October, 1861, but did not leave the state until the 18th of January, 1862. At that time it moved to Leavenworth, KS and from there to Fort Smith, AR to join the southwestern expedition.

Upon reaching Fort Scott, KS the unit was ordered to Lawrence, KS to join the New Mexico expedition, but that expedition

was abandoned. Ordered back to Leavenworth it then moved to Columbus, KY where it was placed on railroad guard duty

and, later, garrisoned forts Donelson and Henry in Tennessee.

The regiment next accompanied an expedition against Clarksville, TN. There, it routed the Rebels and captured a quantity of military stores. Scouting assignments followed.

After driving Confed. Gen. Forrest's cavalry through western Tennessee it marched to Stevenson, AL where it captured an enemy supply depot. It then successfully defended Huntsville and Decatur against Rebel incursions. The regiment also

On 12/31/64 Lieutenant Wagoner and thirty five men of Company "G." were captured by a force of 400 Confederates at Paint Rock River in Alabama.

1865. Following the fall of Richmond, VA the 13th was ordered to Indianola, TX. From there it set out on a march

to San Antonio. During this 145 mile trek the temperature reached 100 degrees causing many of the men to break down.  It was while stationed at San Antonio that the regiment was mustered out of Federal service and into history.

ED. NOTE: The birth-to-death biographical profile which follows was requested by a relative of Civil War veteran Philo C. Olin. It was created without the benefit of pension and other documents housed in the National Archives located in Washington, D.C., so does not contain the details and depth of research enjoyed by other profiles found within this website.

Elathee/Eletheer "Ella" (nee Chegney b. 1810 RI or NY) Olin. The Olins were a farming family.

As noted by the birth states of Emma/Eunice and Archibald, at some point between 1847 and 1850 the Olin family

quitted New York in favor of Wisconsin. Their community of resettlement was Spring Valley located in Rock County.

When on 8/25/63 Philo enlisted in the U.S. Army, he listed his place of residence as Spring Valley. Likely, then, he was still living on his parents farm.

Without having access to his military service records all we know about Private Olin's period of military service is that on 12/31/64 he was captured by the enemy at Painted Rock Bridge, AL. Further, no details are available pertaining to his capture, period of being a prisoner of war or when and how he was released.

War years behind him, it appears Philo returned to Wisconsin and married. His bride was Lucille “Lucy” Anna Atwood (b. 1845 PA). The Census for 1870 found he, his wife and son Charles (b. 1867 WI) residing in or near the Green County community of Brodhead. Philo's occupation at the time was noted as "laborer."

Most of the census for 1890 was destroyed by fire. Luckily, however, there is a surviving entry that year for Philo. All it tells us, though, is that he - perhaps alone - was residing in Mitchell, Davison County, South Dakota. There is no information about family, employment or anything else.

In 1905 Philo and Lucy were once again farming. This time they were in Lyon County, Minnesota. What had drawn them to that location and when is not known. Also in their home was married son Charles, his wife and three children.

On August 13, 1910 in Lynd, Lyon County, Minnesota Lucy died. No details are available pertaining to her passing. She was/is buried in the Lynd cemetery.

Later in 1910 Philo shows up in Pierpoint, Douglas County, Washington. Again, what drew him this far west is not known. His occupation was listed as "retired farmer." Except for a boarder, he was living alone.