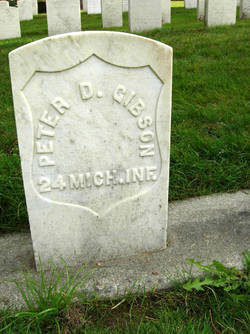 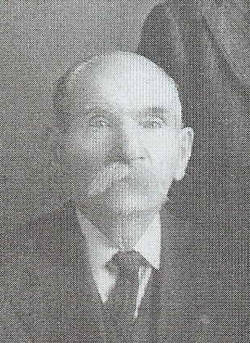 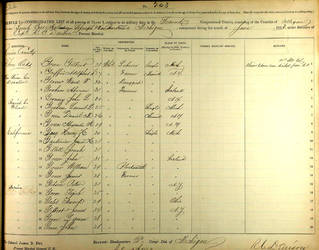 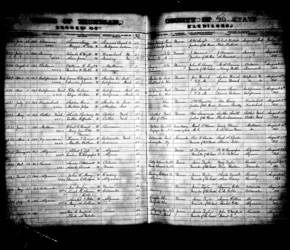 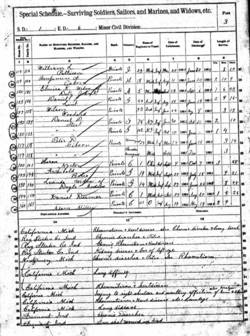 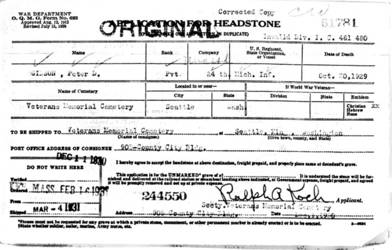 The Chandler Horse Guard was organized by William C. Hughes in Berrien Co., MI. It had only two companies, "A" and "B".

After having served three months the War Department, owing to some irregularity in the mustering in process, ordered the

Chandler troops be mustered out of Federal service and immediately re-mustered in with the muster process to conform to United States regulations. When the enlisted men of the command declined to be re-mustered, the unit was disbanded.

Private Peter Gibson enlisted in and was mustered into the 24th Michigan Infantry at the very tail end of the War Of The Rebellion. He was never assigned to an active company unit and never left the state to join the 24th before the shooting ended. As such, the history of the regiment is not being presented herein.

ED NOTE: The birth - to - death biographical profile which follows was created "by request" from one of Peter Gibson's family. It was written without the benefit of military, pension and other documental files housed in the National Archives located in Washington, D.C. As such it does not reflect the depth and detail of many other biographies found within this site.

Further, here it deserves to be noted that Private Gibson's two enlistments - one at the very beginning of the War and the other at the very end – are very unique in that neither instance did he leave the State of Michigan or face an enemy combatant. Still, because of the time he did spend in the service, albeit brief - over 90 days in each instance - he was and is considered to be a full veteran of the American Civil War.

As noted by birth states of the children, sometime following the birth of Peter and that of Albert, David Gibson and family quitted New York in favor of Michigan. Exactly when the move west was made is not known, but the family was residing in California, Branch Co., MI by the time of the 1850 U.S. census tally. Further, why the inter-state move was made is not documented, but likely it was the lure of new land to be farmed on the countries’ western frontier. Peter, as both a child

and an adult would spend many years in or near the community of California.

With the onset of civil war in America nineteen year old Peter, who was likely a laborer on his parents’ farm, enlisted in a Michigan cavalry unit known as the Chandler Horse Guard. After having served slightly over ninety days, the unit was disbanded and, as far as we know, Private Gibson returned to his family's farm.

A little over three years later the now 23 year old Peter again enlisted in the service of his county. His regiment on this occasion was the 24th Michigan Infantry. Following Federal muster on 3/24/65 Private Gibson was received as a new recruit at Camp Blair located in Jackson, Michigan on 3/29. From there, on 4/3 he was sent to Camp Butler located in Springfield, Illinois. While there he contracted chronic diarrhea and resulting disease of the heart. Thus, while he never experienced the privations of field service, Peter came home from war with physical ailments which would haunt him the remainder of his life and resulted in him being awarded a U.S. Government disability pension stipend.

It appears that after their wedding Peter and Elizabeth took up farming, perhaps in Coldwater, MI which was where son Bevie was later born. It may have been that they had taken over Peter's parents’ farm, in California Township. It is in California Township that the 1870 census found Peter as head of a household which included his wife Eliza, daughter Effie, Peter's father, David and his younger brother, Albert. A decade later they were still in the same location with the household consisting of Peter and Liza plus children Bevy and Myrtle. Where they were in 1890 is not known as most of that year's census was destroyed by fire.

1900. A new century, a new decade and a new census.  That population tally found Eliza Ann in Chicago Cook Co. Illinois' St. Lukes Hospital. Why she was there is not documented. The whereabouts of Peter and the children is not known.

Elizabeth may have died while in the hospital, but if so, details on when and why are not available. All we do know is that a decade later , in 1910, Peter, now a widower, was living in Fremont Steuben County, IN. Beyond having his "own income", no other data is available on the household.

1920 was to be Peter's final census. He died in son Bevie's Seattle King County, WA home on 10/30/29. As is often the case when and why the Gibsons had moved to Seattle is not known.

Also not known is the cause of the old soldier's death. Perhaps it was related to ailments that traced back to his days of Civil War soldiering. Perhaps not. In either case from Union Private Peter David Gibson was into his upper eighties when he passed.