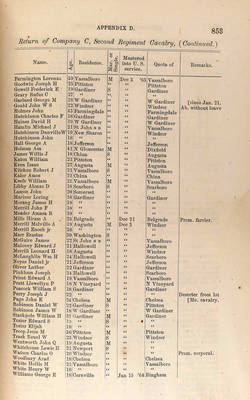 The 2nd, a three year western theater regiment, was organized in late, 1863. Upon Federal muster it was assigned to the Department of the Gulf where it remained throughout its period of service.

In April, 1864 the unit arrived in New Orleans, LA in five detachments. Companies "A", "D" and a portion of "D", the first to arrive, were ordered to Alexandria, LA to participate in the Red River Expedition.

August saw the 1st encamped at Barrancas, FL. There it was engaged in fatigue duty, participated in raids to nearby Marianna, FL and Pollard, AL. In each of these raids severe damage was inflicted upon the enemy with many prisoners and large quantities of stores being taken.

During the summer of 1864 the 2nd suffered much from the excessive heat of southern Louisiana. At one time only 450 men were able to report for duty and during the year the regiment lost by death 1 officer and 278 enlisted men.

On 2/23/65 elements of the 1st routed the enemy at Milton, FL. The regiment then moved to Pensacola and participated in the campaign which resulted in the capture of Mobile, AL.

After the fall of Mobile detachments of the regiment were stationed in various parts of western Florida to maintain the peace. On 12/1 it was assembled at Barrancas for final muster.

ED. NOTE: The biographical profile which follows was written "By Request." As such, it does not draw upon military, pension and other documents housed in the National Archives in Washington, D.C. For this reason it is not as detailed as other biographies found within this website.

Note: The names of those children that died during 1863 are on the tombstone of William and Dianthe.

On 12/3/63 William enlisted in the U.S. Army. His unit was Company "C" of the 2nd Maine Cavalry. Since his military service records are not available the ups and downs of his period of enlistment are not known. However, we do know that while in the 2nd he rose in rank from private to corporal.

As far as is known William returned to Maine following the War. Where he settled and how he was employed are not documented.

On 2/29/68 in Pepperell, MA William married. His bride was Maria M. Gray. Maria died before producing any children. No details are available pertaining her passing.

It appears that at least after his wife’s death William returned to his parents’ home. It was there the census of 1870 found him.

Noting the birth states of William and Anna's children, after marrying the couple settled in Massachusetts and remained there at least throughout the years during which their first two children were born. By 1880, though, they had moved to William's birthplace, Gardiner Kennebec Co., ME. Exactly when they moved there is not known. Also, not known is whether or not he and Anna took over his parent’s old farm as the U.S. Census for that year noted his occupation as "machinist."

The U.S. Census for 1890 was, for the most part, destroyed by fire, so we do not know where William and family   were residing at the beginning of the '90s. A decade later, however, William, Anna and all three children were in Gig Harbor, Kitsap Co., Washington. When and why they had made the move west to the Puget Sound area is not known.

1910. This census found William, Anna and daughter Eva May - a printer - still living in Gig Harbor. At that time William listed his occupation as "wage earner carpenter."

The beginning of the 1920s again found William living in Gig Harbor. Then, however, he listed himself as a widow(er). When Anna had died is not known.

Interestingly a listing in the Bremerton Kitsap Co., City Directory for 1920 indicated William was a resident of the Washington Soldiers' Home located in Retsil, Kitsap Co., WA. That being said, it appears William moved from Gig Harbor to Retsil during 1920.