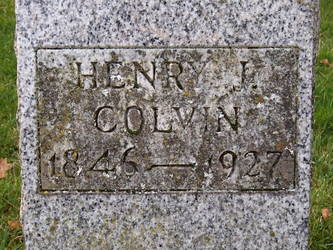 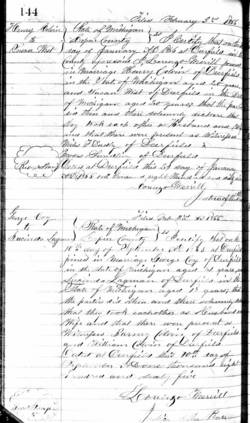 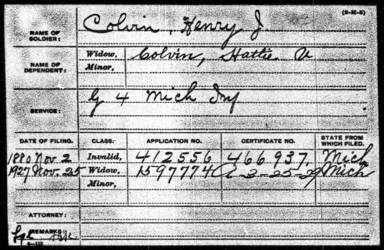 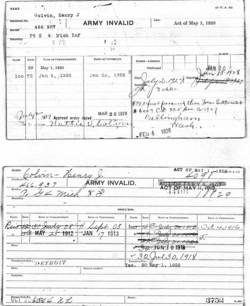 NOTE: The 4th Michigan Infantry, a three year eastern theater regiment, was organized in early 1861 and took to the field in June. It's original members were mustered out in June, 1864. A new 4th was then organized with new companies and 129 re-enlisted men from the old 4th. As this "Reorganized 4th" was a completely different regiment from its predecessor and served in the western, not the eastern theater, it was given a history of its own.

The reorganized 4th, a three year regiment, left Adrian, MI on 10/22/64 and proceeded to Nashville, TN. Thereafter it was engaged with the enemy at Decatur and New Market, AL

In March, 1865 the unit went by rail to Knoxville, TN then marched through East Tennessee. It returned to Nashville April 27th.

June, '64 saw the 4th embarked on transports and sent to New Orleans, LA. While there the detachment of re-enlisted veterans from the old 4th joined the regiment.

In July, '64 transports carried the 4th to Indianola, TX. From there it marched to Green Lake. The march proved fatiguing with the men suffering from the heat and scarcity of water. Some died, others were severely injured.

Reaching Green Lake the unit remained in camp for two months. The location of the camp being very unhealthy and the water band, there was a great deal of ill-health and death from disease.

On September 11th the 4th commenced a march to San Antonio a distance of 170 miles. After 14 days camp was made at Salida Creek about 8 miles from the city. There it remained for another two months before being ordered into San Antonio proper on provost (military police) duty. The regiment remained in Texas doing duty at various points until 5/26/66 when it was mustered out at Houston. It then proceeded to Detroit, MI where it arrived on 6/210/66, was paid off and disbanded.

Regimental losses: The total enrollment of the reorganized 4th was 1,300, and its losses 148, being one man killed in action, six died of wounds, and 141 of disease. This latter number was very large in view of the shortness of the term of service; but the service in Texas subjected it too long and severe marches in a hot climate, while its encampment at Green Lake was a most unhealthy one, causing much of the loss.

ED. NOTE: The birth – to – death biographical profile which follows was created “By Request.” This means it is based on U.S. Census data, family lore and whatever other information may be readily available pertaining to the veteran. It does not draw upon military, pension, homestead and other documents housed in the National Archives in Washington, D.C. As such, it does not reflect the depth of detail found in other biographies found within this website.

Henry John Colvin was born 7/30/46. His parents were Sanford P. (b. 4/2/22 Ontario Co., NY) and Eliza Emma (nee Dudley b. 12/18/26 NY) Colvin. According to Henry's U.S. Census reporting he was born in the State of New York. How this could have been-  with ALL of his eleven siblings including the one older and all those younger were born in Michigan - is not known. Perhaps someone who reads this feature can shed some light on the matter!

In 1864 Henry was residing in Marathon, MI. On 9/28 of that year, in his hometown he enlisted in Co. "G" of the 4th Michigan Reorganized Volunteer Infantry. Because we do not have available his military service records, we can't tell if he experienced ups and downs during his enlistment, but he did survive the War.

The U.S. Census of 1870 found Henry and Susan on a farm in Oregon, Lapeer Co., MI. Their farm was "next door" to that of Henry's parents. Henry, at that time, listed his occupation as "farm laborer."

Susan died - details not available - sometime between the census of 1870 and May, 1877 when daughter Lillian "Lillie" Belle Rose was born (Otsego Co., MI). Her mother, the new Mrs. Colvin, was Hattie Viola (nee Damouth/Damoth b. 10/28/56 Otter Lake Lapeer Co., MI) Colvin. When Henry and Hattie had wed is not known.

As of 1900 Henry and Hattie were still in Cheboygan, Cheboygan Co., MI. Again, Henry's occupation was listed as day laborer. A decade later they were in Michigan, but by then residing in Port Huron St. Clair Co. Henry's occupation at that time was "contractor."

1920. Another decade. Another census. That tally found day laborer Henry residing in Deerfield Lapeer Co., MI with married daughter Katie and family. Interestingly, although Henry noted that he was married, Hattie is not mentioned as part of the household.

Henry John Colvin died July 2, 1927 in Whatcom County, Washington. What brought him there and when is not known, but likely it was the presence of married son Clarence and family. Also not known is the status of his relationship with Hattie.  Interment was/is in Bellingham's Bayview Cemetery.

Hattie died in Bellingham on November 30, 1933. She was/is buried beside Henry at Bayview.