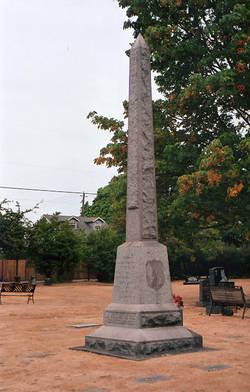 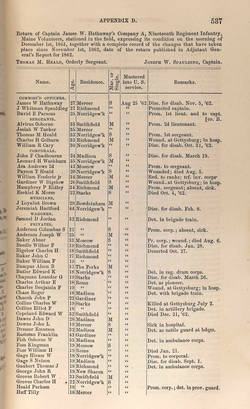 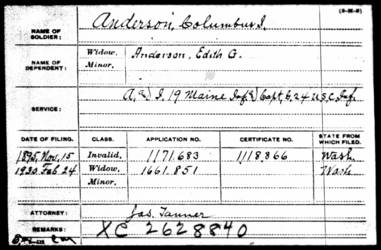 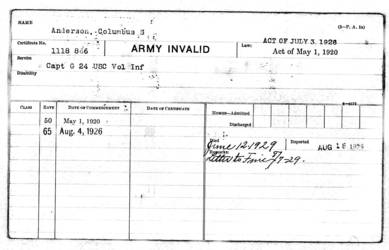 A large number of men in the 19th Maine, a three year eastern theater regiment, came from the mid-state, near coastal and coastal counties of Sagadahoc, Waldo and Kennebec. It was raised, organized and equipped in less than four weeks.

The 19th left Maine on 8/27/62 and moved to Washington City. It remained there on garrison duty until the end of September when it was transferred to Harper's Ferry, VA. On 10/1/62 it was under fire for the first time at Charlestown.

The 24th moved from Pennsylvania to Washington, D.C. on 5/5/65. There it did duty at Camp Casey until 6/1. During June through mid-July it was at Pt. Lookout, MD guarding Rebel prisoners. It then travelled to Richmond, VA where it remained until final muster.

NOTE: The birth - to - death biographical profile which follows was created "by request." As a result is not as detailed as some of the entries to this website because it does not draw upon veteran-related military, pension and other files housed in the National Archives located in Washington, D.C.

During the 1850 U.S. Census for The Forks Somerset Co., ME John listed his occupation as "laborer." A decade later in Richmond Sagadahoc Co., ME he was employed as a millman.

On 8/25/62 Columbus and his older brother Joseph enlisted in the U.S. Army. Their unit was the 19th Maine Volunteer Infantry. Both were in Company "A." Upon enlistment Columbus noted his occupation was "millwright. Both Columbus and Joseph would survive the War and move westward to live and die in Washington State. [1]

Columbus's military experience would prove very fruitful.  As a member of the 19th he would rise from the rank of private to corporal (1863) then second lieutenant (date unk.). While in the 19th he suffered one period of illness.

Exactly where Columbus settled after leaving the service is not known. By 1870, however he was residing in Bay City Bay Co., MI. His occupation at the time was working in a sawmill.

A decade later, in 1880, Columbus was still in Bay Co., MI. There on July 1st - in Bay City - he married to Gertrude Edith Lacker (b. 4/6/57 Bay City, Bay Co., MI).  In later years Gertrude would tell census takers she and Columbus had produced no children, but an 1892 tally in Washington Territory noted a K. Anderson (b. MI, aged 4 years) in their home.

In 1883 Columbus's parents, John and Betsey Anderson, departed Wisconsin and moved to Snohomish County Washington Territory. Making the move with them were sons Joseph, Columbus, Charles, John, Fred and Benjamin. At least for Columbus, likely the move was motivated by the region's burgeoning timber industry. In both 1889 and 1892 he noted his occupation as "lumber inspector."

During the decade of the'90s matters within the Columbus Anderson household seem to have gone awry.  The 1900 U.S. Census found Columbus in Orting Pierce Co., WA an "inmate" or resident of the Washington State Old Soldiers' Home. Had his health significantly failed? Available documents do not provide an answer to that question. Further, he listed his marital status as "single.” If they had not divorced it appears he and Gertrude had, at the very least, separated.

The census of 1910 found Columbus and Gertrude together again living in Ward 13 Seattle King Co., WA. During the ensuing decade, though, the couple had definitely divorced as the 1920 Seattle census found Columbus remarried to a Canadian-born (ca. 1853) woman identified only by her married name, Edith Gilda Anderson.

Columbus Stewart Anderson died 6/12/29 in Seattle King Co., WA. He was 86.10 years of age. Burial was/is in the Grand Army Of The Republic (G.A.R.) section of that city's (Ballard area) Crown Hill Cemetery.

It appears that after her divorce from Columbus Gertrude, returned to Michigan and remarried. Widowed, Gertrude Strong died on 9/1/40 in Bay City Bay Co., MI.

The second Mrs. Columbus Anderson? Her fate and final resting place are not known.