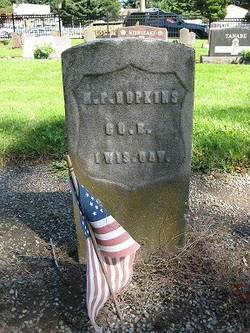 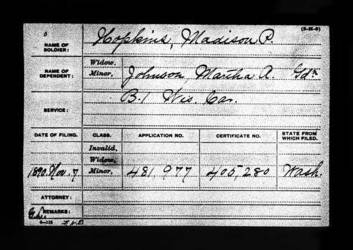 The 13th was a three year, western theater infantry regiment. Mustered into Federal service in mid-October, 1861 it remained in-state until January, 1862. It then moved to Ft. Smith, AR to join the Southwestern Expedition.

Upon reaching Ft. Scott the unit was ordered to Lawrence, KS to join a campaign into New Mexico. The mission however was abandoned. Ordered to Leavenworth, KS the 13th moved on to Columbus, KY where it was placed on railroad guard duty. Later, the troops garrisoned captured forts Henry and Donelson.

The 13th next accompanied an expedition against Clarksville, TN where it routed the Rebels and captured a quantity of army stores. From there it turned to scouting which resulted in a victorious skirmish near Garrets burg. Defending Huntsville and Decatur, AL preceded 35 men of the regiment being captured at Paint Rock River.

After the April, 1865 fall of Richmond, VA the 13th was ordered to Indianola, TX. From there it marched to San Antonio for final muster.  This necessitated a march of 145 miles which was undertaken in one hundred degree temperatures. Many of the men physically broke down.

The 1st, a three year western theater regiment, was organized during the summer and fall of 1861. It left the state in mid-March, 1862 and travelled to Benton Barracks near St. Louis, MO where it was equipped.

At the end of April the regiment moved to Cape Girardeau, MO and thence to Bloomfield. From there companies were detached to various points in Missouri and Arkansas for scout and train guard duty.

Although generally successful in contacts with the enemy there were exceptions. At L'Anguille Ferry, AR 130 men of the 1st were attacked by 500 Texas Rangers. Only 20 of the Federals escaped.

In August, 1862 the regiment reached Helena, AR. It was then ordered back to Missouri, a journey which was fought with terrible hardships. The men waded through swamps without adequate supplies or drinking water. Burdened by sick members, the unit was reduced to nearly one half its original strength. The 1st closed the year dispersing guerillas, picking up small groups of the enemy and foraging.

From January to May, 1863 the 1st was stationed at various points within Missouri. During this period it engaged the Rebels at Chalk Bluff (3/63). Then came the battle of Cape Girardeau (4/26/63).

Mid-year found the 1st at Nashville, TN and moving towards Chattanooga. It then was engaged at Chickamauga, GA (9/18 - 20). In December the unit repulsed an enemy force which had advanced on Mossy Creek.

1864 opened with the (1/17) battle of Dandridge, TN. The unit then moved in Union Gen. W.T. Sherman's Atlanta, GA campaign. This found the 1st active at Dallas (5/26 - 6/1), Burnt Hickory and Big Shanty to mention a few of their engagements. In November the regiment returned to St. Louis, MO to be remounted.

Returning to the field, the regiment reached Nashville, TN on 1/5/65. It next moved to Waterloo, AL and, from there joined a Union cavalry expedition led by Gen. Wilson. During this period the 1st was in the front ranks during the Union assault upon a fort overlooking West Point, AL.

In May a detachment of the 1st set out on a search for fleeing Confederate President Jefferson Davis. A few days later the advanced guard came upon armed men who ordered them to halt, and then opened fire. Firing became general until it was learned the opposing force of the supposed enemy was actually Michigan troops. Although Davis was not captured until after the Federals had fired upon one another, many ever believed the 1st Wisconsin was entitled to - at least some - credit for the capture!!

NOTE:  The birth - to - death biographical profile which follows was created in September, 2020 during the Covid-19 medical pandemic. In some areas it contains less depth and detail than other biographies found on this website because pension and other veteran-related files housed in Washington, D.C.'s National Archives were not available. Hopefully these documents will be accessed at a later time and the data contained therein added to this veteran's narrative.

The Hopkins family was a farming family. By the time of the 1850 U.S. Census they had departed Walworth County and were tilling the soil in Sylvester Green Co., WI. Census takers found them in the same location a decade later.

Madison first entered U.S. army in Oct., 1861. Without access to his military records all we know about this period of service is that he was discharged from the 13th Wisconsin Infantry for disability in August, 1862.

During September, 1863 Madison re - enlisted for three years in the U.S. Army. His regimental unit was the 1st Wisconsin Volunteer Cavalry. At that time we gain a glimpse of Private Hopkins the physical man. The teenaged farm boy was six feet tall, had blue eyes, brown hair and a light complexion. The enlistment garned him a $100 enlistment bonus or "bounty", $25 of which was paid up front with the balance to come in later increments or at the time of discharge.

Based on available military service records, it appears Madison's enlistment was fairly benign. He was neither killed nor wounded. Also, no sickness is noted. The only incident of note comes from May/June, 1864 when company muster records note that he was "absent" from his company and regiment because had been "dismounted." Without a replacement animal he was reassigned as a teamster on one of the divisional supply train wagons. This status lasted at least through the end of 1864.

Five Hopkins sons served the Union cause during the American Civil War. Only three returned home. And, they came back to a fractured family. Researcher Denise Otteson writes "Their mother had died in March of 1862 - an early death that spared her the grief of her first two sons' deaths. Their father and younger brother Clarence were the only family members who remained to welcome the brother’s home. ***** At a crossroads, the surviving family members made a typically American decision: they would go west to see what opportunities might await them.

The family went first to Iowa where, unfortunately, Parley died at the age of 52 years. He was/is buried in the tiny town of Burr Oak.

But then, there were happy times as well in Iowa. It was during the Iowa years that each of the Hopkins brothers found a wife. On 7/29/71 Madison married Martha A. Rogers. Prior to her marriage all we know about Martha is that she was born on 8/12/52.

Denise Otteson: “By the mid-1870s the Hopkins brothers became restless again. They decided to move on, this time homesteading in Dakota Territory. While there, their families grew, but we have no way of knowing how they fared as homesteaders. All we know for certain is that before 1880 farming seemed to have lost its enchantment for the Civil War veterans. Younger brother Clarence stayed behind, but the three older brothers decided to move on to Washington Territory.

By 1880 the three brothers and their families had arrived in the Puget Sound region of the Pacific Northwest. Once here, the Hopkins brothers finally went their separate ways. Edmund settled his family in Kitsap County. Albert eventually became a fixture in Gray's Harbor County where, in his later years, he was elected mayor of Aberdeen.

And Madison?  As of 1880 he and his family were residing in the White River area of south King County. With Madison listing his occupation as sawyer and, later, (1881) lumberman and (1883) mill man, it was undoubtedly the region's booming timber industry that helped at least helped draw him there.  As Denise put it “The forests of Washington must have soothed his spirits after years of the flat sameness that characterized the Dakota Territory."

By 1883 Madison's postal address was the community of Slaughter (present day Auburn), but he was actually residing in an area south of there known as Stuck. He had also established a small saw mill in Stuck.

In the meantime Martha's mother and sibling had settled in the Bellingham, Whatcom Co. area of Washington Territory near the Canadian border. She, Madison and their three children planned to join them there as soon as he could sell his sawmill.

This is where matters began to sour.  Territorial court records reveal that Madison made an agreement with a much younger man named John P. Stone which permitted Stone and a partner named Hubbard to buy the mill from Hopkins over time. Unfortunately, Stone and Hubbard missed the first payments on the sales note, and soon Madison heard rumors that the two men were selling off the mill equipment and dismantling the property. They had also failed to pay a company named Shea & Son for an order of saw logs meant to supply the mill.

During the summer of 1883 Madison confronted John Stone at the sawmill. Shortly afterwards, Madison filed a criminal complaint against Stone for threatening him with a gun - a charge that was later dismissed by prosecutors. Madison also testified against Stone when Shea & Son successfully sued him for payment for the saw logs.

In October, 1883 Madison engaged the same Seattle law firm that had represented Mr. Shea and filed his own suit against Stone and Hubbard. The lawsuit sought return of the mill property based on their default of the purchase agreement.

Based on the suit, the local district court issued a judgement against Stone. The court order granted Hopkins the authority to search Stone's residence for items belonging to him.  On 11/29/83, Thanksgiving Day, Hopkins accompanied by the precinct constable and four other persons went to Stone's house.

Upon stating their errand and showing their warrant, Stone told the group to go ahead and search as much as they pleased. He then left, but soon returned armed with a Spencer repeating rifle. According to later telling’s, the deputy began to exit the scene to seek help from men on a nearby work crew.  As he retreated, Stone urged on by Mrs. Hubbard (the mother of his mill purchase partner) shot Hopkins once in the chest and twice more as he lay helpless on the ground. The wounds would prove fatal.

Stone next pointed the weapon at the constable and others warning them to keep away. He then entered his house, changed into his best clothes, exited the dwelling out the back door and disappeared into nearby woods.

David Hart, a friend of Hopkins with whom Madison had earlier lived with for a time, took him into his home. There, he lingered for somewhere between two and one half and four hours, fully conscious and in agony. As he was attended by Dr. Hughes, a local physician Hopkins discussed his last wishes, even appointing an Executor for his estate before finally succumbing to his wounds.

Martha hastily made arrangements for her husband's burial in what is now known as the Auburn Pioneer Cemetery. She and her three daughters then fled northward to her Bellingham family.

In 1885 Martha and the daughters were still in Bellingham. Although Martha died on 5/19/22 in Michigan, her remains were returned to Bellingham for burial. She was/is buried in that city's Bayview Cemetery.

On a closing note, while the killing of Madison Hopkins appears to have been done by John P. Stone, no court or other records have ever been found to confirm this was what, in fact, happened.  As of this writing no documents pertaining to an arrest or legal proceedings leading to a conviction or an acquittal have been discovered.

** Melvin. No information has been located pertaining to Melvin's service and death.

***Albert served in Company "K" of the 22nd Wisconsin Infantry. He survived The War.

**** Edmond served in Company “E” of the 37th Wisconsin Infantry. He survived The War.

***** What had become of their sister, Helen, is an unknown!