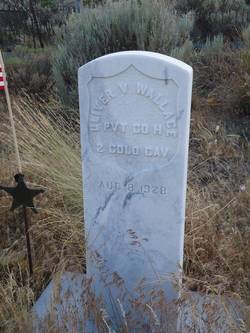 The 3rd a three year western theater infantry regiment was never fully organized. Six companies were recruited and mustered in between September, 1862 and January, 1863.

In the spring of 1863, except for some fraction groups left behind to recruit, those six companies, along with contingents from another incomplete regiment, the 2nd Colorado Infantry, were ordered into the field. They, then, marched across the plains to serve in Missouri and the District Of The Frontier.

During this period detachments of the 3rd and the 2nd saw hard service in both Missouri and the Indian Territory (Oklahoma). They were engaged with Rebel forces at Dayton, MO as well as Cabin Creek, Honey Springs and Webber's Falls in the Territory.

In October, 1863 orders were issued to consolidate the 3rd and the 2nd to form a cavalry regiment.

Upon the regiment's mounting it was placed on duty in western Missouri. There it was employed guarding the Kansas-Missouri border. This assignment involved numerous skirmishes with Rebel guerillas and other irregular forces. Actions included Sni Hills, Pleasant Hill, on the Little Blue, at Camden Point and Fredericksburg.

In 1864 the 2nd was ordered to Kansas for actions against hostile Native American Indians. That fall they also had to deal with the forces of Confed. Gen. Price when they threatened to overrun Kansas. When Price's troops were defeated, the 2nd joined in pursuit of the demoralized Rebels as they retreated across Arkansas into Texas.

During the remainder of The War the 2nd was stationed at Ft. Leavenworth and, by detachments, at other forts and outposts in that region. Its final assignments included holding numerous bands of hostiles in subjection as well as escort and scouting duties.

If the birth states of the Wallace children are correct, James began his family in his native Pennsylvania, then before the birth of Oliver removed from the Keystone State to Ohio. By the time of the birth of Harvey they had returned to Pennsylvania. Either that, or Rebecca went to the home of relatives in that state to birth her final child.

The next we learn of Oliver comes from the U.S. Census for 1860. At that time he was apparently residing with older brother Harvey in Mills Platteville Co., IA. Occupationally, both were employed as laborers.

By 1862 Oliver had drifted from California to Denver, CO. There, on 9/1/62 he enlisted in the U.S. Army infantry. Without accessing Private Wallace's military service records all we know about his enlistment tenure is that with the transformation of his regiment from infantry to cavalry, he stopped being an infantryman and became a cavalry trooper. Further, he survived The War.

Post war information pertaining to Oliver is, at best, murky. Where he initially settled is not known. However, it appears that by 1869 he may have been in the area of Santa Clara, CA.

A year later, in 1870, the U.S. Census definitely showed Oliver to be residing in Santa Clara where he was employed as a carpenter. Also, he had married.

By 1873 voter registration data place Oliver in or near San Francisco, CA. Seven years later, as of 1880 he, May and her son Frank were in Smith River Del Norte Co., CA. There, again, Oliver was carpentering.

The Civil War Veteran Registration of June, 1890 found Oliver in the State of Washington. He was residing in the small eastern state community of Waterville located in Douglas County. The U.S. Census for '90 was mostly destroyed by fire, so we don't have information on May. Nor do we have employment data for Oliver.

May died 8/6/00 in the Washington State Soldiers' Home located in Orting Pierce Co., WA. How and why she ended up there is not presently known. Also unknown is the cause of her death at age 50.2 years. Interestingly, she was not buried in Orting but in the Badger Mountain Cemetery located in rural Douglas County, WA. The U.S. Census for that same year tallied Oliver living by himself in the small, Douglas County, Columbia River community of Orondo.

The census for 1910 does not contain any information pertaining to Oliver. However, a census for 1915 noted his residence as being in Douglas County with rather cryptic references to Palisades, Columbia River and Withrow. Near this time there are also written references to him having possibly also lived in the Chelan County Community of Wenatchee.

The 1920 Census placed Oliver in Valley Precinct in Douglas Co., WA. In Valley he was still noted as being a carpenter.

Oliver Wallace died on 8/8/28 not in eastern Washington, but in the Orting Pierce Co. soldiers' home where May had passed away. Again, when and how he had arrived there is not presently known.

The cause of the old soldier's death was heart disease and influenza. He was aged 92 years, 5 months and 5 days. As with May, he was buried in the Badger Mountain Cemetery.