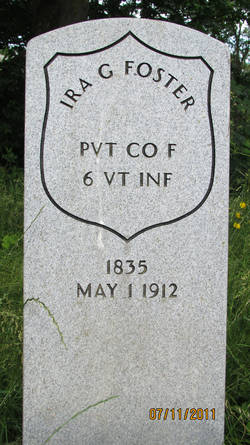 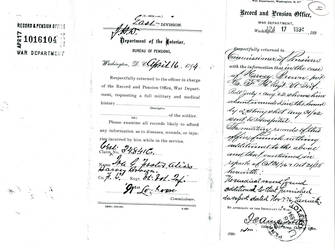 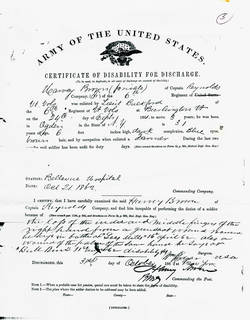 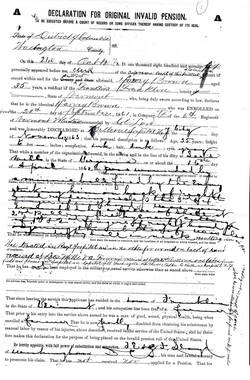 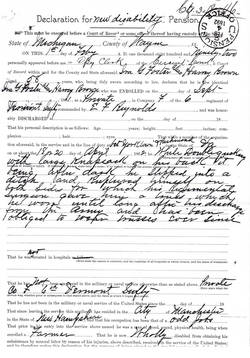 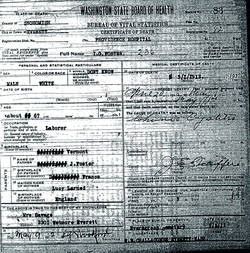 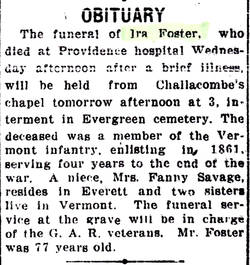 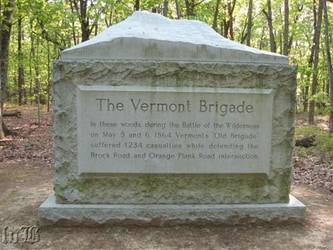 
The 6th, a three-year "eastern theatre" regiment left Vermont for the front only 33 days following its formation. Upon reaching Washington, D.C., it, along with the 2nd, 3rd, 4th and 5th Vermont regiments formed what came to be known as the Vermont Brigade.

During the winter of 1861/'62 the regiment suffered terrible losses, not from enemy bullets, but from sickness and disease. Its true baptism by fire came on 4/16/62 during the Peninsula Campaign battle of Lee's Mills, VA. The regimental loss was 23 killed/mortally wounded and 57 wounded. The unit was next under fire at the 5/5 battle of Williamsburg, but in actuality was in nearly all the battles and skirmishes during Union Gen. George B. McClellan's abortive attempt to capture Richmond. When the 6th finally arrived at Harrison's Landing on the James River its ranks were severely depleted both from enemy fire and disease.

On the heels of the Peninsula Campaign the 6th was within earshot of the late August 2nd Battle of Bull Run, but was not engaged. It next saw action in Maryland at Crampton's Gap and Antietam, before returning to Virginia to complete the combat year at Fredericksburg.

During the May, 1863, Chancellorsville Campaign the 6th was engaged once again at Fredericksburg before Marye's Heights. Action next followed in early July at Gettysburg, PA.  Thereafter it again suffered severely at the battle of Funkstown, MD where the Vermont skirmish line held its position against solid lines of battle all day without assistance, a feat "unparalled in modern history."

May, 1864, found the 6th in Virginia's Wilderness where it again suffered enormously. The Light Brigade at Balaklava lost 36.7%; the 6th in the Wilderness lost near 45% and held the field. Equally severe losses were endured at Spotsylvania where it was engaged at "the bloody angle." The Union debacle at Cold Harbor followed. The unit then moved northward to protect Washington, D.C. from rebel forces under Confed. Gen. Jubal Early. Action under Union Gen. Phil Sheridan in Virginia's Shenandoah Valley rounded out the original enlistees fighting career.

With the expiration of original enlistments in October, 1864, the 6th completed the War as a battalion of approximately 320 men. Actions during ensuing months included Petersburg, VA and movements leading to the 4/9/65 surrender of Confed. Gen. R.E. Lee's Army of Northern Virginia at Appomattox Ct. House.  In July, 1865 the 6th disbanded and its warriors quietly returned to civilian life in their home state.

*Note: Harvey Brown's true name was Ira G. Foster. Why his Civil War enlistment was made under an alias is not documented.

Although no documented birth date is found in papers pertaining to Ira G. Foster, and within those available he lists his age differently from time to time and place to place, likely he was born in 1835. This is based upon the fact that 1835 is the birth year given by his parents in the 1850 U.S. census. In 1850 and 1860 his birth family was residing in Montgomery, Franklin County, Vermont, so chances are very good that this was the locale of his coming into the world.

No information is available pertaining to Ira's childhood, formative, teenaged or early adult years. The first definitive information pertaining to him pertains to his enlisting in the U.S. Army in 1861. Even that isn't really that definitive as enlistment dates vary from 9/20 to 9/24/61. Further, the enlistment was under the fictitious name, Harvey Brown.

Private Brown's military tenure was not benign. On 4/16/62 during the battle of Lee's MIlls, VA he was struck in the back of his right hand by an enemy rifled minnie ball which injured his third and fourth fingers and resulted in treatment in the regimental hospital. Four days later, on 4/20, during the Union siege of Yorktown, VA, while carrying a full pack; he fell into a ditch and suffered a double hernia. Again treated in the regimental hospital, he was fitted with a supportive truss. On 8/28-29, although his regiment was not in action at the battle of 2nd Bull Run/2nd Manassas, VA,, not only was he was reportedly struck by a Rebel ball, but an enemy artillery shell fragment which removed the tips of his right hand's first and index fingers. The wounds resulted in his being taken to a hospital on Capitol Hill in Washington, DC and, later, to Bellevue Hospital in New York City, NY. From there on 10/31/62 he was granted a military discharge because of being incapable of performing the duties of a soldier. Why, one might ask, was he discharged?  The answer is that in the early years of the Civil War, prior to formation of the Veteran's Reserve Corps which placed disabled soldiers into behind-the-lines positions, private Brown's usefulness as a combat soldier were finished as the first and index fingers of the right hand were integral in loading and firing a rifled musket.

After leaving the military in 1862 Ira's exact whereabouts and activities are not known. Reportedly he returned to Franklin County, VT, but even there his presence is not documented until 1876 when he applied for a U.S. Government disability pension based upon  injuries and ailments stemming from his days of Civil War soldiering which rendered him partially disabled from performing manual labor. That the request was granted is acknowledged by the fact that, at death, he was receiving a $12 per month stipend.

The pension request behind him, Ira again disappeared, not to surface again until 1900 when he was residing in Baldwin, St. Croix Co., WI with his brother Daniel's daughter, Malinda Peabody and her family. According to family lore, that same year the Peabody’s and Ira moved westward to the Snohomish County City of Everett located in the Puget Sound area of western Washington State.

1910. Ira is noted by the census in the community of Sumner located near the City of Tacoma in Pierce county, WA approximately sixty miles south of Everett. In Sumner he was living in a boarding house with other boarders.

1912. Ira G. Foster alias Harvey Brown died in Providence Hospital in Everett, WA. Prior to death he had been living with Fannie Savage, another of brother Daniel's married daughters. His Everett Herald obituary noted that his passing came after a "brief illness."

Ira's death certificate noted only that he was "about 67 years of age" and a laborer. Cause of death was listed as chronic Cystitis, an inflammation of the bladder.  Even his niece, Fanny, did not know if he was widowed, divorced (or ever married).

The remains of Ira G. Foster/Harvey Brown were interned in Everett's Evergreen Cemetery under the auspices of that city's G.A.R. post. The fact that the burial was within the G.A.R. plot indicates that, in all likelihood, at death former Civil War soldier Harvey Brown was indigent.