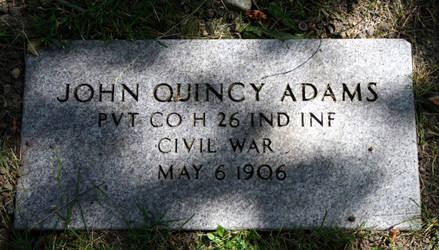 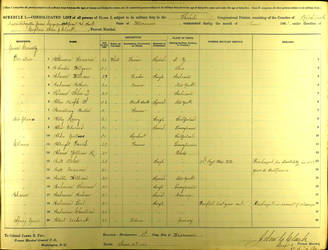 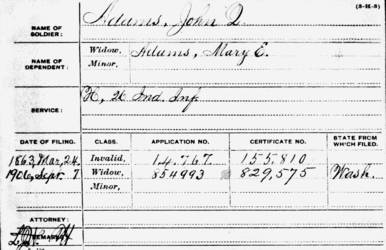 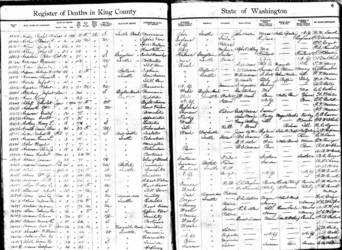 The 26th, a three year western theater infantry regiment was organized and mustered into Federal service at Indianapolis, IN. It left the state on 9/7/61 and reported to St. Louis, MO. There, it joined an expedition to Springfield.

Returning to Sedalia, MO the 26th engaged in railroad guard duty until July, 1862. It then moved into southern Missouri where it engaged the enemy at Newtonia, MO (9/30/63) and Prairie Grove, AR (12/7/62). At the latter place it lost heavily.

After Prairie Grove the regiment served on guard duty until 5/1/63. It was then ordered to join the forces of Union Gen. U.S. Grant before Vicksburg, MS. The 26th was active in the Vicksburg trenches until the fall of that city on 7/4/63.

On 9/29/63 the unit was actively engaged at Stirling's Plantation near Morganza, LA. Defeated, almost half of the 26th was captured. The prisoners were then taken to Tyler, TX where they were held for many months.

In October, 1863 the regiment accompanied an expedition into Texas. Landing at Brazos Santiago, they moved to Brownsville on the Mexican frontier.In February, 1864 many of the 26th re-enlisted as veteran volunteers. Thirty day furloughs took up much of April.Returning to the field on 6/1/64 the regiment was assigned to Garrison Duty at Ft. Butler LA. It remained there until the spring of 1865 when it was ordered to Mobile, AL where, in March, it participated in the siege of Spanish Fort.

With the capture of Mobile in April, 1865 the 26th was assigned to duties within that city. Shortly thereafter, however, it was moved to Meridian, MS and, from there, to Macon, MS.

A portion of the regiment was mustered out in September, 1865. Those troops remaining were discharged in January, 1865.

NOTE:  The birth - to - death biographical profile which follows was created in August, 2020 during the Covid 19 medical pandemic. It does not contain the depth of detail found in many other biographies found within this website because military, pension and other veteran - related bios housed in Washington, D.C.'s National Archives were not available. At a later time these documents will be obtained and the information therein added to this ACW veteran's narrative.

Based on scanty U.S. Census data, as best as can be determined, John Quincy Adams was born during October, 1832 in the state of Indiana. The names of his parents - born in Connecticut and New York - are unknown. Also not known is whether or not he had older and younger siblings.

The first we learn about John comes from his 8/30/61 enlistment in the U.S. Army. At that time he was residing in Queensville, IN. His unit of choice was the 26th Indiana Infantry. Beyond these tidbits, and the fact that he survived The War, we do not know anything about his period of military service.

It appears that as early as 3/24/63 former Private Adams applied for and was granted a U.S. Government disability pension based on injuries or ailments which traced back to his earlier days of Civil War soldiering. Until National Archival files can be obtained the details of this pension stipend will remain unknown.

Post American Civil War, the first available U.S. Census data pertaining to John is from 1900. At the dawn of the twentieth century he and his wife Mary E. (nee Owen b. 11/36 MI) were residing in the community of Birdsview located in Skagit County, Washington. In Birdsview John was the town's post master.

As of August, 2020 there is no available documentation on John and Mary's marriage or their subsequent family makeup. The only information we have is that Mary was married to Alpheus Weston and had 7 children. Alpheus died by 1900 and she remarried to John Qunicy Adams in 1894.

Former Civil War soldier John Quincy Adams died in Seattle King County Washington on 5/6/06. At that time he - and Mary - were residing in that city's Lakewood Addition.  Cause of the seventy five year old's death was noted as being "senility." Burial was/is in Seattle's Grand Army Of The Republic (G.A.R.) Cemetery located near the north end of that city's Capitol Hill.

Shortly after her husband's death, Mary made application to the U.S. Government to continue receiving at least a portion of John's pension stipend. Again, while it is known that the pension request was granted, the details of the stipend are not available.