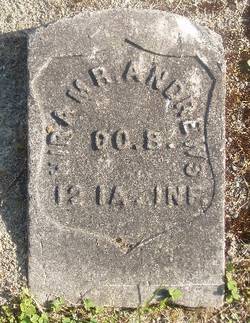 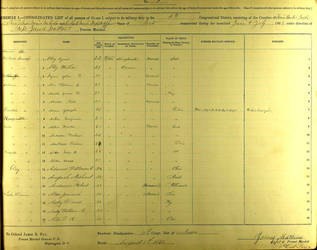 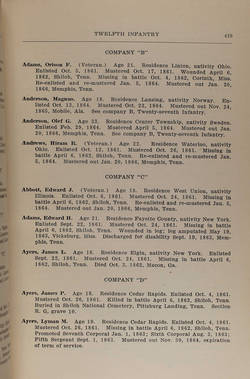 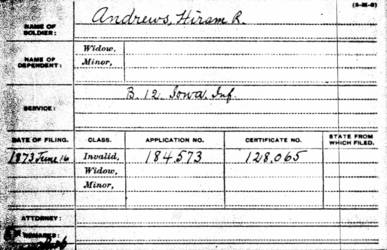 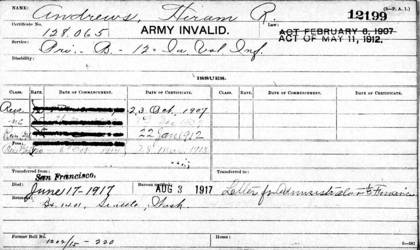 After being organized in Dubuque, IA this three year western theater regiment departed the state in late November, 1861 and proceeded to Benton Barracks near St. Louis, MO. It remained there until year's end and beyond.

At Shiloh/Pittsburg Landing, TN (4/6 - 7/62) most of the 12th was captured by the enemy during the first day's fighting. Paroled, they were not exchanged until January, 1863.

Returning to the field, 1863 saw the regiment reorganized around the first of April. The 12th then joined Union Gen. U.S. Grant's campaign to capture Vicksburg, TN. After the surrender of that city (7/4/63) the unit was engaged at Brandon.

In October the regiment was in a skirmish at Brownsville TX; proceeded thence to Vicksburg, MS, Memphis, TN, LaGrange and Chewalla. It remained on railroad guard duty at the latter location until near the end of January, 1864. During that period it broke up the guerilla bands that were pillaging the countryside and constructed a strong fort.

With most of the 12th having re-enlisted as veteran volunteers, those men were sent home on a 30 day furlough in March, 1864. Returning to the field the 12th moved to Memphis, TN. In July (14 - 15, 1864) the regiment was engaged in Tupelo, MS. Returning to Memphis, TN the regiment moved to LaGrange and thence to Holly Springs where it remained on duty for some period of time. In December the 12th was involved in the battle (12/15 - 16/64) to defend Nashville.

The regiment was ordered to Mobile, AL in February, 1865. With the capture of that city (4/12/65) it moved to Montgomery and on to Selma. It performed guard and garrison duties at the latter location until mustered out of Federal service.

Hiram Ransom was born in Ohio. No birth month or date has been found in available documentation. Birth years span 1839 to 1841. As 1840 is referenced several times that is the year being adopted within this profile.

Sarah had borne five children by Samuel: Benoni (b. 1809), Anson (b. 1810), Celesta (b. 1812) Asa (b. 1814) and Sally K. (b. 1816). Although there are no documented details pertaining to Sarah's passing, the fact that her final child was birthed the same year she died makes it highly likely the cause of her death was childbirth related.

In 1850 Hiram was residing in Wayne Ashtabula Co., OH with his widowed mother and four siblings. Six years later, in 1856, he and younger sister Rosetta were living in Union Allamakee Co., IA with their married older sister Lodema. What had prompted this move is not known.

As represented by the birth states of the Andrews children, after marriage Hiram and Temperance set up their household in Iowa. Perhaps their first residence was with or near that of Hiram's older sister with whom he had earlier resided. They would remain in Iowa for decades, so how son William came to be born in Wisconsin is somewhat of puzzler.

Dropping back a bit, a few short months after the birth of Claudius, Hiram left his wife and newborn son to join the army. While this absence may have been prompted by patriotic fervor, perhaps it was more the result of financial need. Although monetary enlistment bonuses or "bounties" were not as steep in 1861 as they would later become, they were a fact of life. Further, although the monthly pay of an army private was only $13 per month, that was a lot of money in the 1860s.

Without having access to Private Andrews' military service records we know little about his period of service beyond the fact that on April 6, 1862 during the first day of fighting at Shiloh/Pittsburg Landing, TN most of the 12th Iowa was captured and our private  went missing. Returning to his regiment, at some point in time, he re-enlisted as a veteran volunteer and served with the 12th Iowa Infantry until January, 1866.

The U.S. Census for 1870 found the Andrews family residing in Lafayette, Allamakee Co., IA. Hiram's occupation at the time was noted as "school teacher." A decade later, in 1880, they were still in Iowa, but by then residing in or near the Fayette county community of Fairfield. At that time Hiram's occupation was "route agent." The specifics of such job are not known.

On June 16, 1873 Hiram began the paperwork to obtain a U.S. Government disability pension based on ailments or other physical conditions that traced back to his days of Civil War soldiering. His application number was 184,573.

Between the time of the 1880 census and December, 1882. Hiram and Temperance divorced. Details of the breakup are not documented. Temperance would die on April 14, 1917 in Medical Lake Spokane Co., WA. For many years there was a hospital facility for the mentally ill in Medical Lake, so perhaps she had developed mental problems.

On December 2, 1882 in Dubuque, IA Hiram remarried. The second Mrs. Andrews was Martha Marie Willard (b. 1834 OH) daughter of Abraham Bennett and Nancy Lania. In 1910 census Martha said this was her 1st marriage. During their years together Hiram and Martha did not produce children.

As of 1910 Hiram and Martha were residing in Seattle King County, WA. What had drawn them to the Pacific Northwest is not known. Perhaps they had adult children and grand-children in the region. In the Puget Sound area Hiram's occupation was listed as "postal clerk."

Martha died in Seattle on November 21, 1915. No details are available pertaining to her passing. She was/is buried in Seattle's Capitol Hill Lake View Cemetery.

Hiram lived for not quite two years after Martha's death. He passed away in Minor Private Hospital in Seattle where he had been taken to 3 days prior on June 17, 1917.  The cause of death was Uremia Chronic interstitial nephritis and contributing factor was old age. Mrs. L W Renfrom was informant on death record. He was buried in the Seattle Grand Army Of The Republic (G.A.R.) which is located just north of the Lake View Cemetery.