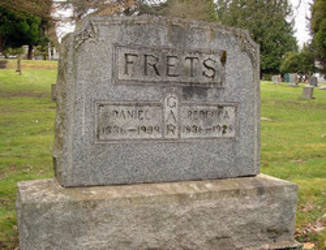 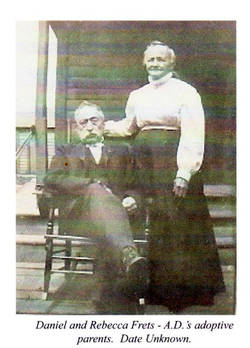 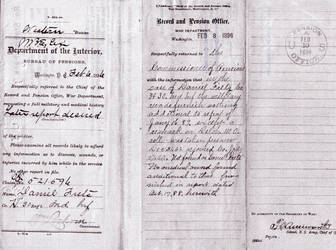 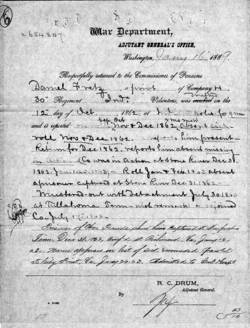 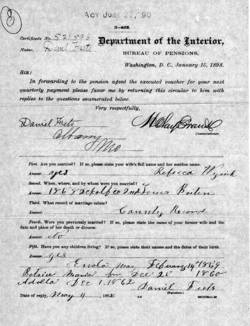 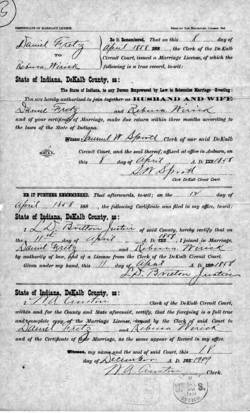 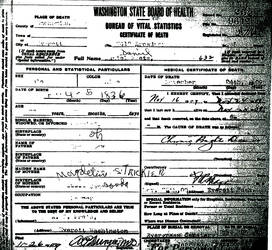 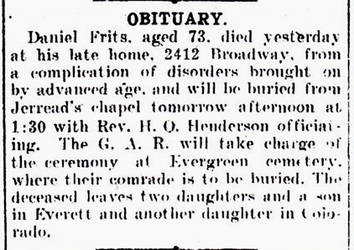 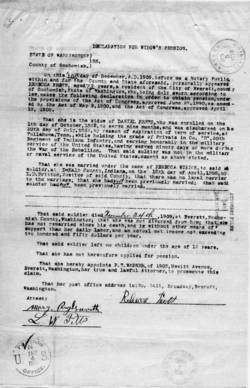 The 30th, a three-year "western theater" regiment left the State of Indiana immediately after Federal muster to travel to Camp Nevin, KY after which it moved with Union Gen. Carlos Buell's army to Munfordville and Bowling Green.

In March, 1862 the regiment found itself in Nashville, TN. From there, in early April, it moved to Pittsburg Landing/Shiloh where it incurred heavy losses during the second day (4/7/62) of that bloody battle. The unit was then engaged in the siege of Corinth, MS and, after the fall of that city, marched through Alabama, Tennessee and into Kentucky in pursuit of Confed. Gen. Bragg's retreating forces. It concluded the '62 combat year at Stone's River, TN where it again suffered heavy casualties.

In 1863 during the 9/18-20 battle of Chickamauga, GA the 30th again received severe punishment. It then moved to Whiteside and Tyler's Station, TN where, in December, a small number of men reenlisted.

The regiment spent the winter of 1863/1864 at Blue Springs, TN; it remained there until April, ‘64 when it embarked with Union Gen. Thomas on Gen. William T. Sherman's Atlanta, GA campaign, subsequently being involved in all the battles and skirmishes of that movement. Once in Atlanta, reenlisted veterans and new recruits were consolidated in a seven-company battalion.   Although late in the campaigning year, this battalion proceeded to move into East Tennessee before returning to Nashville to participate in the December battle which ousted Confederate forces from that City. The battalion then pursued the fleeing Rebels into Alabama before returning to Tennessee to spend the winter at Nashville.

In June, 1865 all of the 30th, except Co. "H", was sent to Texas. There it served as part of the army of occupation until mustered out of existence in late '65.

Daniel Frets was born in April, 1836 in Tuscarawas County, Ohio to George (b. unk. PA)  and Magdalena (nee Strickler b. Canada) Fretz. (Note: In later years both Daniel and brother John would claim their parents were born in Pennsylvania.) He was one of fourteen children in a family who traced their Frets lineage (mostly spelled Fretz) back to Germany with ancestors arriving in America in the early 1700s. Actual dates of his birth range from the 5th, and 6th to the 10th of the month.

No information is available pertaining to Daniel's childhood, formative or teenaged years. The first specific knowledge of his individual life comes from 1858 when, on 4/11 at Sedan, DeKalb County, Indiana he married Rebecca Weirick (b. 1836 Indiana). The union would produce three children: Enola May (b. 2/14/59 IN), Beatrice Maria (b. 12/25/60 IN) and Adolla A. (b. 12/1/62 IN). A fourth child, Archibald David (b.3/13/75 Waterloo, DeKalb Co., IN) to George Smith and Catherine Mortorff) was adopted into the Frets family before he was five years of age.

In December, 1862 5'11", blue eyed farmer Daniel entered the U.S. Army to fight for the Union. One source indicates he enlisted. A second says he was a paid substitute serving for some individual who could buy his way out of serving, while a third says he was drafted. His period of service was to be a mere nine months.

Military service records for Daniel indicate he was initially placed on "unassigned company" status before being mustered in to Co. "H". Once there, notations for 1862 indicate he was reported "sick" in November and taken prisoner on 12/31 during the battle of Stone's River, TN. (Note: brother George was reportedly also captured there). Daniel  was on "absent prisoner" status - a family notation says he was held in Libby Prison, Richmond, VA - until 7/17/63 when he rejoined his unit following a prisoner exchange. Less than two weeks later he, along with a detachment of his company, was mustered out of the service.

The military behind him, Daniel returned home to Sedan, IN. He and his family remained there for one year before moving to Auburn, another DeKalb County community. In 1870, the U.S. Census found the Frets still in DeKalb County, but then residing in Waterloo where Daniel’s occupation was noted as "railroad hand."

In October, 1879 the Frets family departed Indiana for the state of Missouri. There they appear to have settled in Albany in Gentry County. In Albany Daniel was a hotel keeper.

In 1888, while in Missouri, Daniel applied for and was granted a U.S. Government disability pension based on illnesses/ailments tracing back to his Civil War soldiering. The amount of the monthly stipend received up to his death, a portion of which his wife undoubtedly received until her passing, is not known.

Daniel and family remained in Albany for the next twenty two or three years. While the 1890 census is not available due to loss by fire, that for 1900 pointed to him having returned to farming.

On 11/24/03 the Frets left Missouri and travelled westward to the City of Everett located in Snohomish County, WA. Why they moved is not documented, but likely it was to be near adult children as their adopted son, Archibald, was living in that area.

According to his Washington State Death Certificate, former Civil War soldier Daniel Frets died 11/24/09 at his home located at 2412 Broadway, Everett. Cause of death was listed as "chronic Bright's (kidney) disease." His Everett Herald obituary wrote that his passing came "from a complication of disorders brought on by advanced age." At death Daniel was 73.8 years old. He was buried in Everett's Evergreen Cemetery.

Surviving Daniel was his wife, three daughters and adopted son. After his passing daughter Beatrice lost her own husband and moved into her mother's Everett home. The two were living in Everett before 1920 and, in the early '20s, in Tacoma, Pierce County, WA. About 1924 the two moved to Mt. Vernon, Skagit County, WA. It was there on 12/11/28 Rebecca died. She was subsequently buried next to Daniel.