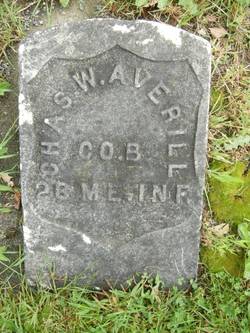 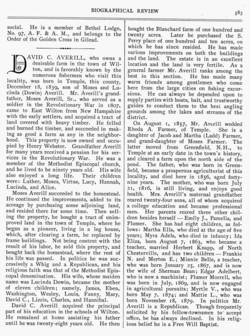 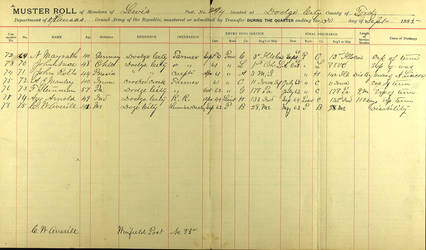 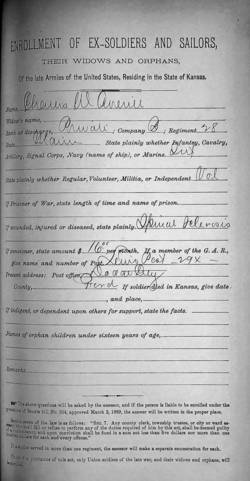 The 28th, a nine month western theater regiment, left Maine in late October, 1862 en-route to Washington, D.C. via New York. At that later place it was stopped and given orders to report to Ft. Schuyler (Bronx NY City)

Arriving in New Orleans on 1/29/63 it encamped seven miles below the city until 2/15 when it was ordered to Pensacola, FL. In March it returned to New Orleans and from there was ordered to Ft. Butler at Donaldsonville and Plaquemine.

On 5/26 six companies of the 38th were ordered to Port Hudson, LA. On 6/22 these troops, along with others, assaulted Rebel works at that location. During this attack the 28th lost 3 killed and 9 wounded.

Meanwhile, those companies of the 28th stationed at Ft. Butler was attacked by a superior enemy force, but repulsed them with heavy losses. The little garrison killed, captured or wounded more than three times its number. The Rebels then besieged the fort.

On 7/4/63 the six companies at Port Hudson received orders to assist their besieged comrades. The regiment was then stationed at Baton Rouge, LA until it started for Maine via Cairo, IL. It arrived there on 8/18 and was mustered out on the 31st.

NOTE: The birth - to death biographical profile which follows was created utilizing a "By Request" format. This means that veteran-related military, pension, homestead and other similar files located in the National Archives in Washington, D.C. were not obtained. As a result, the text does not include the depth of detail found in other profiles posted on this website. Finally, without access to those files to corroborate family information, some of the data presented herein may be subject to error.

Charles W. Averill was born on January 27th. His birth year was either 1843 or 1844. Because a database source indicates he was 19 years of age when he enlisted in the U.S. Army, herein we will adopt the 1843 year knowing full well that this date may be incorrect. Finally, while it is not documented, based his family history, Charles's place of birth was likely Wilton Franklin Co., ME.

The parentage of Charles is also subject to question. According to Death Record he was born to William and Jane (Williams) Averill. However, research conducted by Civil War Veterans Buried in Washington State staff points to his parents being Moses(b. 1798 NH) - d. 2/11/87 ME) and Lucinda (nee Dowin b. 3/04 Kennebec Co., ME - d. 9/25/73 Wilton Franklin Co., ME) Averill. Moses's occupation was an agriculture farmer.

In 1850 census Moses and Lucinda and children were living in Wilton Franklin Co. ME and Moses was noted as a farmer. By 860 Charles was residing, not in the home of his parents, but in the Wilton Franklin Co., ME household of married brother, James. James was a farmer. Another likelihood is that this was where and with whom Charles was residing when, in October, 1862, he enlisted in the U.S. Army.

Without access to his military service records we do not know how Private Averill fared while in the service. We do know, however, that he was discharged early because of a medical disability. We do not know the details of that disability.

At the time of the 1870 U. S Census Charles was still residing in Maine, but by that time address community was the Franklin Co., community of Temple. In Temple he was the head of a farm family consisting of himself, his wife - Sultina J. (b. 1851 ME) and one month old Maine - born daughter, Mary J.

1880. Another decade. Another census. By 1880 Charles and family had quitted Maine and were farming in or near the community of Peculiar located in Cass Co., MO. The move had been made sometime between 1876 and 1880, but what had drawn them there is not known.

Whatever the reason, the Averills did not remain long in Missouri. By 3/1/85 they had removed to Dodge City Ford Co., Kansas. There, Charles listed his occupation as "lumber dealer."

After 1885 the time line for the Averill family becomes blurred. Most of the U.S. Census for 1890 was destroyed by fire, so we have no information for that period. Also, nothing can be found for either Charles.  Sultina was living in Dodge City Ford Co. KS in 1900 with sons Charles and James and was noted as a laundress.

In 1905 Sultina is still residing in Dodge City Kansas, but only with youngest son James E in her home. Charles is nowhere to be found.....................While obviously the couple had separated, there is no indication they ever divorced.

Charles surfaces again on 7/6/06 in Los Angeles. CA. Tragically, by then a "solicitor" salesman by trade, he was convicted of a felony crime and sentenced to time in Folsom prison located in Sacramento, CA. He was released from that facility on 3/7/08.

Exactly where Charles landed after being released from prison is unknown. As of 1910, though, he was in Seattle King County, WA. Although his wife, Sultina was still living, he characterized himself as being "widowed." His occupation at the time was still "solicitor collection."

Charles W. Averill died 3/31/12 in Providence Hospital in Seattle, WA of Lobular Pneumonia followed by cerebral hemorrhage. He was 68 yrs. 3 mos. and 3 days old at time of death and was noted as divorced. Charles was/is buried in the Seattle G.A.R. Cemetery. His gravesite is marked by a Civil War headstone.

FOOTNOTE:
Sultina died in April, 1918 in Albuquerque Bernalillo Co., NM where she had been living with son James. Her final resting place is in the Maple Grove Cemetery located in Dodge City, KS.