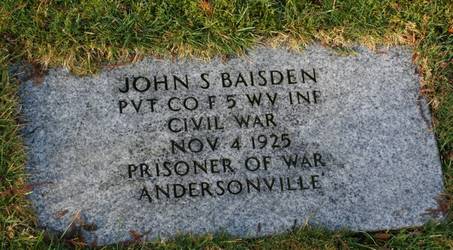 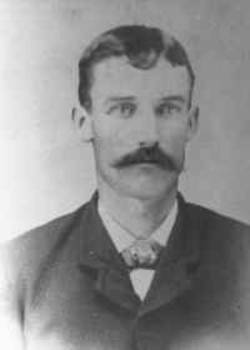 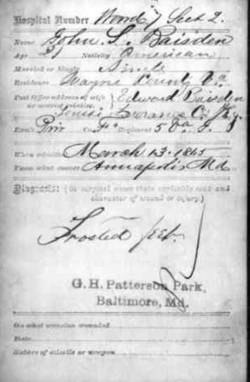 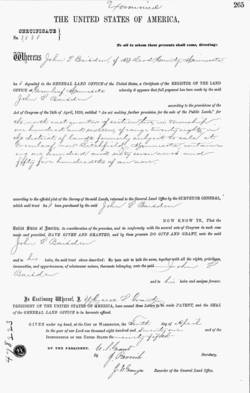 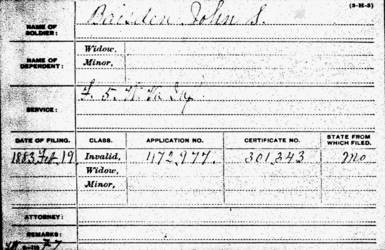 Not long after the April, 1861 onset of the American Civil War the mountainous sector of Virginia split off from the piedmont sector. On 6/20/1863 it became the state of West Virginia.

No detailed history of this three year eastern theater regiment is available. It is known, however that the 5th served in West Virginia and Virginia until the expiration of its term of enlistment.

Troops that did not re-enlist as veterans were mustered out in September and October, 1864. Special Order No. 391 dated 11/9/64 then consolidated veterans and new recruits with the 9th WV Infantry to form the 1st WV veteran regiment which served until 11/9/1864 when mustered out in Wheeling, West Virginia

John Smith Baisden was born 2/12/43. His birth state was Virginia. During the American Civil War, however, the region where he was born became part of the new state of West Virginia.

On October 18 1881 John enlisted in and was mustered into the 5th West Virginia volunteer infantry. Enlisting in the same unit on the same day was Edward Baisden. John does not appear to have had a brother named Edward, so it is very possible that `- although he was much older than the average 27.5 year old civil war recruit - that this was John's father.

It appears that not long after leaving the U.S. Army John relied upon his military service record to settle on homestead land in McCleod Co., MN. Although the homestead files have not been consulted, primary evidence points to him having been granted the patent (deed) to the property parcel on 4/10/71.

John remarried 11/30/1865 to Martha Hatten (8/31/1852/MN d 9/24/1934/Skagit Co. WA) on 8/8/1874 in Buffalo Wright Co. MN.  Following their marriage John and Martha settled into farming in McCloud Co., Minnesota. In 1875 their location was Hale McLeod County. When their first child was born the birth was in Silver Lake, McLeod Co., MN. It is unclear either of these locations was the previously noted homestead parcel.

As noted by the birth states of the Baisden children, John and Martha did not live out their lives in Minnesota. By March, 1877 when Theodore was born, they had quitted Minnesota and were farming in or near the community of Jefferson City located in Harrison Co., Missouri. Neither what had prompted the move nor exactly when it occurred is not known.

When Samuel was born in January, 1879 his birth location was reportedly in Harrison County, but not in Jefferson City. Instead, the community of Bethany is noted. The significance of this community change is not known.

Next comes a real ringer. Leonard was born in Woodland Decatur Co., IA. Did the Baisden family move there from Missouri? Likely not. Did Martha travel to give birth in the home of relatives? Likely we will never know the answers to questions like this.

By the time John, Jr. was birthed in April of 1889 the Baisdons had definitely moved. In fact, they had removed from Missouri to Colorado where they were residing in Durango located in La Plata County. Again, answers to the when and why questions are not available.

The youngest Baisden child, Paul was born in Colorado. Then, for whatever reasons, the family pulled up stakes and moved to the Puget Sound region of Washington State. When and why are once again unknowns, but the family was here residing in Seattle, King Co., WA as of the U.S. Census of 1910. With John and Martha in their Ward 10 home were youngest sons Leo, John and Paul.

The 1920 census was the last for John. Reportedly still married, he died in his home at Sedro Wooley Skagit Co., WA on 11/4/25 at the age of 82. Burial was/is in the Seattle Grand Army Of The Republic (G.A.R.) Cemetery.

After John's passing Martha remained in Seattle for at least another five years. The census of 1930 found her in the home of grandson Oliver. After that, however, at some point she moved northward to the Skagit County community of Sedro Woolley in the rural home John and she had shared. She died there on 9/24/34. She was/is buried at Acacia Memorial Park Cemetery in Seattle King Co. WA.